Phosphorous in Poultry Litter: Guidelines from the University of Delaware

Delaware produces more than 250 million broiler chickens each year, making poultry production the single greatest contributor to state agricultural receipts. It also means that about 280,000 tons of poultry litter (manure and bedding material) are produced annually. Most of this litter is applied to agricultural fields as a source of nutrients, primarily nitrogen (N) and phosphorus (P), for crop production.

Phosphorus is an essential nutrient for plant growth. However, many crops, such as corn, require only one-third to one-fourth as much P as they do N for economically optimum yields. Since poultry litter contains about the same amounts of N and P, this means that P has often been over-applied to agricultural fields. Over time, this has caused a buildup of P in many Delaware soils to values well above those required for optimum crop yields. This is a concern because increased soil P levels can contribute to a greater risk of P loss to the environment (Sims et al., 2000) and lead to ecological problems, such as eutrophication of surface waters (Sharpley et al., 2003).

How is the Phosphorus Issue Being Addressed in Delaware?

Delaware has taken a number of positive steps to address the environmental problems associated with "high P" soils, including:

Most U.S. states have addressed this issue by placing restrictions on land-application of poultry litter (or other P sources) to soils considered "high" in P. For example, the Delaware Nutrient Management Act (Delaware Code, 1999) stipulates that "high P" soils can receive no more litter or fertilizer P than is removed by crop harvest during a 3-year planning period. The Delaware Nutrient Management Commission (DNMC) currently defines a "high P" soil as one with a soil test P value > 150 FIV (fertility index values, equal to 150 ppm Mehlich 3-P). This approach prevents the continued over-application of P to cropland and should lead to improvements in water quality. However, limiting litter applications to crop P removal requires more land to use the poultry litter generated in Delaware today. Many producers who had previously used poultry litter to supply N to crops also must now purchase commercial fertilizer N to meet crop needs, thus increasing their production costs.

Alternative uses for poultry litter are also being investigated, such as pelletization to produce a fertilizer material that can be exported to regions with nutrient deficits. A DNMC sponsored manure re-location program also helps farmers with excess manure identify off-farm locations where they can export manure surpluses.

Corn and soybeans are the major feed ingredients in poultry diets (NRC, 1994). About two-thirds of the P in these grains is phytic acid, a form that is poorly digested by poultry. The result is that most of the P in grain fed to poultry is not digested, so it passes through the birds and ends up in the litter. It also means that poultry diets must be enhanced by adding more digestible forms of P such as calcium phosphate (Angel et al., 2001). These dietary factors have contributed to high P concentrations in poultry litter and to the buildup of P to high levels in Delaware soils.

Extensive research in the past 10 years has shown that poultry diets can be modified to reduce litter P concentrations from 25 to 50%. Diets modified to reduce P excretion have been widely adopted by Delaware poultry companies, resulting in the need for new guidelines on the P content of poultry litter. This fact sheet provides updated recommendations by the University of Delaware on the P content of poultry litter. It also discusses the implications of reduced litter P concentrations to ongoing statewide efforts to improve nutrient management and protect water quality. 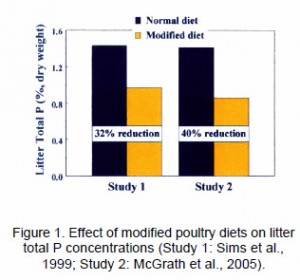 While there are several approaches that can be used to reduce P excretion by poultry, the most successful to date has been the use of phytase in poultry diets. Phytase is an enzyme that helps broilers, and other non-ruminant animals (e.g., swine) utilize more of the "indigestible" (phytic acid) P in feed grains. Including phytase or other feed additives in diets also means that supplemental P additions to diets (i.e., calcium phosphates) can be reduced, resulting in significant decreases in litter P concentrations (Figure 1; Maguire et al., 2004; Nahm, 2002; Sims et al., 1999; Yi et al., 1996). These reductions in litter P can be achieved without any adverse effects on poultry production, bird health, or carcass quality.

Improved Poultry Diets Have Been Widely Adopted in Delaware
The Maryland Water Quality Improvement Act of 1998 required that all contract feed for poultry must include phytase (or another enzyme or additive designed to reduce P content) by December 31, 2000 (Simpson, 1998). Although this law applies only to Maryland, because of the proximity of Delaware and the eastern shore of Virginia, this requirement effectively mandated that all poultry feed on the Delmarva Peninsula contain the phytase enzyme. Each year, the major poultry integrators provide a report to the DNMC, indicating the steps they have taken to improve nutrient management. These reports clearly show that modified diets, including those with phytase, are now commonly used in Delaware. This has resulted in major reductions in the amount of P being fed to poultry. For example, in 2005, three poultry integrators reported 100% use of phytase in their broiler diets. One stated that modifying diets with phytase reduced the amount of P being fed to broilers in their operations by 690 tons per year. Another reported total reductions in P fed to their broilers of about 2,100 tons per year.

Based on a series of large, on-farm surveys of litter nutrient content, Delaware has used similar "book values" for litter P (Binford et al., 2001; Malone et al., 1992; Sims and Luka-McCafferty, 2002). However, it is now apparent that the widespread changes in the amount of P being fed to broilers in Delaware have significantly reduced the P content of poultry litter. This is illustrated by recent summaries of broiler litter analyses from the Delaware Department of Agriculture's (DDA) manure testing laboratory (Table 1). 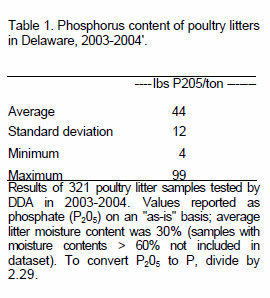 The DDA results suggest that litter P contents in Delaware are now about 30-40% lower than in the past, which is consistent with University of Delaware research on the value of modifying diets to reduce litter P content (Figure 1). The wide range in litter P observed also illustrates the importance of regularly testing litters for their nutrient content. 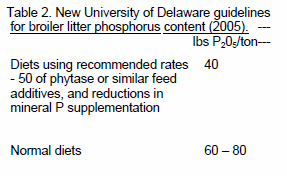 Improved dietary phosphorus management by Delaware's poultry industry calls for a revision of the "book values" for litter P in Delaware. These new guidelines are shown in Table 2 and are based on: (i) extensive research on the effects of modification of poultry diets on litter P, conducted at the University of Delaware and elsewhere; (ii) documented reports on changes in poultry diets reported to the DNMC by Delaware's poultry integrators; and (iii) current results from the DDA manure testing laboratory.

Implications for Agriculture and Water Quality

Many Delaware farmers have significant amounts of cropland that are considered "high" in soil P. The DNMC restricts litter P applications to "high P" soils in a 3-year period to the amount removed in the harvested portion of crops grown in that same period. For example, a typical 3-year crop rotation of corn-wheat-soybeans-corn would remove 190 lbs P2O5/acre (Sims and Campagnini, 2002). Litter produced using "normal diets" contains -70 lbs P205/ton. Thus, a farmer could apply about 2.7 tons of litter to this rotation every 3 years. Litter produced using "modified diets" contains -45 lbs P205/ton, so 4.2 tons of litter could be applied to corn every 3 years.

Applying higher litter rates allows farmers to take advantage of the other plant nutrients, particularly N, and organic matter in litters without increasing soil P values. Research has shown that modifying diets to reduce P excretions has no effect on litter N (McGrath et al., 2005; Sims et al., 1999). Typical litter N contents in Delaware are -60 lbs N/ton, of which -60% is available to crops in the first year. In this example, a farmer can apply 1.5 tons more litter per acre (4.2 vs. 2.7 tons/acre) to the first-year corn crop, without increasing soil test P, because the litter has a lower P content. The extra 1.5 tons of litter provides -55 lbs plant available N/acre, reducing the farmer's need to purchase fertilizer N for the corn which is an economic savings.

An alternative strategy, one that would eventually reduce soil test P values from "high" to "optimum", would be to apply less litter P than is removed by crop harvest. For example, applying 3 tons per acre of litter produced from a "modified" diet to the crop rotation in this example would add -135 lbs P2O5/acre, compared to crop P removal of -190 lbs P205/acre, and still provide -110 lbs plant available N/acre.

One cause of the large number of "high P" soils in Delaware has been the surplus of P on poultry farms, where P inputs (feed, fertilizers) have historically exceeded P outputs (animals, harvested crops). This excess P accumulated in poultry litters which were then applied to crop land, eventually causing a buildup of soil P to values of concern for water quality. It is well-known that nutrient "imbalances" occur where animal production is geographically concentrated, often leading to water quality problems with P (Beegle et al., 2002; Slaton et al., 2004). Consequently, achieving nutrient balance, at all geographic scales, is a vitally important goal for the long-term, sustainable management of poultry litter in Delaware.

Improving poultry nutrition has clearly been a major step towards nutrient balance in Delaware, not only for individual farms, but for the state as a whole. As noted above, modifying poultry diets has reduced feed P inputs to Delaware farms by thousands of tons per year. This, in turn, should lead to reduced on-farm and watershed-scale P surpluses and should also decrease the over-application of P to crop land. Other ongoing large-scale nutrient management initiatives (e.g., manure pelletization and manure relocation) should also contribute to an improved nutrient balance for Delaware.

It is important to remember that as nutrient balances improve, management of existing "high P" soils remains a challenge for Delaware agriculture. Identifying fields with the greatest risk of P loss by use of the P Site Index (Leytem et al., 2003) and increased adoption of farm-scale best management practices (e.g., buffer strips, cover crops, residue/tillage management, improved manure storage and application) will still be needed to minimize P losses to water.