Salt water that washes over agricultural fields during storm events and extreme tides can severely degrade a soils’ ability to produce traditional crops like corn and soybeans. This is already happening to some of Delaware’s coastal farmers and the frequency and extent of these flooding events may increase in the future as a result of climate change and sea level rise if no other preventative measures are implemented. 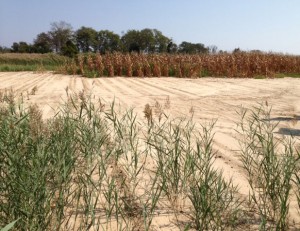 UD Cooperative Extension, in collaboration with other partners, is investigating an alternative salt tolerant crop that may be able to sustain the productivity of these impacted lands.

Seashore mallow is a perennial wetland plant native to the east and gulf coasts of the US and can therefore tolerate salty soils. For the past 10 years, UD researchers in the College of Earth, Ocean, and Environment, have been studying the plant, its ability to be cultivated as an alternative agriculture crop, and potential marketable products.   Marketable products are possible from both the seeds and stems and the plant itself provides ecosystem services. See the “Adapting to Sea Level Rise: Economic and Ecologic Roles for Seashore Mallow” factsheet below for a full description of the many potential uses of seashore mallow.

A recent small pen study has shown that the chipped stem material proves promising as a new, local, source of poultry house bedding. If additional research and assessment support these findings, there is great potential for the use of seashore mallow by the Delaware and Delmarva poultry industry as the traditional bedding material, pine shavings, have decreased in availability and increased in cost.

We are interested in building relationships with farmers with salt-impacted lands to assess the interest and feasibility of growing seashore mallow to support our research needs and develop this new poultry bedding market. See both the “Should I Consider Planting a Test Plot of Seashore Mallow in One of My Fields?” and the “Provisional Seashore Mallow Planting, Growing, and Harvesting Protocol” factsheet below to learn more about where seashore mallow is appropriate and what is involved with growing this alternative crop.

If you manage salt impacted agricultural lands, we want to hear from you!