Although seashore mallow has application in inland saline or non-saline situations these thoughts are particularly about problems driven by climate change and sea level rise and its impact on the coastal ecotone. As sea level rises, perhaps at a more rapid rate than earlier in our lives, low lying farm fields that are often very productive under dry land cultivation and their buffers will become salinized, as will rivers, and some aquifers. Non-salt-tolerant nutrient management buffers between housing and other development will be lost and perhaps replaced by invasive species. Recent storm tides provide such evidence in coastal farm fields where, unless a “nurse crop” is present to encourage the growth of desirable wetland plants, Phragmites often colonizes the vacated land and in woodland borders. These thoughts have led us to use the term, “self- subsidizing” and to look for multiple products and services that could be obtained from seashore mallow to subsidize the cost of making the biodiesel. In fact, these goods and services may exceed the EE value of the biofuel. The diagram below shows our latest array of products and services identified for seashore mallow. Some are well researched and some are not yet examined in depth. 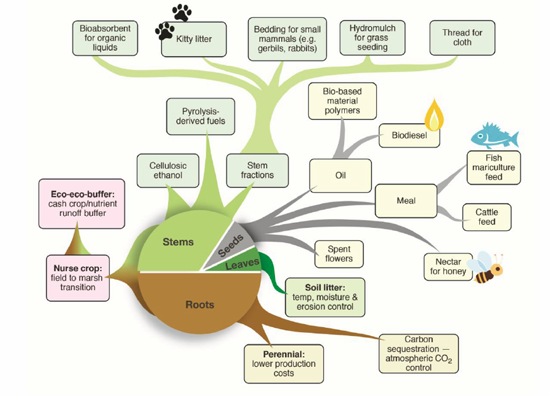 The series of bullets below gives an idea of the depth of investigation of the products and ecosystem.