Emissions of dust, gases and odors from poultry facilities pose major challenges for the poultry industry. In addition to environmental issues associated with air and water quality, nuisance complaints associated with alterations in the ventilations system and urban encroachment are becoming a greater concern. Costeffective technologies to reduce these emissions from modern tunnel-ventilated poultry houses are limited.  In late 1999 a University of Delaware-led initiative, in cooperation with the local poultry industry and various state agencies began an initiative of planting trees and shrubs around poultry farms. The goals of these vegetative environmental buffers (VEB) were to address environmental, neighbor-relations and production concerns (Figure 1). With support from US EPA, Region 3, Section 319 funds, a study was implemented to measure potential efficacy of VEB to capture emissions from a tunnel-ventilated poultry house. 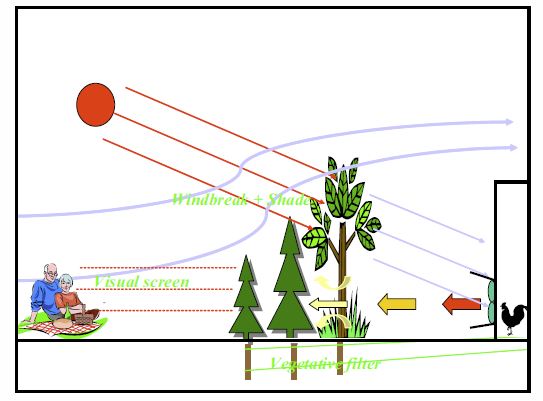 In the Spring, 2002 a 30 foot wide, three row planting of 16 foot tall bald cypress (30 ft from fans), 14 foot directly opposite of two 48 inch tunnel cone fans on the northeast side of a house growing roaster chickens (Figure 2). Total depth (front to rear) of this planting was approximately 22 ft. Spacing between trees allowed the branches to touch, thus maximizing vegetative density. The goal of the planting design was to use the bald cypress as a pre-filter to catch large  articulates and feathers, and to slow the air emitted from the fans. The Leyland cypress and Eastern red cedar provided maximum vegetative density to filter emissions. The reason for planting a deciduous tree on the inner row was to capture (and sometimes accumulate) large particulates during warm weather operation of the tunnel fans. These trees will then drop their leaves, with the attached particulates, in cold weather when tunnel fans are seldom operating. 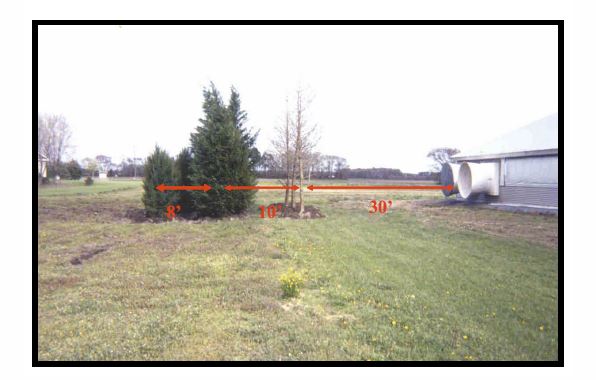 Air sample measurements included wind speed, total and respirable dust, ammonia and odor. General weather conditions (air temperature, wind speed and direction) were documented at the site during air sampling events. Data was collected during three-day periods prior to broiler movement (approximately 5- 6 weeks of age) and again before roaster movement (7-8 weeks of age). To assure that sampling occurred only when tunnel fans were operating, all samples were collected from warm weather flocks during a five hour period from approximately 11:00 am to approximately 4:00 pm. Air sampling was conducted over four summers (2002-2005). To minimize the impact of crosswinds on the exhaust plume, a combination of temporary and permanent wing-walls were installed from the house to the edge of VEB during sampling events (Figure 3). 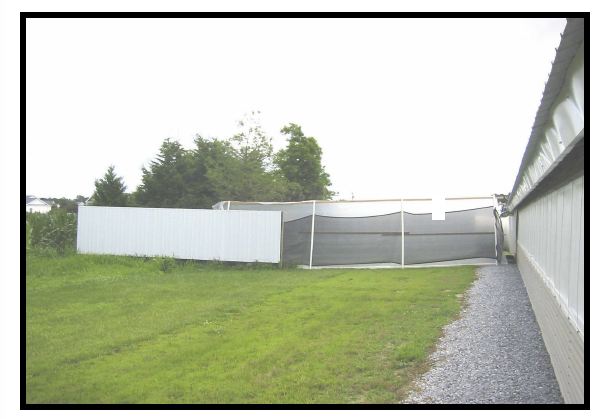 Total and respirable gravimetric dust concentrations were determined using NIOSH Methods 0500 and 0600, respectively. Flow rates of the pumps were calibrated at 2 L/min for measuring total dust concentration and 1.7 L/min for  espirable dust concentrations. Pump flow rates were calibrated with a rotameter prior to and at the end of each sampling event. Sampling time averaged approximately five hours during tunnel fan operation. Both blank and background samples were obtained for each sampling event. The pre-weighed cassettes were supplied and analyzed by a certified laboratory (Data Chem Laboratories, 875 Workshop on Agricultural Air Quality Inc., Salt Lake City, UT). A Dust Trak Model 8520 (TSI Inc., St. Paul, MN) was used during 2004 as an additional procedure for total dust determination. These units provide the added advantage of getting realtime analysis during the 5-hour sampling events.

The primary method used to measure ammonia gas in this study was Gastec No. 3DL tubes (Gastec Corp.,Ayase-City, Japan). Since ammonia concentrations exceeded the exposure limit of these 10 ppm tubes during our 5-hour sample period, multiple tubes were used during each sampling event. Sorbent tubes using NIOSH method S347 were also tried in 2002. Due to low ammonia concentrations in back of the VEB and the short 5-hour sample cycle, nearly one-half of the reported values were below the laboratory’s (Galson Laboratory, East Syracuse, NY) detection limits. This method was discontinued. The impinger method OSHA ID -164 is a recognized procedure for ammonia determination. This method gave unexplained wide deviations in results and was also discontinued. It is important to stress that this study was a determination of the relative differences in emission concentrations between the front and rear of the VEB and consistency of results were most important.

For odor determination, an air sample was drawn into a 10 L Tedlar® bag at two locations; one in front and one behind the VEB. These samples were shipped overnight to The Iowa State Olfactometry and Air Quality Laboratory (Ames, IA) and were analyzed Within 24 hours after collection.

Over the past four years the growth (height) of the bald cypress, Leyland cypress and Eastern red cedar has increased 13, 24 and 25% per year, respectively. Dust and feather accumulation on the vegetation has been the greatest on the lower canopy of the Leyland cypress. This material continues to accumulate and is being retained over winter months, which may eventually affect health of these trees. To avoid this potential concern, a deciduous tree in the first row having greater density at the lower canopy, an alternative to the Leyland cypress that does not accumulate particulates and a greater planting distance from the fans, may be necessary. The current recommendation is to plant VEB at a minimum distance of 10 times the fan diameter (i.e. 4-foot diameter fan x 10 = 40 ft planting distance).

In this report the efficacy of VEB to abate emissions is expressed as the relative change (percentage) in concentrations from the front to the rear of this planting. Although potential dispersion losses across the width of the vegetation could not be measured with this experimental design, subsequent experiments suggest they are minimal. Because respirable dust concentrations were often below detection limits in the rear of the VEB these measurements were discontinued after the first year of the study. Based on 33 days of sampling over a four year period, the VEB reduced total dust by 49 ± 27% (P<0.01). Variation in efficacy of VEB to capture dust can be partially explained by wind direction during sampling events.

Winds from the rear of VEB toward fans “increased” efficacy while opposite direction winds “decreased” efficacy. The wing-walls minimized the influence of crosswinds on measurement accuracy during sampling events. Background dust samples collected 300 ft away from the houses in a non-exhaust area were 94% less than concentrations entering the VEB. During 2004 both gravimetric and the Dust Trac determination procedures were used simultaneously during some sampling events and yielded similar results in relative efficacy; 35 vs. 39%, respectively. Air velocity from the fans was reduced 99% by the VEB.

Ammonia concentrations from 29 days of sampling suggest VEB reduced the concentrations by 46% (P<0.01). The standard deviation was +/- 31% and, again, can be partially explained by wind direction during sampling events. In 2005 both ammonia and dust reductions by VEB were greater at 8 ft compared to 4 ft height and may be explained by greater vegetative density in the higher canopy. Background ammonia concentrations were 93% less than samples obtained on the fan-side of the VEB. The fate of ammonia and nutrients in dust that accumulate on the vegetative filters is under investigation.

A more limited sampling of odor (n=13) found a non-significant reduction (6%) in odor concentrations and greater variability (standard deviation +/- 45%). Meteorological conditions and the type of crop next to VEB appeared to influence the efficacy of VEB to reduce odor. Wind direction appeared to have a greater influence on odor reduction by VEB than either dust or ammonia. Furthermore, when the field to the rear of VEB was in corn (crop within 4 ft) there may be a zone of stagnation coupled with wet, humid weather during some sampling events contributing to lack of efficacy of VEB to reduce odors. It is speculated that having openness behind these plantings may be a consideration to enhance VEB role in odor reduction.

The results and concept of using VEB as a cost-effective technology to abate emissions from modern tunnel ventilated poultry houses are encouraging. However, adoption of this practice by the Delmarva poultry industry has been driven primarily by its neighbor-relations benefits. The visual screen aspect of a VEB coupled with a proactive measure to address increasing urban encroachment issues are driving forces in acceptance of this technology.