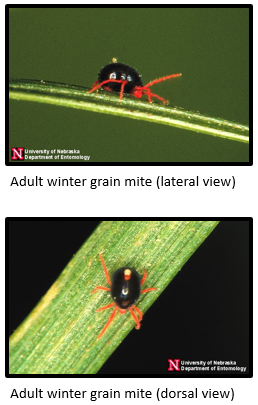 The winter grain mite (WGM), as its name implies, is a cool season pest of small grains and orchard grass. The adult mite is approximately 1 mm long with a dark brown to black body, reddish-orange legs, and it has a reddish-orange spot on the top side of the body. Immature mites are 0.18 mm long and initially reddish-orange in color becoming dark brown with orange legs as they move through the immature stages. It is active from mid-fall to late spring; however, temperatures between 400 and 750 favor WGM development.

There are two generations a year. The first generation emerges in October from over-summering eggs (kidney shaped, and reddish-orange to yellow in color) laid the previous spring.  First generation populations peak in December and January.   The second generation develops from eggs laid by the first generation, and populations peak in March and April. Females deposit approximately 30 eggs and do not require a male for fertilization. Unfertilized eggs produce more females. Eggs are laid either singly or in clusters on leaf sheaths and stems or at the base of plants within the soil. The WGM has six developmental stages: egg, prelarva, larva, protonymph, deutonymph, and adult. On average, development time from egg to the death of the adult is 98 days.

Adult and immature mites feed on the plant chlorophyll of small grains, giving the plant a silver or frosted appearance. Severe feeding may result in dead or stunted plants, and it has the potential to significantly reduce yield. Young plants are more susceptible to the feeding damage than older, more robust plants. Plants that are either drought stressed or nutrient deficient also exhibit more severe feeding damage than unstressed plants.

Fields should be scouted in October and early November and again in late winter to determine if mites are present and to estimate population densities. The most effective scouting method is to use a 10X hand lens, checking both plant foliage and crop residue on the soil surface for the presence of immature and adult mites. A sweep net may also be effective in determining if mites are present. The best time to scout is early in the morning and at dusk on calm days because the mites will seek refuge during the day in the top 4 or 5 inches of the soil profile to avoid the sunlight. On cool, overcast days, they may be observed actively feeding on plant foliage throughout the day.

There are no economic thresholds that have been developed for WGM in small grain fields. However, as a general rule of thumb, if plants exhibit symptoms of damage and several mites per plant are found, a chemical control may be necessary to prevent or reduce yield loss. If populations are small and the plants show no feeding injury or if populations and damage symptoms are isolated, the field should be scouted more frequently to insure yield losses are kept at a minimum.

In recent years, we have observed an increase in economic damage from WGM feeding in small grain fields planted no-till into corn stubble. Therefore, one effective management option is the use of tillage to reduce the residue and overwintering habitat. Crop rotation can also be effective in reducing winter grain mite populations within a field. Mite populations have a tendency to build over time because each year a field is planted in small grains, the number of eggs that over-summer increases. Rotating a field out of small grain can disrupt this cycle by removing a suitable host to support future generations. However, crop rotation does not completely eliminate the risk that a field may reach economic levels of mites because there is always a possibility that they may move into a field from adjacent fields and from other suitable host plants found around the perimeter of the field.

When plants are showing symptoms of feeding damage and several WGM can be found per plant, a foliar application of an insecticide can be effective in reducing winter grain mite populations. Although no insecticides are labeled specifically for winter grain mites, Warrior II, that is labeled for mite suppression in wheat and barley, as well as dimethoate labeled for brown mite control (wheat only) have provided suppression of WGM populations. Be sure to read the label for use rates and restrictions.