Stalk rots are one of the most significant set of diseases on corn.  These diseases are insidious, and often growers are unaware of their effects until harvest.  Low levels of stalk rot occur in nearly every corn field in Delaware, and severity and incidence varies from year to year.  Stalk rots can cause breakage and lodging of stalks and plant death.  In many cases the internal tissues of the stalk, or pith is compromised.  This publication will discuss general symptoms of these diseases, identification of stalk rotting pathogens, factors that increase stalk rots, management, and scouting recommendations.

Initial symptoms of stalk rots are noticed by premature wilting and ear drop (Figure 1).  As the disease progresses stalks senesce rapidly and turn brown to gray. 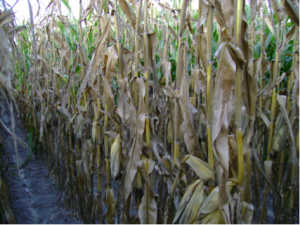 Figure 1. Symptoms of stalk rots in corn include premature wilt and ear drop.

Stalk rot pathogens decay the central pith, which weakens the stalk.  One can envision a healthy stalk being a solid rod of plant tissue.  A rotted stalk is no more than a tube with decaying pith loosely packed inside.  Thus, corn suffering from stalk rot will easily lodge, or bend when exposed to windy conditions common in Delaware (Figure 2).  In addition, plants suffering from stalk rot have rotted roots, which also favors lodging.

There are a few common stalk rots in Delaware.  Characteristics of these stalk rots are listed below (Table 1).

Carbohydrate stress in corn can be caused by either a) limits to photosynthesis or b) overcommitment of carbohydrate resources to the ear.  The following are generalizations.  For more detailed information refer to agronomy texts or primary literature.

Photosynthetic limitation can be caused by numerous factors.  The most important factors impacting stalk rots in corn are foliar diseases, insect damage, cloud cover, high plant density, and nutrient and water deficiencies.  Disease and insect damage reduce the amount of photosynthetic area, thereby reducing the overall carbon budget.  As levels of damage to foliage by pathogens and pests increase, so too does the amount of stalk rot.  Cloud cover and high planting density reduce the amount of light accessible to foliage and therefore photosynthetic rate.  High planting densities also can limit access to water and nutrients, which reduce photosynthetic rate through other mechanisms. 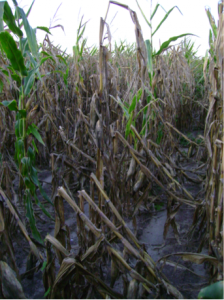 Hybrid characteristics such as a large cob size and high kernel numbers may predispose plants to stalk rots.  This is because the aforementioned factors increase the amount of “pull” the cob has on the plant carbon budget.  Imagine you are sharing a milkshake with a friend.  The harder your friend drinks, the less milkshake you have to enjoy.  Something similar occurs in plants with carbohydrates.  After flowering the carbohydrates, produced through photosynthesis in the ear leaf, are preferentially diverted to the ear.  However, if the ear leaf cannot meet the demands of grain fill, carbohydrates are mobilized from the root and stalk.  Without a sufficient carbohydrate supply the production of chemicals for defense of plant tissues is reduced, resulting in increased levels of infection by stalk rotting pathogens.  For this reason many of the stalk-rotting pathogens are opportunistic, and disease is caused by whatever organism happens to be in the vicinity when carbohydrate stress occurs.

Limited access to nutrients critical to photosynthesis can cause carbohydrate stress and increase stalk rots.  Although there is variability in terms of specific nutrients and diseases, in general, stalk rots increase when nutrients are lost during the growing season.  Conversely, over fertilization can cause excessively lush growth.  Lush growth is often structurally weak and easily invaded by fungi.

Limitations to water impact the amount of gaseous carbon that moves to the foliage from the atmosphere.  Plants contain tiny openings in the foliage and stems that allow gas exchange.  When water is plentiful, these openings open.  When water is deficient, these openings close, which limits the amount of carbon that enters the plant leaf and therefore the amount of carbohydrates available for grain fill, plant defense, etc.  Therefore, any factor that limits the ability of the plant to access water may ultimately predispose the plant to stalk rot.  Excessively wet conditions can leach nitrogen from the soil and stress roots, facilitating fungal infection.

Hybrids differ in their susceptibility to stalk rots.  In general, hybrids with low ratings of stalk strength or those that produce exceptionally large ears tend to be more prone to stalk rots than those with strong stalks and smaller ears.  Hybrids also can differ in their water and nutrient use profiles, which as mentioned previously, impact the carbon budget of the plant.

Management of stalk rots should include the use of: 1) hybrids with resistance to stalk rot pathogens and/or high ratings of stalk strength and stay green characteristics; 2) a balanced fertility program based on the environment, population, and hybrid; 3) programs to control foliar diseases and insects; 4) irrigation to avoid drought stress.

Scouting is crucial for minimizing losses caused by stalk rots.  Fields can be scouted for stalk rot before harvest by scouting 1 site for every acre of the field.  At each site pinch the base of ten plants to assess stalk integrity.  Plants that can be pinched easily between the thumb and index finger are likely suffering from stalk rot.  Alternatively, push plants 30-40 degrees from vertical.  Plants suffering from stalk rot will fall over easily.  If more than 10-15% of tested plants in a field show lodging potential schedule that field for early harvest.