Oak wilt is a serious, fatal disease of oak trees, caused by the fungus Bretziella fagacearum, formerly Ceratocystis fagacearum. It was first detected in Wisconsin in 1944 and has spread eastward in the U.S. The fungus blocks the water conducting vessels of the trees and symptoms include leaf yellowing and browning, wilt, and dieback of branches. Reddish brown discoloration called flagging may occur well before normal fall color. The fungus is spread between trees by small beetles or root grafts, and can be spread by the movement of firewood. Oak wilt affects red oak and pin oak, which have been widely planted in residential neighborhoods in the mid-Atlantic region.

Symptoms include pale green to brown marginal discoloration of leaves that usually appears in mid-summer, lacking the yellow band associated with bacterial leaf scorch. Symptoms are similar to those due to drought or root issues that interfere with flow of water in trees. Trees will not recover. Once symptoms are observed, leaves drop, and trees die rapidly, often within six to eight weeks.

Oak wilt has not been reported to date in Delaware. The host range of Bretziella fagacearum includes oaks in the red oak group such as northern red oak, scarlet oak, pin oak, and black oak. Symptoms on red oak are wilt and browning beginning from the leaf margins and progressing inward. Symptoms do not follow the veins. However, symptoms on live oak include yellowing along the veins that turns brown, a symptom called veinal necrosis. White oak is not as susceptible, but can be infected. 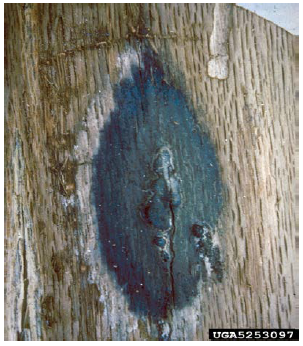 Diagnosis can be aided by the observation of vascular discoloration in branches and fungal mats under the bark of red oak. Fungal mats are mycelial growth with spores produced in areas under the bark. There may be an odor of rotting fruit associated with cracks in the bark and the fungal mats can be seen if bark is chipped away. Confirmation of diagnosis is based on laboratory detection of the fungus in plant tissue. Branches collected in the summer or from bark taken near the base of trees provide the most accurate chance of culturing the fungus. A positive detection of the fungus along with branch and crown dieback indicates that the tree will not recover. Severely affected trees should be removed to reduce the spread to nearby oak trees.

Maintain good tree vigor and reduce plant stress by following good cultural practices including proper planting, watering during times of drought, mulching, and care to avoid wounding. Once infected, treatment with injectable fungicides is expensive and not very effective. Spread of disease can be minimized by mixing species of trees in residential plantings to avoid monoculture. Suspect samples of recently wilted branches should be submitted to the UD Plant Diagnostic Clinic or Delaware Department of Ag.

Reference to commercial products does not imply endorsement by University of Delaware
Cooperative Extension.