Mulberry Weed or hairy crabweed (Fatoua villosa) (Thunberg) Nakai is an invasive exotic Asian species from the Mulberry family (Moraceae).  First reported in Louisiana in 1964 by J.W. Thieret but present years earlier, it has since spread to much of the Eastern United States, appearing throughout the Southern states and as far north as Michigan and Delaware. In Delaware, it was detected in 2013.  It is also present on the West Coast, with documented occurrences in Washington and California.  Appearing much like a nettle (Urticaceae), it is an herbaceous erect annual. It is characterized by papery, heart-shaped, alternate leaves. The plant has densely pubescent (hairy) stems. The flowers are dense, light green cymes (clusters) with no true petals, and seeds that are forcibly expelled. It flowers in the mid-summer and fall.

Much of the spread of Fatoua villosa can be attributed to its presence in horticultural material and nursery stock.  It is also likely to spread through purchased top soil that contains its abundantly produced and explosively projected seeds.  It favors disturbed areas and is an especially problematic weed in agricultural fields, greenhouses and gardens.

Mulberry weed should be removed from garden beds or pots and discarded in the trash, not composted nearby.  The plant produces an abundant numbers of seeds, so it should be treated with herbicide or rogued out before it sets seed.  A two to three inch layer of mulch can prevent most seed germination, as can pre-emergent herbicides.  Post-emergent herbicides would also be effective.

Reference to commercial products or trade names does not imply endorsement by University of Delaware Cooperative Extension. 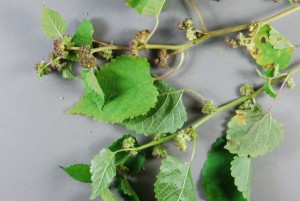 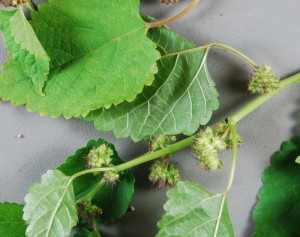