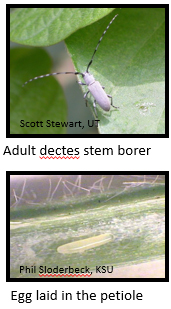 The Dectes stem borer (DSB) adult is a long horned beetle, 3/8 inch long, grey, and with long antennae that are banded black and grey. The legless larvae reach ½ to 5/8 inch long, are creamy white or yellow in color, and have an “accordion-like” appearance. The DSB is a known pest of soybeans and sunflowers. In addition, it has a number of native host plants including giant ragweed and cocklebur. The adult beetles begin emerging in late June and are present in soybean fields until mid-August, laying eggs in the petioles and stems of soybean plants.

The females lay a single egg into the pith tissue of a soybean plant by chewing a hole through the plant’s epidermis and inserting her ovipositor directly into the plant. If an egg is laid into the stem of a leaf petiole, the petiole will wilt and drop from the plant when the larva hatches and tunnels into the main stem. Typically, there is also a reddish scar where the petiole dropped from the plant.

Once the egg hatches, the larva tunnels up and down the inside of the soybean plant, feeding on the pith tissue. As the plants begin to senesce, as early as late September, the larva creates a chamber in preparation for overwintering by girdling the inside of the host plant several inches above the soil surface and depositing a frass plug immediately below the girdled area of the stem. The DSB overwinters in the larval form in the chamber it created either at or just below the soil surface. Pupation occurs in early summer, completing the life cycle.

Currently, there is not an established threshold for DSB adults in soybeans. Sweep net sampling can be used from late June through mid-August to identify fields that have infestations of DSB adults. Plants can also be visually inspected for oviposition scars: use wilted petioles or reddish scars where the petiole dropped from the plant to identify fields with potential larval infestations.

To confirm that a plant is infested with a DSB larva and assess the risk for lodging loss, it should be cut lengthwise with a pocket knife, looking for the larva and or feeding damage by mid-September. Knowing if a field is infested with DSB and the severity of the infestation is important because the field may be prone to lodging and should be harvested in a timely manner to reduce the risk for lodging losses. 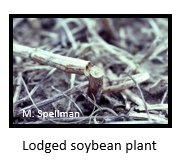 Although cultural control practices will not provide 100% control, research results from Delaware and other regions have indicated that with the adoption of a combination of the following cultural control strategies, the risk of yield loss from the DSB can be reduced.