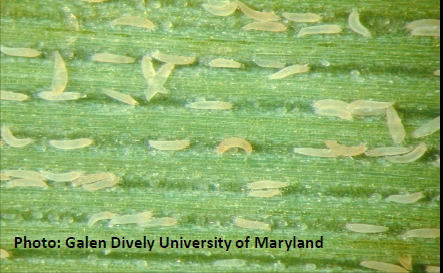 Cereal rust mite adults are small measuring less than one millimeter (mm), and for the first time observer a 10-20X hand lens is needed to see them. The mites are cigar-shaped and roughly twice as long as they are wide. Adult mites are often light yellow but can be white or orange in color.

Mites typically overwinter in the lower portion of the host plant in both the adult and the egg stages. Eggs are extremely small and are deposited in the leaf vein grooves. Once hatched, immature mites reach maturity very rapidly with several generations possible before first-cutting. Eggs typically begin hatching in March with adult populations peaking in late March to early April. Adult mites often migrate to the lower portion of the plant to feed on the youngest tissue. Although mites are present for the entire growing season, activity often decreases after first cutting as temperatures begin to rise. Unlike other pest mite species, this mite prefers cooler temperatures and tends to be less active during warmer summer months.

The primary damage from cereal rust mite infestations comes from direct feeding. Like other piercing insects, mite feeding damages specific cells called bulliform cells. These cells play an important role in how a plant responds to drought stress, and they are responsible for the characteristic rolling of plant leaves in response to moisture stress. Timothy infested with cereal rust mites will often appear to be under drought stress even if adequate moisture is available for plant growth. Other symptoms of cereal rust mite damage include stunted growth and discoloration.

Juvenile populations typically begin to build in March. In general, fields should be checked for mites before spring green up. During this time, fields should be scouted, looking for eggs and for juvenile mites. Cereal rust mite eggs and larvae are very difficult to see with the naked eye so a 20X hand lens is recommended. Although there is no approved scouting procedure, several random plants should be selected from different locations in the field since mites are generally distributed throughout fields. Look for curled leaf blades and inspect each leaf blade paying particular attention to the areas in between the leaf veins. Since mites migrate primarily by wind movement, repeated trips to each field are recommended before first cutting. In general, mites are usually highest on the basal sections of the top two leaf blades.

There are no established economic thresholds for this pest. Treatment is recommended, however, in fields with a previous history of cereal rust mites and/or when 25% of the plant tillers exhibit curled tips on the new leaf blades within several weeks following green-up.

The only approved and effective chemical control for cereal rust mite in grasses grown for hay is Sevin XLR Plus. Good coverage through high volumes is needed for adequate suppression of cereal rust mites in timothy. Since mites are typically found in the grooves between the leaf veins, water volumes of at least 20-25 gallons per acre should be used. (NOTE- the label is the law. Be sure to read the label before making any pesticide applications and observe all label restrictions).

Skoracka A. and Kuczynski L. 2004 Demography of the cereal rust mite Abacarushystrix(Acari: Eriohyoidea) on quack grass. Experimental and Applied Acarology. 32: 231-242.