Larva - brown head and legs with a yellow body often covered with brown or black mucus and feces giving them a shiny appearance (fig. 3)

Overwintering adults emerge in mid-March and begin to lay eggs after 2 to 3 weeks of feeding. Since females prefer to lay eggs on young plants, spring-planted oats and late-planted wheat are the predominant hosts. In general, barley is more advanced in the spring and less attractive to egg -laying adults. Newly emerged larvae will feed voraciously for 10 days up to 3 weeks. Larvae cover themselves with a brown or black coating of fecal material causing them to appear "slug-like". Summer adults emerge during late June and early July, feed on corn and wild grasses, then enter a summer dormancy. Only one generation occurs per year.

Both adults and larvae feed on the upper leaf surfaces of wheat, barley, and oats. Adults feed between the leaf veins, resulting in longitudinal streaks on the leaves (fig. 4). Larvae feed on the outer surface of the leaves, giving the plants a silver or "frosted" appearance (fig. 5 and fig. 6). 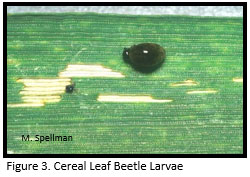 Begin sampling fields in late March to early April as soon as adult beetles are observed. Examine 5-10 tillers (entire stems) in at least 10 locations throughout a field. Count the number of eggs and larvae per stem and estimate the percent defoliation. If only eggs are found, the field should be re-sampled at a later date when eggs have hatched and larvae are detected.  The treatment threshold is 25 eggs and/or larvae per 100 tillers. Treatment is suggested when the egg threshold is reached and more than 50% of the sample consists of larvae, i.e. 50% egg hatch.  Research indicates that the greatest damage can occur between the flowering and the soft dough stage. Once the wheat reaches the hard- dough stage, the beetle has little effect on yield. A number of introduced parasites have been used to keep populations below an economic level. Planting wheat immediately after the "Hessian Fly-Free Dates" has also helped to suppress populations.

NOTE – The label is the law. Be sure to read the label before making any pesticide applications and observe all label restrictions.