The fungus Calonectria pseudonaviculata (Cylindrocladium pseudonaviculatum) causes severe defoliation and death of container grown boxwoods, and dieback in in-ground plantings. Most boxwood species are susceptible, including American and English boxwood (Buxus sempervirens), little leaf boxwood (B. microphylla) and hybrids such as B. sinica. Pachysandra is a host, and can be a source of spores capable of causing new infections. Sweetbox (Sarcococca) has also been identified as a host. There are a number of other diseases that affect boxwood, and environmental stress plays a role in susceptibility and predisposition to disease. Timely and accurate identification by microscopy is important for management of this aggressive disease.

Cylindrocladium is favored by temperatures between 18 and 25 C and by high humidity and rainfall. Early symptoms include brown leaf spots or tip blight, which can be rather inconspicuous. Twigs and stems later develop black streaks and leaves drop. In humid weather conditions or after incubation of samples in a moist chamber, signs of the fungal pathogen may be seen with a hand lens or a microscope. Signs include white clusters of spores of the fungus. It is very important to have this disease accurately identified due to similarity with other diseases, especially Volutella blight, which has been common in Delaware for many years. Volutella blight is most often associated with boxwood plants under environmental stress, whereas Cylindrocladium can affect healthy plants.

Spore masses of Volutella are pink to orange in color. There is no good control for Volutella except to trim out and reduce stress on plants. Boxwood blight, however, can be severe and lead to death of infected plants, and requires control measures.

Management and Control of Boxwood Blight 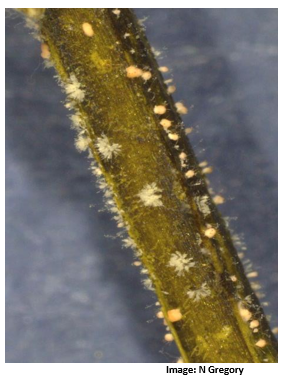 Control is dependent on rapid and accurate diagnosis. Diseased plants should be removed and destroyed if in a retail or nursery situation. Boxwood within 10 feet of affected plants should also be removed. Make sure to clean up all debris and leaves, as sanitation is very important to remove plant material containing spores. The pathogen can survive as resistant microsclerotia for several years in soil and debris, so infected material should not be composted. Following removal of affected material, pruning and sanitation of remaining area, fungicides can be used to protect new growth and unaffected plants nearby. Pruners and tools should be cleaned with bleach or alcohol. Avoid overhead irrigation. Do not bring new boxwood into established landscape plantings without inspection.

Check with your state Department of Ag or County Agent regarding labeled fungicides. Preventive applications are helpful on asymptomatic plants or on plants near confirmed cases. Fungicide spray coverage needs to be very thorough due to the dense canopy of boxwood plants. It is recommended that plants be pruned first and then sprayed with the high rate of chemical according to label. There are no effective curative treatments. Use of mixtures of multiple active ingredients and rotation of chemistries to avoid development of resistance. A spreader/sticker is suggested. Chlorothalonil is a good protectant product to use. Some spray program options include:

Reference to commercial products or trade names does not imply endorsement by University of Delaware Cooperative Extension.