Artillery Fungus and Other Things That Grow in Mulch

Landscape mulch usually consists of hardwood shreds or bark chips, providing cover to hold moisture and add a finished look. Wood in mulch also provides a food source for fungi that are natural decomposers, breaking down plant material and utilizing organic matter. Without fungi, dead leaves, twigs and branches would clutter forests and landscapes. We see fungal fruiting bodies after growth of threadlike mycelium in soil and mulch. The most recognizable of these spore producing bodies are mushrooms, but sometimes they produce other structures, such as:

A common surface mold is slime mold (ex. Physarum sp.) that will rapidly grow over the surface of mulched areas, characterized by a yellow, orange, or white, soft gooey mass. They are harmless, and can be raked away. Undisturbed, they will produce spores and then dry up, but may grow again after rain events. 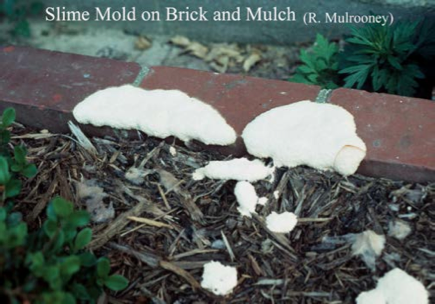 Stinkhorns (ex. Mutinus sp.) are common, characterized by an upright tube like structure that may reach 6 to 7 inches in height overnight. Stinkhorns have a slimy, smelly cap on which spores are produced. The smell attracts insects to the cap where they pick up spores and carry them to new locations. Stinkhorns are harmless and may be broken up by raking lightly over mulch. 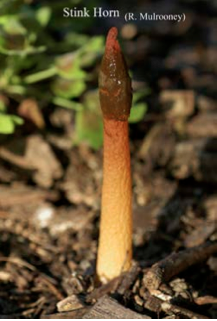 Bird’s nest fungi (ex. Cyathus sp.) produce small (1/4 inch or smaller) cup-shaped fruiting bodies on top of mulch, usually in clusters. Cups have very small round spore bodies (peridioles) in the bottom, which look like miniature eggs in a bird nest. Spore bodies (eggs) are splashed out of cups during rains, or moved around by animals or man, spreading spores of the fungus. Bird’s nest fungi are harmless, and raking prevents growth and movement of spores.

The artillery fungus, Sphaerobolus spp. may become problematic in mulch, due to the production and release of spores. This fungus produces very small, inconspicuous cup shaped fruiting bodies (about 1/10 of an inch) that contain a dark round spore body (peridiole). Accumulation of water and nutrients in the fruiting body eventually leads to a pressure release of the spore which is shot toward any light source up to a distance of several feet. Spores land on light colored siding, building foundations, or cars. Spots can be very unsightly and spore bodies have a sticky substance on them which can make removal extremely difficult. Soap and water with a scrub brush can be effective before material dries. Growth of artillery fungus is favored by hardwoods in mulch, excessive rainfall, or irrigation of foundation plantings.

Artillery fungus is problematic on north sides of buildings where shade maintains moist conditions. Use of mulch derived from dead and diseased trees should be avoided. Use of bark mulch or pine bark nuggets rather than hardwood provides a less favorable substrate. Addition of fresh mulch yearly can suppress fungi, but plantings should not be mulched too deep. Removal or raking of infested mulch to disturb growth of fungi may help. Research (D. Davis, PSU) indicates fresh mushroom compost blended with landscape mulch, at the rate of ≥40%, can be effective in reducing or suppressing artillery fungus, a good strategy in sites that have had artillery fungus. Addition of fresh mushroom compost adds organic matter, a rich dark color, and beneficial microbes that may compete with the artillery fungus.

Disclaimer: Reference to commercial products or trade names does not imply endorsement by University of Delaware Cooperative Extension or bias against those not mentioned