Interaction with gardens and natural spaces offers a variety of mental, physical and social benefits for humans, ranging from stress reduction, quicker healing, and mitigation of Attention Deficit Disorder in children to decreasing crime and air pollution. Sustainable sites consider human energy and creativity as a renewable resource, recognizing the potential for healthy living and employment conditions. City planners, governments, and ordinary citizens are only just beginning to appreciate the tangible benefits of green spaces and take advantage of opportunities for improving quality of life in urbanized areas.

Martine Petelot, a member of small community garden on a vacant lot in a congested area of Paris, France, argues that interactions with green spaces are essential for mental well-being: “Our garden allows us to work the earth, to watch things grow,” he says. “People need to scratch about in the soil, breathe in the scent of plants and flowers, let off steam and meet other people. For many, it’s almost like therapy.” 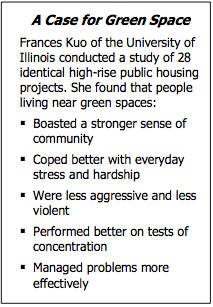 Why don’t most people realize benefits of interactions with plants?

The wealth of benefits provided by plants is not ingrained knowledge in modern day American culture. Humans often have difficulty in even seeing plants in their own environment, much less connecting plants to tangible benefits. As James Wandersee explains in “Toward a Theory of Plant Blindness,”

Only 0.0000016 of the data our eyes produce are considered consciously. It is assumed that the rest must somehow affect our thoughts feelings and actions and this means most of mental life must take place subconsciously. (2001) 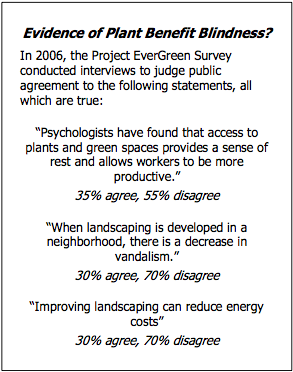 For most people, plants are a part of the subconscious sector of mental life, perceived as the backdrop, not the actors in the playing out of our everyday lives.

Plant blindness aside, it remains difficult for humans to clearly track the cause and effect between presence of plants and resulting benefits due to the cumulative nature of these benefits. Decreases in crime over time, overall improved concentration and speedier hospital recovery times are not easily recognized or quantified, and even less easily linked to surrounding landscapes. Further research and widespread education—especially of city planners and local governments—may serve as the best tool for helping us recognize the advantages of green spaces.

Due to widespread plant blindness, parks and other green spaces are usually considered luxuries, funded by leftover monies after buildings and hardscapes have been planned and built.  However, as researcher Frances Kuo advocates, parks in cities represent a potential for a minor public investment with a huge payoff: “Parks help people take care of themselves,” she asserts, “so cities don’t have to spend as much on social, medical and safety services trying to fix their problems.”

In other words, as Henry David Thoreau claims, a remedy we can never have enough of is a healthy dose of nature.

Last Child in the Woods: Saving Our Children from Nature-Deficit Disorder by Richard Louv (Algonquin Books of Chapel Hill, 2005)

“Toward a Theory of Plant Blindness” by James Wandersee

“Trees are Worth Downtown’s Investment” by Kathleen Wolf