The end-of-season corn stalk nitrate test is a simple, inexpensive tool that can be used to assess the nitrogen (N) status of a corn crop at the end of the growing season. Studies in Delaware, and other states, have shown that corn producers can use this test to improve their N management programs on a site-specific basis (Binford et al., 1990; Sims et al., 1995). This fact sheet describes the principles and practices involved in corn stalk nitrate testing test and how results should be interpreted in Delaware.

Corn plants that do not have an adequate supply of available N in the soil translocate N from stalks and leaves to the grain during the grain-filling period. Under conditions of extreme N-deficiency this translocation of N results in pale, or “yellowed” plants. However, corn plants can experience yield-reducing deficiencies of N without showing obvious visual symptoms. On the other hand, corn plants that have more N than needed to achieve maximum yields tend to accumulate N in their leaves and lower stalks. This may result in plants that appear dark green. However, visual differences between plants with adequate N and plants with excessive N usually are not apparent. Where visual differences are apparent, they are often not related to differences in grain yields.

The end-of-season corn stalk nitrate test makes use of the fact that corn plants either remove N from, or accumulate N in, the lower stalk based on soil N availability. Studies over a wide range of conditions have found remarkably similar relationships between the amount of N found in the lower stalks late in the growing seasons and the likelihood that corn had been under or over-fertilized.

Corn stalks should be sampled at least one week after black layers have formed on about 80% of the kernels of most ears. Sampling can be performed up to harvest. Areas selected for sampling should be on a uniform soil type and management history.

Collect the corn stalk samples by cutting the 8-inch segment of stalk found between 6 and 14 inches above the soil (Figure 1). Leaf sheaths should be removed from stalk samples. Severely damaged or diseased stalks should be avoided. Fifteen 8-inch segments should be collected from every 10 acres of corn and combined to form a single sample. 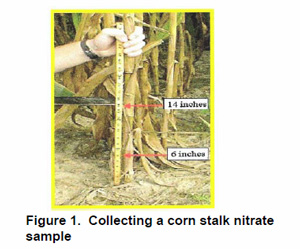 The concentration of nitrate in stalks at the end of the season is a consequence of all the factors that influenced growth during the season; not just N management. For this reason, care must be taken when interpreting the results of the stalk nitrate test. For example, any factor that limits crop yields, such as unusually wet or dry weather, may result in high concentrations of nitrate in corn stalks. The same may be true when yields are limited by deficiencies in other essential plant nutrients.

The amounts of N in corn stalks are commonly expressed as concentrations of nitrate-N in parts per million (ppm). These concentrations can be divided into four ranges (Figure 2): 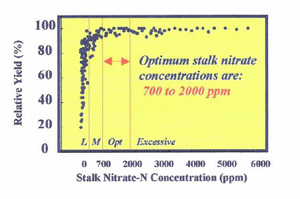 Visual signs of N deficiency are less common when nitrate concentrations are in this range. Although yields usually are not adversely affected by N deficiencies of this magnitude, this range is too close to the economic penalties associated with N deficiencies to be the target for good N management.

Optimum (700-2000 ppm) Stalk nitrate concentrations in the Optimum range indicate a high probability that the amount of soil, fertilizer, and manure N available during the growing season was sufficient to maximize profits for the producer.

Excessive (> 2000 ppm): Stalk nitrate concentrations in the Excessive range indicate a high probability that the amount of fertilizer or manure N applied was greater than necessary to maximize profits for the producer. Nitrate leaching to ground waters is a serious concern when corn stalks have nitrate concentrations in the excessive range. Nitrogen management practices used this year should be reviewed carefully and modified in the future to avoid over-fertilization with N which is uneconomic and can contribute to nonpoint source pollution of ground and surface waters.

After appropriate consideration of weather and other factors, fertilizer and manure rates should be increased on fields that usually test below the optimal range and decreased on fields that usually test in the excessive range. The test does not, at present, directly indicate how much N rates should be increased or decreased for a given stalk nitrate concentration. However, use of the test for several years will allow corn producers to identify N management practices, including rates, forms, and times of application, that tend to result in optimum amounts of plant-available N.