Determining the Presence of Glyphosate-Resistant Horseweed Under Field Conditions

Glyphosate-resistant horseweed (or marestail or Conyza canadensis) has been confirmed throughout Delaware, Maryland and New Jersey. Horseweed is a winter annual weed. Emergence begins in the fall and continues into the early summer. The plant initially grows low to the ground (rosette stage) and then develops a tall erect stem (bolting stage), from which numerous seed heads are produced. Resistant-horseweed can tolerate glyphosate treatments at all stages, even while the plant is in the rosette stage.

Glyphosate is the active ingredient in Roundup, Touchdown, Duramax, and numerous other brand names. If resistance is suspected in one of your fields, some questions should be asked to help determine if herbicide resistance is the reason for lack of control.

In trying to determine if herbicide resistant weeds are present, first eliminate other causes of herbicide failure.

Resistance develops by selecting resistant-biotypes through repeated use of the same herbicide mode of action. Some questions regarding herbicide use need to be considered:

One of the classic signs for resistance (for all situations where resistance is to a postemergence herbicide) is that only one weed species is present, all others are effectively controlled (or uniformly suppressed depending on the herbicide and weed). 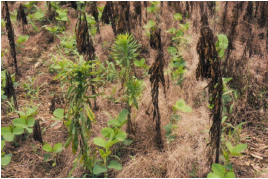 The level of resistance in the horseweed populations is not as great as seen with other herbicide resistant weeds. It is common to see some glyphosate response in the resistant horseweed. The response can be either yellowing in the growing point or death of the growing point, resulting in long branches developing from lateral buds on the lower part of the plant. Given the situation in our region, there should be some susceptible plants (controlled by glyphosate) in the same field along with resistant plants (surviving plants). This occurrence of controlled and uncontrolled plants randomly scattered throughout the field is an easy way to identify fields with resistant horseweed (see above photo). 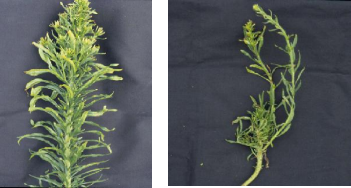 If you suspect resistance, but are still uncertain or your situation is not covered by the situations described above, there is a test you can do yourself. Mix up a small hand sprayer with 1% solution of glyphosate (2.5 tablespoons per 1 gallon of water or one-half cup per 3 gallons of water) and spray the suspected plants. Be sure to check if a nonionic surfactant is required with the form of glyphosate you are using (if needed 2.5 tablespoons per 1 gallon of water or one-half cup per 3 gallons of water). Spray approximately 30 plants in a small area. Do not “douse” the plants with the spray mixture, rather a light spray is adequate. Then spray the rest of the field with the appropriate herbicide to prevent the horseweed from producing seed. This procedure will help you determine if glyphosate-resistant horseweed is present in your field, which in turn will allow better management decisions to be made. Once a field is identified with glyphosate-resistant horseweed, glyphosate will no longer control this species and additional management will be needed for the present year and many future years.