The Bachelor of Landscape Architecture (BLA) at the University of Delaware is a professional degree program that provides undergraduate students with specific competencies for leadership within the profession of landscape architecture including the knowledge, skills and abilities required for successful practice.

The landscape architecture major at the University of Delaware evolved from the Plant and Soil Sciences (PLSC) Department’s long established and respected landscape horticulture and design program.

In April 2015, Dr. Jules Bruck convened a focus group of professional landscape architects for a one-day workshop to help establish a relevant curriculum for a new Bachelor of Science Landscape Architecture (BSLA) program. After the curriculum was developed, the program proposal was sent to the University and approved by the faculty senate in the spring of 2016.

That following September, the BSLA program, a First-Professional Degree Program, accepted its first class of 24 students and has been expanding its size and scope ever since.  In 2020, the degree was changed to a Bachelor of Landscape Architecture (BLA) and the program earned its initial six-year accreditation in December

It is the preference of the BLA program that students use a PC system, as this is the platform used to teach introductory computer-aided design and is the platform required to run most of the software used in subsequent BLA courses. Learn about computer requirements for the BLA major.

The landscape architecture faculty conduct research in a wide variety of areas. Dr. Bais's rhizosphere biology research is focused on understanding the biological significance of root exudation. Root-root, root-microbe, and root-nematode communications are continuous occurrences in the rhizosphere, but due to the underground nature of roots, these intriguing interactions have largely been overlooked. His lab research is taking a multidisciplinary approach by interfacing plant biology and chemistry to unravel the underground communication process. Dr. Balascio works in the areas of low-impact development, stormwater management, urban hydrology, and hydrologic modeling. Dr. Balascio works to manage the cycles of water, the problems caused by storm water, and the quality of water in urban areas in conservative ways that affect the ecosystems in the least intrusive fashion. Dr. Balascio also researches the assessment of problem-based student learning and teaching with technology.

Dr. Bardenhagen is an Associate Professor of Landscape Architecture who teaches "The Built Environment Studio," which is an introduction to principles involved in the design and installation of landscape elements: stone, brick, concrete, wood and metal. Dr. Barton investigates roadside vegetation management strategies that enhance the environment, are aesthetically pleasing, and economically sound. She promotes sustainable landscape practices through a variety of publications in the Plants for a Livable Delaware series, series of brochures that educates Delawareans on plants that will easily survive in Delaware’s climate, help build more healthy ecosystems, and not become invasive species.

Bruck is a registered landscape architect who created the UD Coastal Resilience Design Studio, which aims to reduce the risk of flooding on the coasts and mitigate the hazards that coastal flooding poses to coastal communities. Her scholarship includes design-based learning, creativity, and public perception of sustainable landscape practices like designing to support improved ecosystem services. She also researches and designs green infrastructure for community redevelopment and recently extended that research into coastal resilience. Physiology and ecology of turfgrass responses to abiotic stresses and the use of synthetic and natural plant growth regulators for improved stress response.

Ecology and adaptation of native grasses and forbs for pollinator meadows in the mid-Atlantic. Dr. Trammel is an urban ecologist whose lab studies how interactions with humans and the consequences of human society affect urban ecosystems’ structure and function. She investigates how collections of trees and plants that grow within cities respond to threats such as pollution and invasive species, and how these urban forests provide ecosystem services to the inhabitants of the city. A registered landscape architect with experience in urban design, community engagement, and historic and cultural landscapes. She is passionate about equitable design and is interested in historical, social and cultural influences upon the urban landscape. Other research areas include outdoor learning environments and their effectiveness, productive landscapes such as edible forest gardens, and strategies of coastal resilience. Athey is a registered landscape architect with experience in residential design, land use, and transportation planning. She teaches Indigenous Woody Plant Materials. She is especially interested in habitat design and sustainable landscapes. For the Delaware Nature Society, she coordinates the annual native plant sale, and is a member of Delaware’s Native Species Commission. Hammaker is a landscape designer working across landscape scales from residential to regional.  He teaches foundational studios and digital representation. His design interests lie at the intersection of planning, landscape architecture, and the environment – finding holistic solutions to the complexities of large-scale contemporary issues of climate change, cultural identity, socioeconomic disparity, food systems, and environmental degradation, especially in the interstitial spaces between rural and urban communities.

Farm of the Future Symposium Robinson’s passion for landscape architecture began at the University of Delaware where he was an undergraduate student in the College of Agriculture. Robinson then graduated with a master’s of landscape architecture from the University of Pennsylvania. In 1985, he joined with former graduate school classmates to establish the firm CLR Design, with offices in Philadelphia and New York City. The firm gained national prominence in bringing habitat-emersion exhibits to zoos and aquaria. During his ten years as a principal with CLR Design, Robinson pursued his personal interest in public garden planning and design, receiving design commissions from The New York Botanic Garden, The United States Botanic Garden Conservatory, Longwood Gardens, Winterthur, and Chanticleer. In 1995, he returned to Delaware to establish a practice designing both public and private gardens, including historic garden restoration, which brought such important commissions as Gibraltar Gardens and The Nemours Mansion and Gardens. In 2009, Robinson was recognized for this work when he was inducted as a Fellow of the American Society of Landscape Architects. Today, he continues to practice landscape architecture under the firm of Robinson Anderson Summers. Students choose many different pathways and interest areas. The PLSC BLA allows students the flexibility to obtain a minor and further develop their skills in the interest areas of their choice. Many students find work doing what they love – whether that is designing and planning ways to make the environment more sustainable or researching ways to preserve or conserve historic landscapes, the career options for landscape architects are plentiful. To see the many interest areas of current practitioners, visit the ASLA Professional Practice Networks website. The fellowship provides a pathway for talented undergraduates to pursue their graduate education by offering financial support to assist with the cost of tuition. As potential fellows, top UD applicants to PennDesign’s Department of Landscape Architecture will receive special consideration each year to pursue either a master’s or a dual graduate degree.

Philanthropic support for students through the comprehensive campaign, Delaware First: The Campaign for the University of Delaware, will greatly help expand resources to fully prepare and support our landscape architecture students, including through partnership with the University of Pennsylvania’s highly respected and cutting-edge landscape architecture master’s degree program.

The BLA program contributes to the community by engaging students in service learning projects.  The program seeks to expose students to the most pressing issues of our times through relevant coursework, extracurricular activities, and participation in both local and national conferences. The semi-annual student-run symposium allows students to actively network and develop relationships with practitioners while honing their leadership skills.

As students engage in active learning in studio courses and complete a required internship, they develop their capacity to creatively and successfully solve problems while advancing critical thinking, collaboration, and communication skills.

We collaborate regularly with local, state, and regional partners on conceptual designs for projects ranging from urban design, to coastal resilience, to landscape management and master planning. If you are interested in interacting with our students in a visioning or conceptual design project, we would love to hear from you. If you are interested in a Landscape Design Community Partnership, please contact Anna Wik and fill out the questionnaire.

Every other year, the landscape architecture juniors spend six months planning and executing a professional symposium.  The past two symposiums have been held at Delaware Center for Horticulture.  The programs are found below.  Here is a link to the 2019 symposium, including a list of sponsors.

Here are what some of the attendees said, "It was my first time attending and I was very impressed with the student’s work and the event as a whole.  Having a local event with such great speakers if wonderful.  It is also always great to see local colleges who I don’t get to speak to as often as I would like."

The landscape architecture students conduct research in a wide variety of areas.

The focus of this studio course is on understanding the role of site in the design of landscape architectural spaces. The studio investigates how landscape narratives construct meaning as students explore elements, process and forms in designed spaces. This work includes an exploration of spatial and sensory patterns and conditions found within large scale landscape sites. The semester emphasizes observation and analysis as design processes intended to deepen our understanding of these sites prompt authentic, contextualized responses.

This advanced studio focuses on the role the landscape architect can play in the creation of the just and sustainable city. The landscape architect is well positioned to make connections between the human, the natural, and the historical systems that exist in the urban context. On a macro level, the designer can analyze the city through mapping of social, ecological, and circulatory patterns. On a micro level, they can conceive of and implement dynamic green spaces, functional ecosystems, and welcoming streetscapes that provide great benefits to communities. Through the projects and material covered in this course, the student is invited to develop solutions that simultaneously mitigate some of the issues and take advantage of the opportunities that the city presents. Over the course of this semester, this studio transitions in focus from the macro to the micro scale.

This capstone design course imitates the scenario of an emerging professional landscape architect working on a design in industry or student entering graduate school. Defining what problem they would like to solve, students initiate a project. They work with community partners to define the project program and develop a design that meets the needs of the site and user. Instructors give flexibility to produce a senior project for a graduate school portfolio. Industry partners are consulted for project ideas and critiques. By the end of the course, students will have a deeper understanding of the value of creative problem solving and have an opportunity to apply concepts to an actual site.

Instructors cover stormwater quality and regulatory considerations. Students study stormwater control measures for sustainable and low-impact development in urban and suburban settings. The objectives of this course are to apply knowledge of hydraulics and hydrology for design of the key components of sustainable storm-water management systems — surface drainage, bioswales, bioretention basins and filtering and infiltration practices. 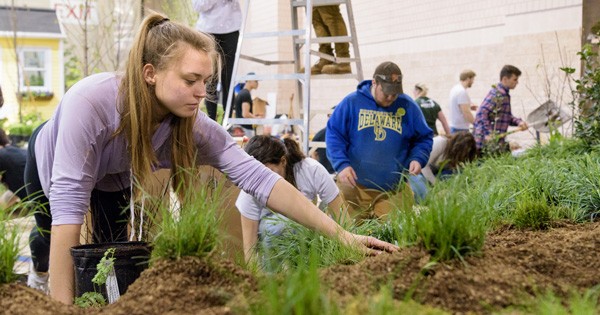 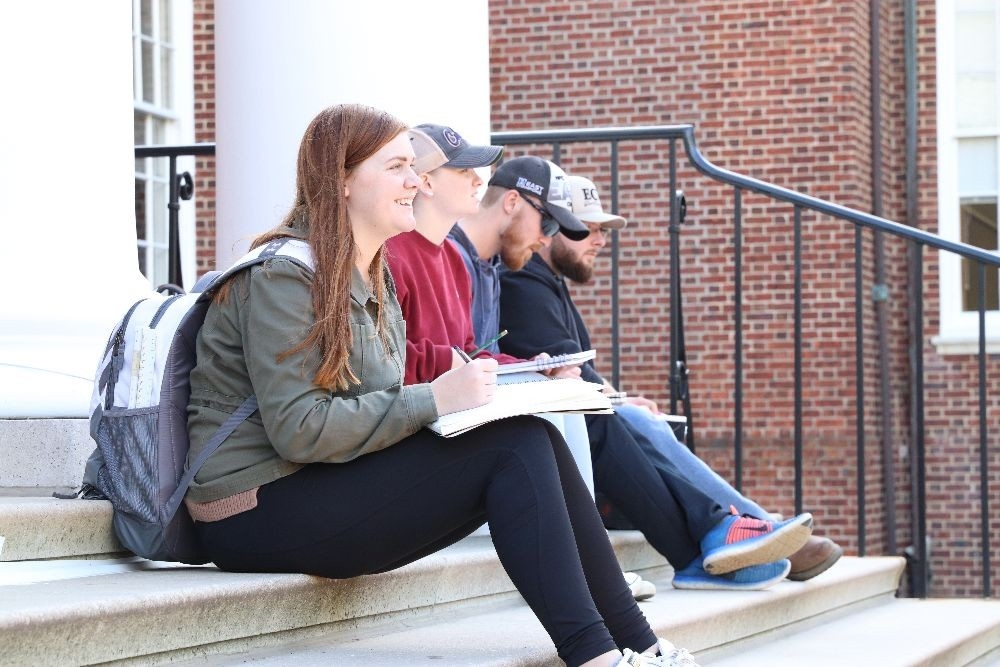 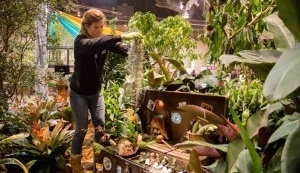