Grant Jiang and Nate Sienkiewicz (center) in cowboy hats along with other researchers and students along a legacy sediment streambank.

Haunted by the past

The forest canopy was thick, the flowing stream tranquil and the air cool and quiet. An adventurous team of University of Delaware graduate students sifted through streambank sediments underlain by mysterious layers of dark buried soils. Digging into remnants of colonial civilization in the mid-Atlantic, the student researchers were surrounded by large rocks, decomposing logs and long rusted nails as they overturned beech and maple leaves from centuries past. They sought to discover whether these age-old sediments and land use legacies impact erosion and pollution in streams and rivers today. Are we haunted by what’s left behind?

“Mill dams were built by early settlers on rivers and streams to harness water power for activities such as grinding grain, cutting lumber and forging metal,” said Shreeram Inamdar, a professor in the Department of Plant and Soil Sciences and director of the Water Science and Policy graduate program. “These structures were created every few miles and by 1840 there were more than 65,000 mill dams across 872 counties in the eastern U.S as per Walter and Merritts.”

While many of the historic dams have been breached or removed over time, the remnants are still visible at many locations. More importantly, the legacy sediments—sometimes tens of feet thick—remain in river and stream banks and continue to contribute to contemporary sediment erosion. These sediments may also contribute to nutrient pollution and leaching into the water supply, potentially undercutting conservation gains made in upland agricultural sources.

Led by Inamdar, the student research team included Alyssa Lutgen, Grant Jiang, Nate Sienkiewicz and Katie Mattern—all master’s thesis students—who each studied a specific complementary aspect of legacy sedimentation. The water science and policy graduate students, all now alumni of the College of Agriculture and Natural Resources, published their findings in four different peer-reviewed journals. Collectively, they found that while nutrient concentration is lower in legacy sediment than in agricultural soils, legacy sediment exports accounted for half of the watershed suspended sediment load in the Big Elk creek watershed. Additionally, precolonial soils are host to bacterial communities that vary considerably by location. They also found that legacy sediments could be a source or sink of phosphorus depending on the stream conditions. Finally, the team monitored the removal of legacy sediment as part of an ongoing $4.2 million floodplain restoration project and concluded that water quality improvements may take time and scientists must take overall soil health into consideration in watershed management and mitigation plans.

“This excellent research of the graduate students has not only provided important insights into a vexing problem but has also spawned new research and grants,” said Inamdar. 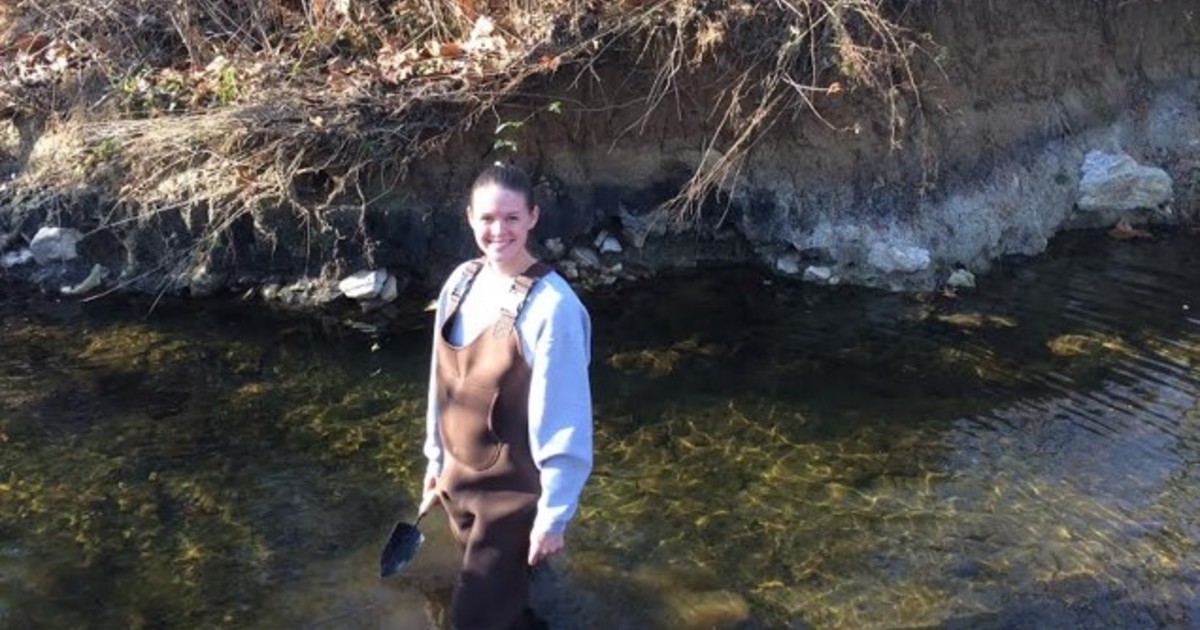 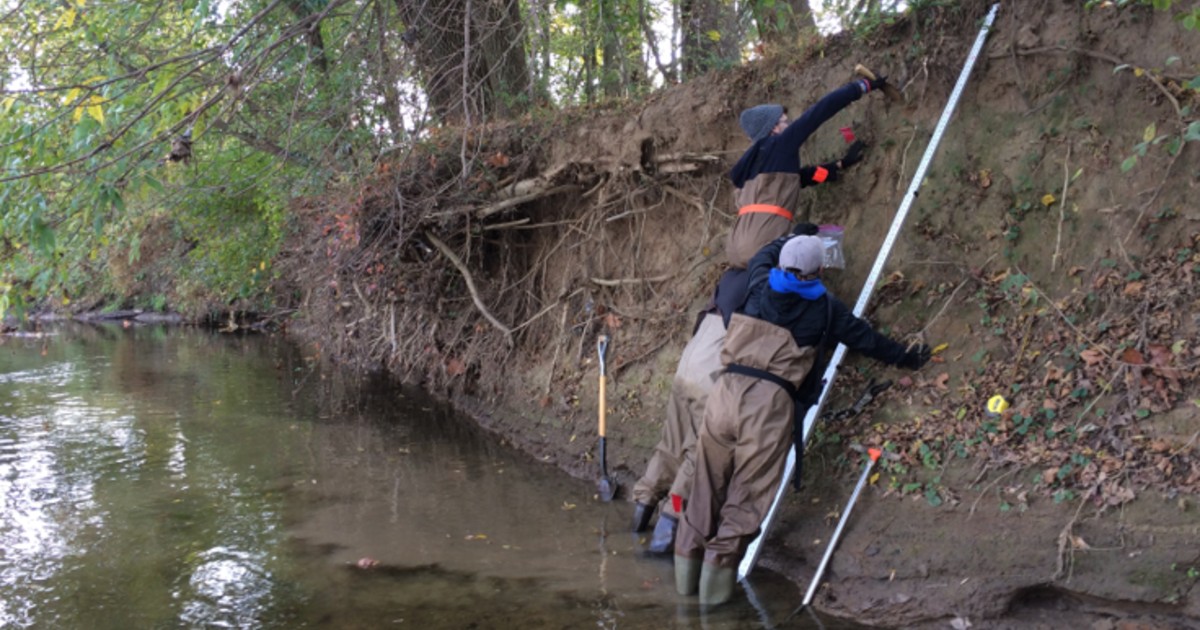 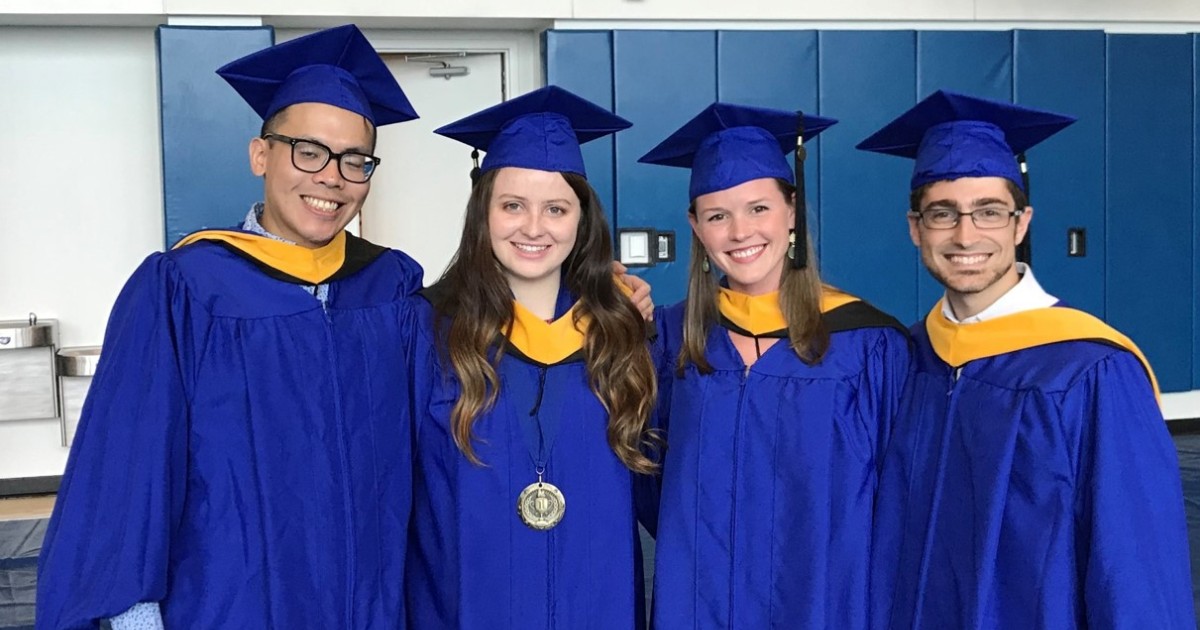 Grant Jiang (left), and Alyssa Lutgen and Nate Sienkiewicz (on the right) graduated in 2019.

Inamdar also works with colleagues at Stroud Water Research Center and the University of Rhode Island on two additional research projects, both funded by National Science Foundation (NSF) for a total of approximately $720,000, to study how existing mill dams and their removal could influence water quality and nitrogen pollution of our stream ecosystems. Water science and policy students Evan Lewis, Johanna Hripto and Melissa Sherman are assisting with this effort.

Inamdar looks forward to future expeditions to uncover the legacies of the past and their important consequences for future generations. He knows this research could help direct the future of water policy and conservation.

“A better understanding of the pollution from streambank legacy sediments will allow watershed managers to better target these sources of sediments and mitigate their pollution potential,” explained Inamdar. “Management approaches for streambank versus upland agricultural sediments are very different. Cover crops are a good solution for reducing sediment from upland agricultural fields. However, if streambank legacy sediments are an important source, practices such as streambank stabilization, floodplain restoration, and/or riparian buffers will have to be implemented.”