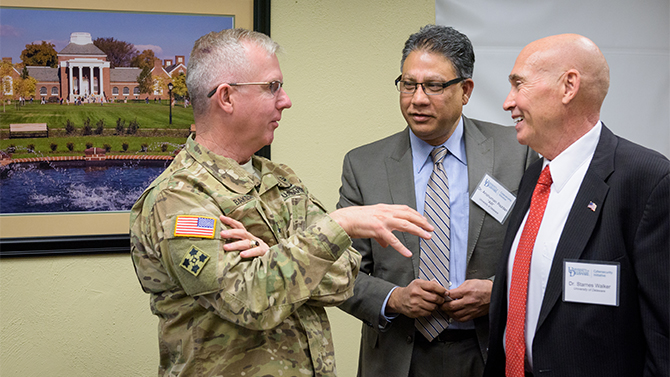 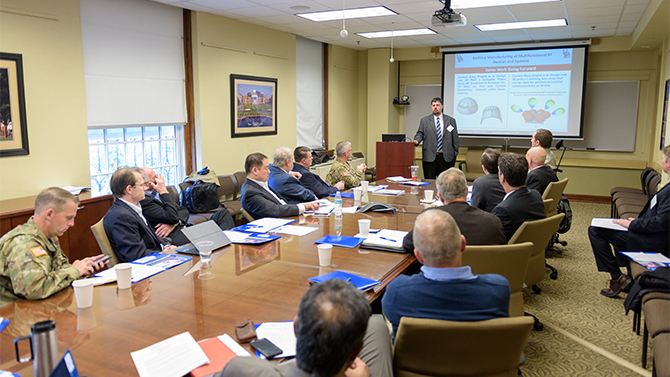 Prof. Mark Mirotznik, who specializes in electromagnetics and optics in the Department of Electrical & Computer engineering, describes potential applications of ongoing research. 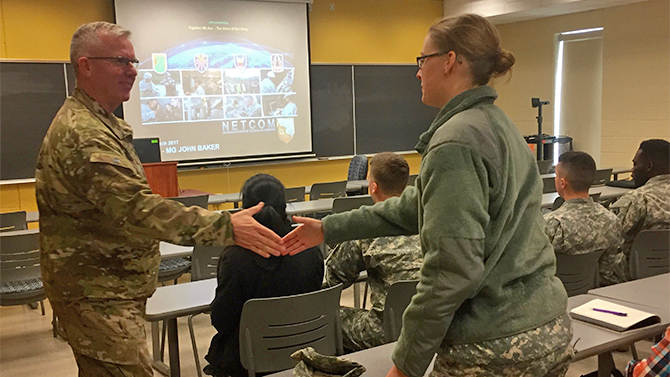 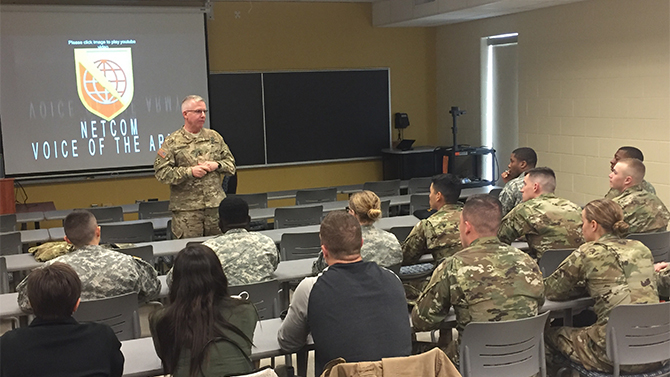 U.S. Army Maj. General John Baker urged cadets and students in the science, technology, engineering and mathematics (STEM) fields to consider investing their cyber skills in service to the nation.

U.S. Army Gen. John Baker was on a mission, of course. As commander of the Army's Network Enterprise Technology division and its 16,000 troops, he is in frequent motion around the world, ensuring the Army's computer systems are secure and the "Voice of the Army" has full, free expression.

Fresh from recent stops in Korea, Hawaii, Afghanistan, Iraq, Germany, Belgium and Italy, he cleared a day for Newark, Delaware, to get up to speed on the University of Delaware's Cybersecurity Initiative and research projects that could support and protect Army forces.

He later called the 3 1/2-hour briefing "phenomenal." The need for cyber expertise is phenomenal, too.

Cybersecurity is mission critical – not only for the Department of Defense, but for industry, business, the world's financial markets, transportation, energy, food and water supplies, to name just a few sectors vulnerable to attack.

In recent days, news reports have revealed enormous security breaches, including attacks on "smart" devices that draw data and communications from the internet, successful efforts to take control of autonomous vehicles such as self-driving cars, and programs that track and/or record users' data and activities without their knowledge.

The attacks on the Army's networks are constant, Baker said, and they come from many different adversaries in unique and often complex ways.

"That's what is most concerning," he said. "It might take days, months, a year to detect malware on a network. I need to detect, block, blunt and delete it."

The cyber terrain is complex and fraught with perils of which most of us are blissfully unaware. Baker says the search engines people use most often explore only about 12 percent of what is actually out there. Below the tip of the iceberg is what is known as the "dark web," the cloaked domain of adversaries – some of whom are doing the bidding of nation states or criminal organizations – and hacktivists. Baker doesn't explain much about that, but he and others with special security clearances are in the mix of that witches' brew, too.

UD's Cybersecurity Initiative is well suited to address a broad array of challenges and train others to secure their assets and communications. Educators and researchers have expertise in cryptography, robotics, critical infrastructure controls, response to attack, recovery, countermeasures, engineering of hardware and software, network construction, business practices and analytics – and the bewildering array of behavioral factors humans add to it all.

Starnes Walker, professor and founding director of the Cybersecurity Initiative, brings a background in physics and expertise in national security, having served in the U.S. Departments of Defense, Energy and Homeland Security and as a chief technology officer in the U.S. Navy. Under his leadership and with the help of Stephan Bohacek, associate professor, UD has been designated a Center of Academic Excellence in Cyber Defense by the National Security Agency and the Department of Homeland Security.

The UD program has expanded significantly in its first two years, with a reach that extends from a Cyber Camp for school-age learners to professional development for cyber pros and graduate degrees. Chase Cotton, professor in the Department of Electrical and Computer Engineering, said 70 undergraduate students from half a dozen degree programs are pursuing minors in cybersecurity. Fifty-eight students are pursuing master's degrees in the program and a certificate program is offered to those in business and industry. Fifty students are enrolled in a certificate program at the U.S. Army's nearby Aberdeen (Maryland) Proving Ground.

A Cyber Range is under construction in Evans Hall for training programs that will serve business and industry and Walker hopes to see a cyber facility that meets Department of Defense security requirements emerge on the growing STAR Campus.

"I'm really impressed," said Lt. Gen. (ret.) Guy Swan, vice president of the Association of the U.S. Army and a member of the UD Cybersecurity Initiative advisory board. "It's a very entrepreneurial effort that has expanded way beyond the University to the military and banking sectors. The strength of the program is it can put theoretical ideas into practice. It's a large asset for the University."

And of critical significance for national security.

In other briefings, Baker heard about:

• The UD-based BADER Consortium's work to help wounded warriors reach optimal function after loss of limbs, combat-related musculo-skeletal injuries and other traumas. This includes rehabilitation programs, new materials to strengthen prosthetic devices and technologies that give them new options.

The goal is not to just get troops back on their feet and able to get a glass of water on their own, said Steven Stanhope, professor and associate vice president for research and director of the BADER Consortium. The goal is to maximize their function. As an example, he showed a video of one service member running on a treadmill at breakneck speed – on two prosthetic limbs.

"This is not your grandmother's or grandfather's rehabilitation," Stanhope said.

• Development of lightweight composite materials – some of the lightest, strongest, stiffest available – for use in protective gear for soldiers, vehicles and other purposes, meeting specified strain and pressure ratings, durable in extreme conditions, engineered and verified at the nanoscale. UD's Center for Composite Materials has been a federally designated Center of Excellence for 37 years, said Director Jack Gillespie.

Gillespie, professor of mechanical engineering and materials science and engineering, also described "smart" materials that respond to conditions and offer many advantages – stiffening to provide support when a heavy load is carried, for example, or adjusting to heat and moisture as detected by sensors within materials.

Materials that add strength while reducing weight are of great advantage, Baker said. He recalled how previous efforts to add armor to tanks increased their weight to more than 80 tons, far more than many roads and bridges can bear.

• New developments in radiofrequency devices and systems to boost communication capacity, along with 3-D printing methods that allow for parts to be produced in far-flung places.

One such printer is "material agnostic," said Mark Mirotznik, professor in the Department of Electrical and Computer Engineering, an expert in electromagnetics and optics. "Anything you can put into a syringe you can print onto the surface – to lines of 25 nanometers, about the width of a human hair."

Electronic devices can be woven into fabrics, providing many new options. And new technologies have reduced the cost of some projects thousands of dollars to $10, he said.

Baker said such developments could remove obstacles for troops who sometimes are stymied by broken parts that can't be replaced because the company that made them has gone out of business.

• Advances in photonics and technologies that allow videocameras to see radio waves and produce images through plywood and tarps. A video shown by Garrett Schneider, assistant professor of electrical and computer engineering, showed how the new technology could provide images even in heavy dust conditions, such as those created when a helicopter approaches a desert area. New imaging materials offer far better performance at lower cost and lighter weight.

Baker said GoPro cameras are the best some troops can hope for, but they are unstable and only function in daylight conditions. That can mean authorities do not get enough information to make critical decisions about how to respond to potential threats.

"Images are critical," he said. "Unless it is pure self-defense, response is a political decision and images have to get back for the president's consult."

When that is not possible, "you could have young sailors making strategic decisions," he said.

After several hours with UD researchers, Baker hustled from Evans Hall to Colburn Lab to talk to ROTC cadets and students in the STEM (science, technology, engineering and math) fields about leadership and career options.

He urged all to consider investing their growing cyber skills in ways that strengthen and ensure national security, whether in military or civilian roles. The salaries can't compete with those offered by Google and other mega corporations, he acknowledged, but the satisfaction of national service and the sense of teamwork are high.

"UD's full array of cybersecurity programs, including Cyber Scholars, the minor and M.S. cybersecurity degrees, the new Cybersecurity Range and in-depth cybersecurity research conducted by faculty are resonating with students and employers," said Kenneth Barner, professor and chairman of the Department of Electrical and Computer Engineering. "Enrollments continue to grow rapidly and research contributions are helping tackle the cyber challenges of today and tomorrow."