Honoring the past while looking to the future

Leader. Pioneer. Visionary. These are a few terms many use to describe James O’Neill, founder and former director of UD’s Center for Economic Education and Entrepreneurship (CEEE). The former UD professor of economics led the CEEE to great success for more than 40 years, retiring in 2013.

As the CEEE celebrates its 50th year of empowering educators and students with the tools for economic, financial and lifelong success—while also taking on more programming than ever before—O’Neill is being honored and recognized with a fund created in his name. The James B. O’Neill CEEE Faculty and Staff Support Fund will be used to recruit, retain and reward distinguished faculty and staff members, as well as to support the daily operations of the CEEE and will be managed at the discretion of the director of the Center. Ultimately, with full support, the fund will endow the CEEE director position.

“I feel very humbled to have this fund in my name,” said O’Neill. “It’s an honor to be recognized, but a variety of factors enabled me to achieve success at the Center. I had so much support from the University presidents, business community, the State of Delaware and members of the academic community. Whatever success I achieved with the Center through my lifetime, is due to strong relationships with others and I am indebted to a number of individuals who have been so helpful to me.”

While his modesty keeps him from sharing many of his own achievements, O’Neill is most proud of the creation and launch of the Master of Arts in Economics and Entrepreneurship for Educators in 1981, the first program of its kind in the world.

“The master’s program is designed to train teachers to be the economic educators for other teachers and it has had participants from across the country and around the world,” O’Neill said. “At the time, other countries were exploring the free markets, so we had participants from China, Japan, the former Soviet Union, New Zealand and more.”

O’Neill is hopeful that the new named fund will ensure the current CEEE director and recipient of the James B. O’Neill Directorship, Carlos Asarta, Ph.D., will be able to not only sustain and grow the important K-12 educator programs, but also continue to create new, innovative economic education and financial literacy programs. Asarta assumed the role of CEEE director in 2013 and continues to build on the foundation O’Neill created.

“I can’t think of any other economist who has had a bigger impact on economic education than Jim O’Neill. The fact that donors are stepping forward to honor him is a symbol of the quality of the work that he did as well as of the wonderful, kind, and humble person that he is,” said Asarta. “The CEEE has been innovating for the last 50 years. Just this past academic year, the Center hosted 143 training sessions attended by over 2,250 economic, personal finance, and entrepreneurship educators. It is because of the foundation provided by Jim, and his perseverance, that we can continue to prepare K-12 educators so that their students graduate high school as informed and productive citizens.” O’Neill was ahead of his time in hiring the first economic education field consultant in our national network, Professor Bonnie Meszaros, EHD80PhD, which furthered his innovative idea of the “multiplier effect.” The method of training teachers who then become trainers of other teachers and influence the education of thousands of students during their careers has been “an incredibly effective way to disseminate economic, personal finance, and entrepreneurship education around the world,” Asarta shared.

Meszaros, who still works for the Center, also agrees there is great success in O’Neill’s foundational educational methods and recently made a gift to support the James B. O’Neill CEEE Faculty and Staff Support Fund to preserve O’Neill’s legacy and the CEEE efforts.

“Jim has always been a visionary and a leader in his field. He first hired me as a field consultant to travel to teach teachers—no one was doing that at the time,” Meszaros said. “I truly believe my career is due to his hiring me and encouraging me in continuing my education and professional development along the way. I really have a passion for the Center’s critical mission of helping students get a better understanding of economics and the world around them. As I prepare to retire, it will be hard for me to leave the Center, but knowing this fund will ensure the CEEE’s work can continue and it will continue to be a leader in the field of economic education, makes it a bit easier for me to move forward.”

In addition to inspiring his colleagues in the CEEE, O’Neill and his innovative approaches to economic education have motivated fellow Delaware Council for Economic Education (DCEE) members and lifelong friends to contribute to his named fund.

“I started at UD as a faculty member at the same time as Jim, and we have been friends ever since,” said Don Puglisi, H12. “I’ve also worked with Jim on the DCEE and through the CEEE. He certainly is humble and while it was a team effort to establish the Center and its success is due to many people, he has been a great leader, bringing together so many from the business sector, government and academic realms. Naming a fund in his honor is well deserved and overdue. Finding funding for the efforts of the Center year-by-year has always been a concern, and I’ve always thought that was risky. By establishing this fund, it provides a great deal of confidence in ensuring funding on a permanent basis to continue the critical work the CEEE does.”

Greg Lavelle, BE87, and his wife Ruth, BE87M97, chose to support O’Neill’s fund to not only recognize his impact on economic education, but to honor the economics professors they had while students at UD.

“I received a great foundation of economics at UD and about 15 to 20 years later, I became familiar with Jim’s efforts with the CEEE and DCEE when I became part of the Council,” Greg said. “With these connections with UD and the great professors we had and the important lessons we learned from them, my wife and I decided to support the fund. It is a great vehicle for people to give thanks for faculty who helped them along the way, while ensuring the important work of CEEE in educating teachers to educate students in economics continues to grow and evolve.”

As the collective giving for the James B. O’Neill CEEE Faculty and Staff Support Fund grows, Asarta is looking to the future of the Center.

“This funding will have a tremendous impact on the future of the CEEE,” Asarta said. “It will allow us to cover the administrative expense associated with the director position, freeing up additional financial resources that can be used to implement new programs and cover the expenses associated with current programs when funders change their priorities or funding becomes unavailable. In essence, this fund provides financial stability for the CEEE so that we can continue to prepare thousands of educators every year in economics, personal finance and entrepreneurship by providing dynamic, standards-based professional development and resources for the next 50 years.”

For more information about the fund, contact Jalen Randolph, associate director of development, Lerner College of Business & Economics, at jalenpr@udel.edu or 302-831-3125.

Make a gift in honor of Jim O'Neill 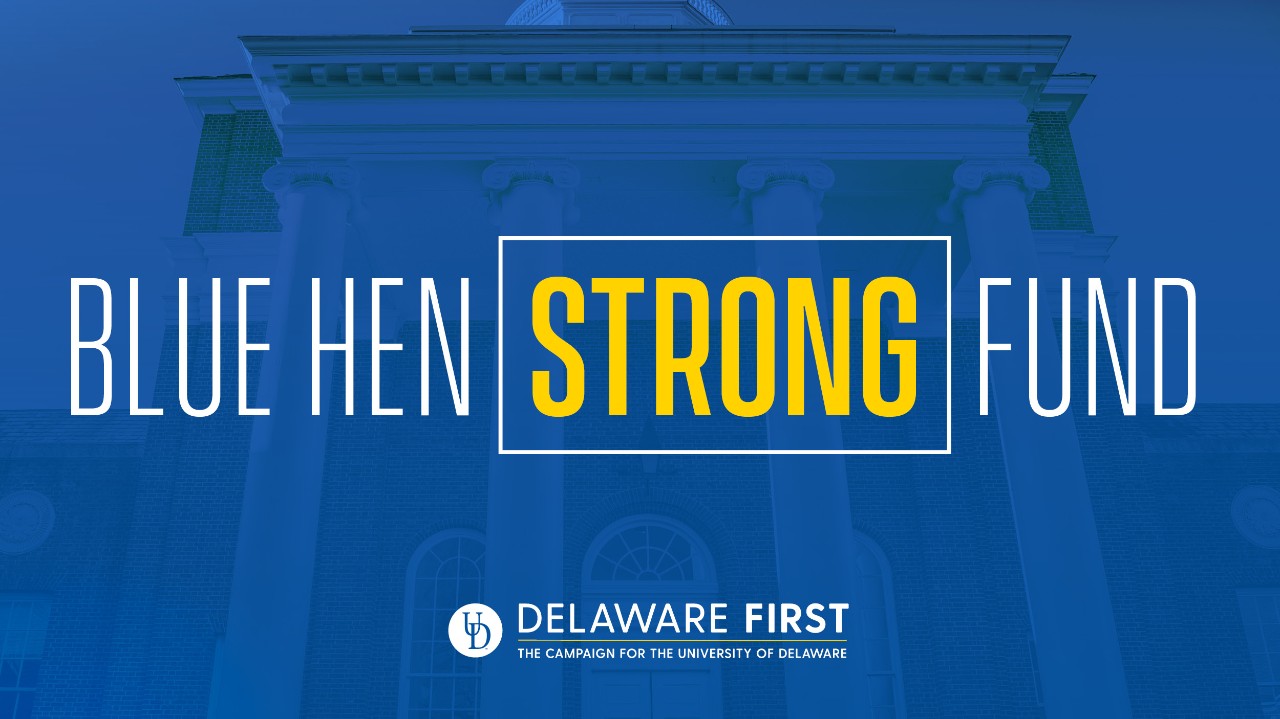 Coming Together for our Students

The Blue Hen Strong Fund provides immediate help for students suffering hardships as a result of the pandemic.