Rodrigo Vargas (left), associate professor of ecosystem ecology and environmental change at the University of Delaware, and doctoral student Mario Guevara have developed a new, more accurate way to map predicted soil moisture, even in areas where no data have been available.

Soil moisture is easy to see when your favorite Little Leaguer slides into second base the day after a big summer storm. The mud splattered on that little hustler’s uniform tells the story.

Trying to gauge soil moisture across large areas — regions, nations, continents — is a whole ‘nother challenge, and a critical one. Knowledge of this dimension of our ecosystem is extremely important for farmers, planners, scientists, insurance companies and anyone concerned about preparing for global environmental change.

“Understanding these patterns is critical to national and international security,” said Rodrigo Vargas, associate professor of ecosystem ecology and environmental change in the Department of Plant and Soil Sciences at the University of Delaware. “We cannot measure everything everywhere all the time…. So we are using alternative approaches, such as machine learning that helps us get insight from complex sets of data.” 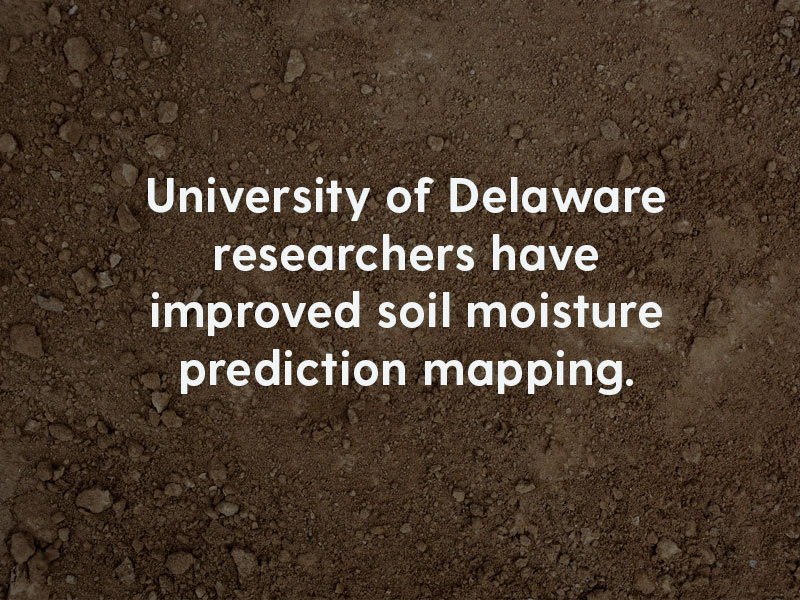 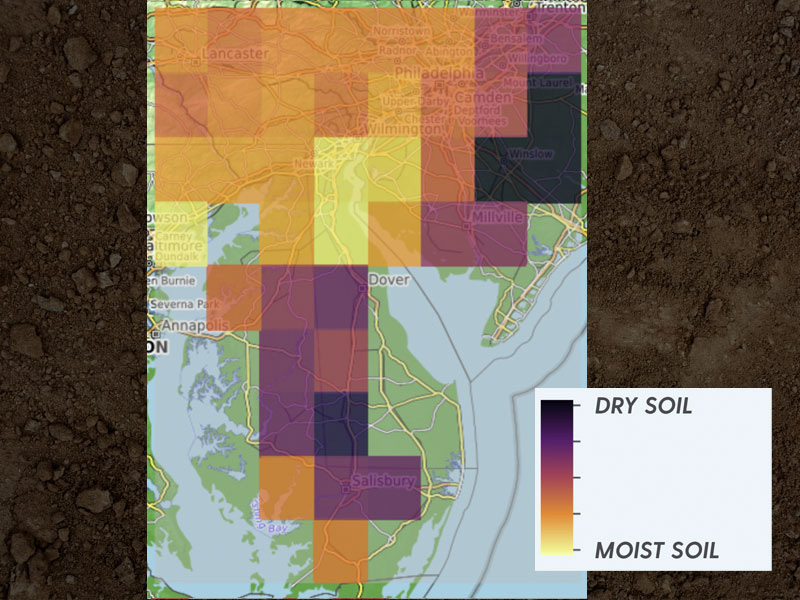 This map shows the previous level of detail possible, with each of these grids about 27 kilometers square. 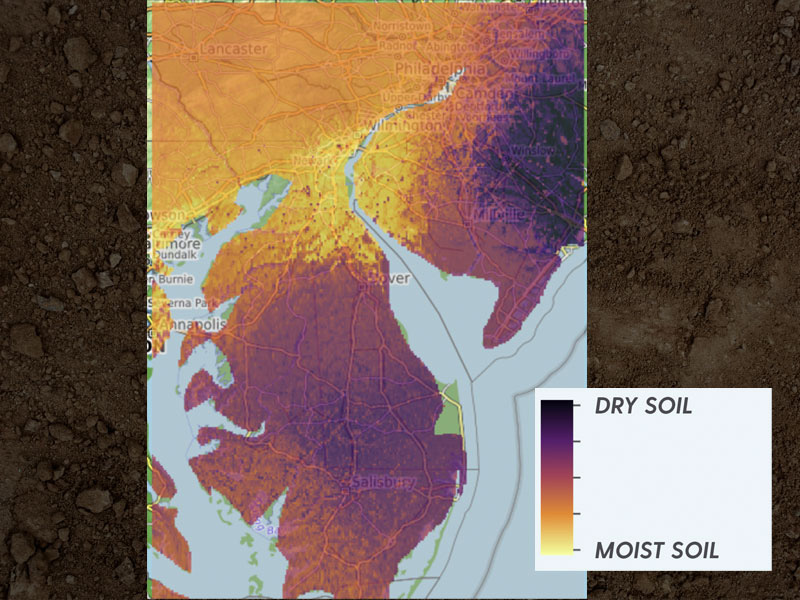 Now Vargas and doctoral student Mario Guevara have developed a new approach that sharpens our ability to predict soil moisture, even in large areas where no data have been available. Compared to standard estimates produced by satellite-based sensors, the new approach increases the accuracy of these estimates by more than 20 percent. It also makes it possible to predict soil moisture conditions in much smaller areas and in greater detail than standard models have been able to show. They described their work in a recent issue of PLOS ONE, a peer-reviewed journal published by the Public Library of Science.

The best data on soil moisture now is collected using satellite-based sensors that deliver predictions in grids of about 27 kilometers per pixel. That’s a space almost 17 miles square, about the distance from Main Street in Newark, Delaware, to historic New Castle on the Delaware River.

That’s helpful for analyzing regional or global patterns, but such a large scale can provide only limited information on local conditions.

The method Guevara and Vargas have developed provides much higher definition, improving resolution from 27 kilometers to 1 kilometer per pixel — or from about 17 miles to just over half a mile. That’s roughly the distance from UD’s Trabant Student Center on one end of East Main Street to the Newark Shopping Center on the other. Much tighter and much more useful for statewide applications.

Because soil moisture varies by location and changes over time, reliable measurement and predictive methods are essential. Topography — defining the physical parameters of the Earth’s surface — is a critical factor for soil moisture estimates. Elevation, slope and other land-surface characteristics are strong predictors of how water — from rain, irrigation and other sources — will move, drain and affect an area.

“We need to understand water dynamics,” Guevara said. “We understand a lot of components of the water cycle, but there is a lot we don’t know. We want to protect water resources and know how they are distributed, their geography. Soil moisture is an important indicator of water resources.”

Using satellite-based sensors, soil moisture can be measured to a depth of about 5 centimeters (just under 2 inches).

But that thin layer of soil holds crucial information.

“Superficial soil moisture is a key indicator of soil dryness. It influences soil productivity and ultimately soil health,” Guevara said, “as the water in the first few centimeters of soil is some of the water used by crops or by the soil biodiversity (cycling nutrients) controlling the capacity of soil to produce food, fiber and store water.”

In developing the new predictive model, Guevara used satellite data on soil moisture gathered for more than a decade (1991-2016) across the continental United States by the European Space Agency’s Climate Change Initiative.

He and Vargas worked in collaboration with UD Information Technologies, used the muscle of UD’s Farber high-performance computing cluster and drew upon the resources of the new Data Science Institute.

Guevara developed prediction factors using automated digital terrain analysis and defined 15 types of terrain parameters (such as slope and aspect, among others). He analyzed spatial structure and distribution of these parameters in relation to soil moisture and used an algorithm to select the best models.

The resulting predictions were validated by comparison to “ground truth,” field data on soil moisture from the North American Soil Moisture Dataset. This dataset, developed by UD alum Steven Quiring, who was a doctoral student of UD Professor and State Climatologist Dan Leathers, draws strictly curated data from more than 2,000 meteorological stations across the continental United States.

The next chapter of the research is extending the work to the global scale, Vargas said. More discussion on that is available in the journal Earth System Science Data.

The work is supported by a grant from the National Science Foundation and was done in collaboration with Michela Taufer, former professor of computer and information science at UD who now is at the University of Tennessee in Knoxville.

Rodrigo Vargas is associate professor of ecosystem ecology and environmental change in the Department of Plant and Soil Sciences. He earned a degree in biology at the National Autonomous University of Mexico in Mexico City, earned his doctorate in environmental sciences at the University of California, Riverside and did postdoctoral work in ecosystem ecology at the University of California, Berkeley. His research focuses on how biophysical factors regulate carbon and water dynamics in terrestrial ecosystems. He is a member of the American Geophysical Union and the Ecological Society of America.

Mario Guevara has a degree in biology from Michoacan State University in central Mexico, where he analyzed soil moisture conditions between forests and pasture lands. He worked at the National Biodiversity Commission in Mexico City for five years and started his doctoral studies in the Vargas Lab at UD in 2015, supported by a prestigious fellowship from Mexico’s National Council for Science and Technology (CONACyT).