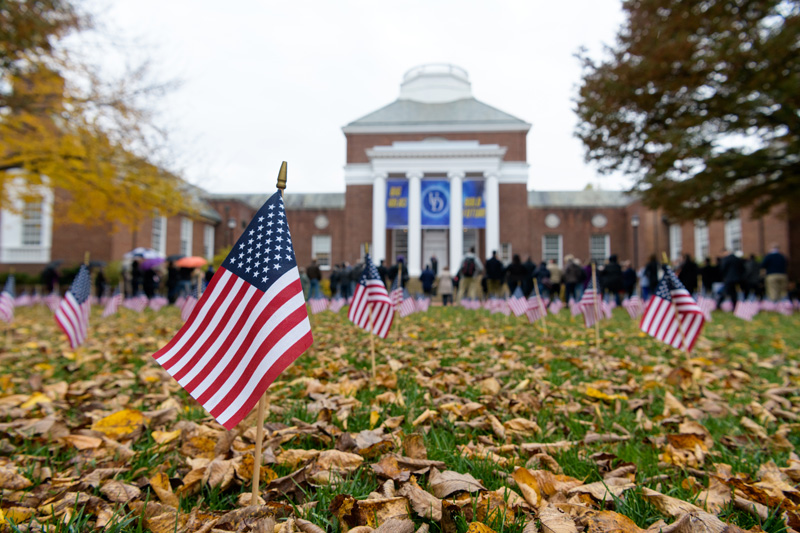 Nearly 7,000 flags were planted on The Green to represent Americans who have died in military service since Sept. 11, 2001. Veterans Day ceremonies honor all who have served. 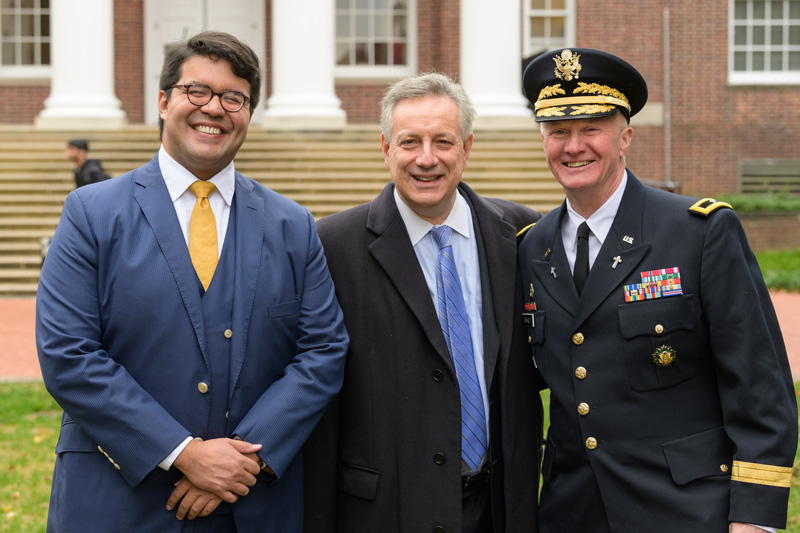 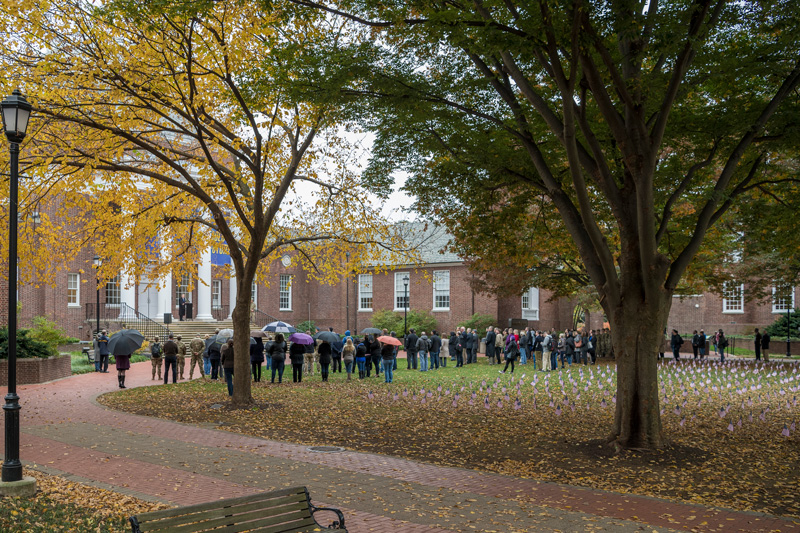 UD students, faculty, staff and community members - including many military veterans - gathered on Friday, Nov. 9 in front of Memorial Hall to honor those who serve.

UD ROTC students in formation during a gathering on Friday, Nov. 9 in front of Memorial Hall to honor those who serve.

UD President Assanis joins others to thank those who serve

Students, faculty, staff and community members — including many veterans — gathered under gray skies to honor military veterans on Friday, Nov. 9, in front of the steps of Memorial Hall at the University of Delaware. The event began with the presentation of colors by the New Castle and UD Police Departments and a performance of “The Star-Spangled Banner.”

Behind the Veterans Day ceremony, organized by the Blue Hen Veterans (BHV), was a backdrop of nearly 7,000 flags planted on The Green earlier in the  week to represent all those who have died in service since Sept. 11, 2001.

“Thank you all for taking time to be with us here today,” UD President Dennis Assanis said. “It’s essential that we gather as a community to pause and remember all veterans throughout American history. Especially those who have given their lives in service to our nation.”

He shared the history behind Memorial Hall, which was created to memorialize Delawareans who died during World War I. Each day, a display inside the building showcases the name of one veteran. At the groundbreaking event in 1923, Assanis said, students and UD President Walter Hullihen came with shovels and dug the foundation for the building.

“To me, the story of Memorial Hall demonstrates the deep sense of community and shared sacrifice that exists here at the University of Delaware,” he said. “It was built quite literally with the hard work and labor of this community.”

Memorial Hall is the center of campus, he said, which is emblematic because military veterans have always been central to UD. He noted that military training used to be a requirement at the University and, shortly after World War II, almost two-thirds of enrolled students were veterans, thanks to the GI Bill. Assanis thanked all veterans and gave special thanks to Chris Lucier, vice president for enrollment management at UD, and Brooks Raup, UD’s veterans services coordinator. Both are Army veterans and have worked on behalf of veterans on campus and across the state.

“They do things for the benefit of veterans beyond the four corners of this wonderful institution, so I’m so proud of them,” Delcollo said. “They also spearheaded this absolutely incredibly effort. This breathtaking view that I see when I look out to a field of flags. A really beautiful sight this morning.”

Veterans Day began as Armistice Day, and as a means to mark and remember the end of World War I, which was Nov. 11, 1918. In 1954, after World War II and the Korean War, President Dwight Eisenhower signed a law changing the name of the holiday to Veterans Day to better include veterans of all the wars, living or dead. Memorial Day is set aside for those who have died in the service of the country.

Delcollo reminded the crowd that veterans have sustained injuries and suffer from mental health problems such as post-traumatic stress disorder (PTSD).

“Veterans are heroes who face incredible challenges, who are willing to pay the ultimate sacrifice to protect and defend our ability — my ability to serve, to have votes cast for me, for all of you to have autonomy,” he said. “The ability to decide your future is in no small part because of the sacrifices of our veterans over the years.” Brig. Gen. Kenneth E. Brandt, chief chaplain in the Delaware Army National Guard, told the crowd he is honored to serve soldiers and their families in his current role. Brandt joined the military in 1989, was deployed to Iraq in 2008 and became a decorated officer while serving in various roles.

“Wearing this uniform is a way of saying we’re going to protect the freedom of worship, the freedom of speech for people to be who they are, to serve this country no matter who they might be,” Brandt said. “No matter what their race is, their sexual orientation, their political views, we protect those rights because that’s what this country is about and that’s why I wear this uniform.”

Jung-Ik Cho, BHV president, complimented his group’s members, Raup, the speakers and all of those who volunteered during the week of events.

“I’d like to thank all of you for joining us here today to honor and remember our veterans,” he said.

Blue Hen Veterans is a registered student organization recognized at UD.. Its mission is to provide military veterans with the support and advocacy needed to successfully transition to college, to excel academically and to gain employment after graduation. Gifts made to the BHV will support student veteran success by funding programming and social activities. Those wishing to donate to the University or Blue Hen Veterans in the name of a veteran can visit a website created for the purpose.

On Sunday, Oct. 28, a group of about 60 volunteers gathered at the Delaware Veterans Memorial Cemetery in Bear to clean grave markers and benches.