In the marsh with black ducks

For one of the first times at a large scale, University of Delaware researchers are studying breeding black duck populations in coastal North Carolina to determine nesting site preference and hatching success. This will better inform conservation practices in the area.

The researchers are also looking at the implications of sea level rise that directly correlate with the salt marsh, which is where the black ducks mostly nest. The research is being led at UD by Chris Williams, professor in the Department of Entomology and Wildlife Ecology in the College of Agriculture and Natural Resources, and Daniel Lawson, a master’s level student in Williams’ lab. Funding was provided by the North Carolina Wildlife Resources Commission (NCWRC).

The population of black ducks has been declining since 1955 and is now just starting to stabilize. Williams attributed this stabilization in part to the formation of government funded joint ventures that brought people together across state boundaries to help with conservation goals.

One of those joint ventures was the Black Duck Joint Venture, which was created in the 1980s when a nationwide management plan for all waterfowl species was established.

“We’ve been doing a great deal of research on mid-Atlantic wintering black ducks ecology for the last decade,” Williams said. “However, there is a new focus by the federal government to better research limitations to their breeding ecology. While the majority of black ducks nest up north in places like Quebec in forested wetlands, there is also a smaller population that breeds along the Mid-Atlantic coast.”

North Carolina is the southernmost extent of the black duck’s breeding area. “In recent years, North Carolina started breeding season helicopter surveys to quantify how many black ducks stayed in the area to nest,” Williams said. “But they had no idea the microhabitat choices by these birds to nest and they didn’t know how successful they were.”

Lawson said that the researchers travelled to North Carolina from March through the end of June last year and conducted nest searches.

“Within the Carolina brackish marshes, there are areas of slightly higher ground close to the marsh perimeter,” Lawson said. “It is here where the marsh borders the back bays, that we’ve found a little over half the nests. The other half we found on dredge spoil islands within the Pamlico and Roanoke Sounds.”

In order to find the nests, they would drag a rope with cans attached to it across the top of the vegetation they were searching.

Raccoons look for nests to find the food they need.

“We were literally dragging thousands of acres of marsh and when we got close enough, the hen would pop up off the nest,” said Lawson. “Once we found the nests, we would monitor them. Part of the monitoring included trail cameras, which we wanted to have on some of the nests to solidify what caused the nest successes or failures.”

Along with trail cameras, one of the other monitoring practices the researchers employed was to look at the incubation stage every week to see how the eggs were progressing, counting how many eggs were in a clutch and taking other metrics like egg length and width.

“We would follow the nests until they either hatched, were abandoned, or were destroyed whether it be from flooding or depredation from a predator,” said Lawson. In addition, they also took vegetation metrics that will be used to build a habitat selection model.

Once a nest was terminated, they would take vegetation height and vegetation density to try and get an idea of where the black ducks were selecting to nest.

The main factors that led to unsuccessful nests were predators and flooding.

“One flooding event wiped out six of our seven nests that we had at the time. So that was obviously a factor and we caught it on camera,” said Lawson. “Another nest predator that we never would have suspected is the bald eagle. We caught it actually depredating a nest along with raccoons, which we kind of expected.” They also employed a drone to try and help with the population estimates but Lawson said because the area was so large and the ducks were so hard to spot with the drone—which used heat signatures to look for the birds—that it was not as successful as they envisioned.

Lawson will return to North Carolina in 2018 with the ultimate hope of building a geographic information system (GIS) model to help inform conservation practices in the area to save the best habitat that the black ducks use to build their nests.

“We’re trying to find where they are building their nests and if there are characteristic patterns of vegetation. If we can see it through a GIS and if we can identify what habitat the ducks are using, and the distance to edge, then we can think about it from a sea level rise scenario,” said Williams. “We will hopefully be able to determine how much land will be lost from different sea level rise scenarios and determine the implication for future breeding black ducks. That’s the big conservation question for North Carolina. Is this a population that they need to conserve and can they conserve it?”

The researchers would also like to have a chronology of nest initiation and peak nesting dates with implications for marsh burning guidelines by the end of the research as well as see how nest success and failure in North Carolina differs from the rest of the black duck range. They are hopeful that this data can also be extrapolated to other Mid-Atlantic states.

“Most of the studies in the Mid-Atlantic and Chesapeake Bay area have found that a small percentage of black ducks choose to nest in brackish marsh habitats. The majority choose more upland sites,” said Lawson. “From our research so far in North Carolina, we are finding that a large percentage are choosing to nest in the brackish marsh. I believe these findings will help complete the breeding black duck picture and will answer future habitat conservation questions that specifically have these ducks in mind.” 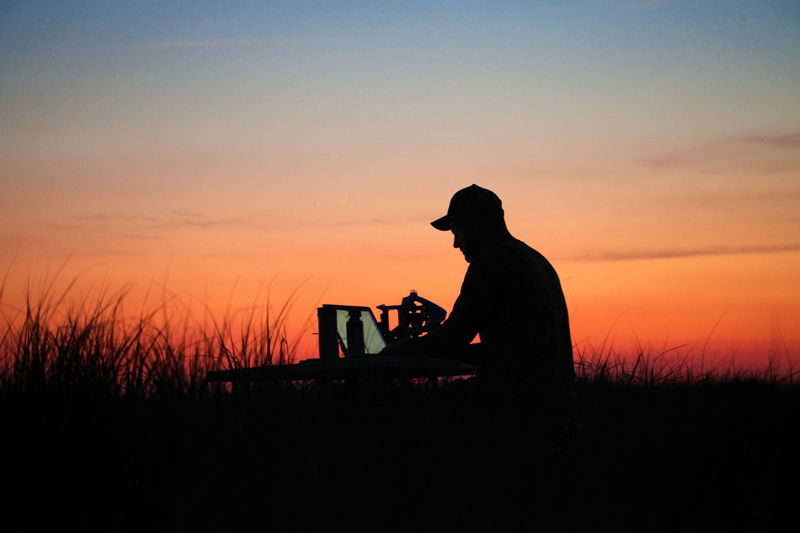 UD researchers plan to return to the North Carolina marshes in 2018 for further study of black duck nesting habits.