Science made some important contributions to life on this planet in 1987.

It was the first time a heart-lung transplant was accomplished, the first year DNA samples were used in a criminal conviction, and it was the birth year of the Perl computing language, now known as the "duct tape of the Internet."

It was also the first year the National Science Foundation offered grants for Research Experience for Undergraduates summer programs. The University of Delaware's College of Earth Ocean and Environment's marine science program was among the first programs offered that year.

In the 30 years since, CEOE has hosted 298 REU students, including 10 this summer, according to program coordinator Joanna York, assistant professor in the School of Marine Science & Policy.

UD had four REU teams in operation this summer, each with a different emphasis. The program is open only to students from outside of Delaware, as required by NSF. Students from dozens of universities around the nation came to UD to work on research, explore future study options, learn protocols and skills.

They received close mentoring by UD graduate students, postdoctoral scholars, and faculty and had opportunity to present their research as part of the eighth annual Undergraduate Research and Service Scholar Celebratory Symposium.

Student research in CEOE this summer was as diverse as marine science itself and included microplastics in the Delaware Bay, use of drones to map coastal areas, new approaches to interpretation of satellite sensing of the ocean, metal dynamics at hydrothermal vents, genetic diversity of harmful algal species, sea scallop mortality and horseshoe crab egg development.

Marina Franc, a chemistry major at the University of Massachusetts-Amherst, worked with faculty mentor Prof. George Luther and spent a good bit of time aboard the University’s 146-foot research vessel, the R/V Hugh R. Sharp.

Two REU teams worked out of the College of Engineering, where dozens of students were hosted by the Department of Chemical & Biomolecular Engineering and the Center for Biomechanical Engineering Research.

Though it was only the second year of that program, applications doubled to 129, compared to 64 in 2016.

"Some of our participants are already matriculating to grad school, so we are pretty excited about the success of the program," Higginson said. "This year, our special seminar was by Jenni Buckley [associate professor of mechanical engineering] who talked about career options in biomechanics. Plus we hosted a canoe trip and presented best poster awards after the research symposium."

Students focused on osteoarthritis research, gaining experience in a biomechanics research lab and increasing their understanding of molecular, cellular, tissue and joint-level biomechanics.

"The program offers not only a deep research experience, but also professional development opportunities like workshops on time management, graduate school and visits to industrial and government R&D laboratories," Furst said. "It also introduces students to the cutting-edge research being done at the University. We hope to recruit some of these students to our Ph.D. program." 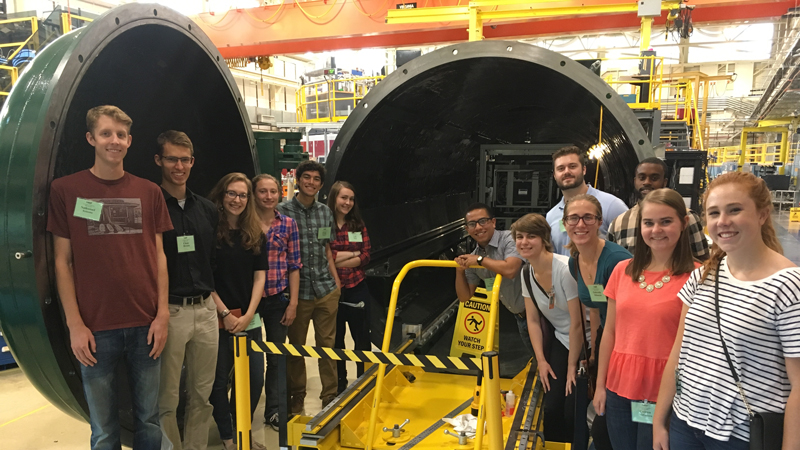 Among this team's activities was a visit to the National Institute for Standards and Technology's Center for Neutron Research in Gaithersburg, Md., where they saw the new vSANS (very small angle neutron scattering) facility.

Research ethics also was a focus of study for this team, which had support from NSF and the Department of Defense Air Force Office of Scientific Research.

A fourth REU team, focused mostly on chemistry and led by professors Karl Booksh and Sharon Rozovsky (chemistry and biochemistry), was designed for students with disabilities. Students pursued research with a faculty mentor and gathered as a team to discuss challenges and develop strategies for further study. (Link to related UDaily story is here.)