Third-year nursing students recently learned what it was like to care for a patient before and after a tracheostomy. But they didn’t read about it in a textbook or watch a video.

Instead, they provided the care themselves. In the renovated simulation lab at McDowell Hall, they practiced with actors from Healthcare Theatre who played the role of patients and donned wearable technology to increase the realness of the exercise. Overhead cameras followed their movements as they interacted with the patient while a simulation instructor watched them from a control room. 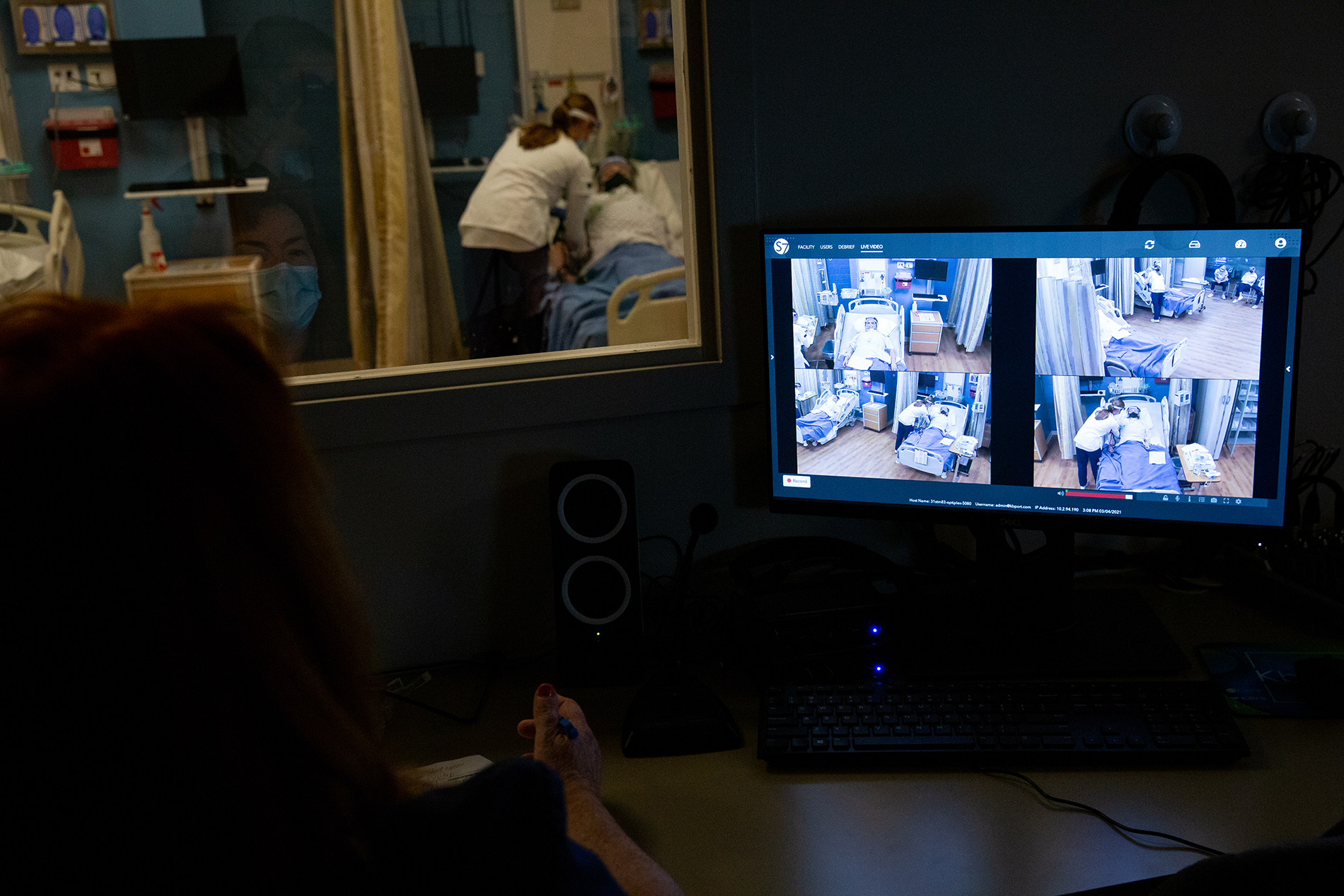 Recent renovations to three second-floor classrooms are allowing for these accessible learning opportunities that also align with the updated nursing curriculum. The space, which includes a six-patient suite along with two private rooms, makes it possible to create multiple immersive experiences for students that more closely resemble what happens in a clinical setting, said Heiddy DiGregorio, assistant professor of nursing and director of Simulation and Interprofessional Education in the School of Nursing (SON).

“This gives them opportunities to learn that are safe,” DiGregorio said. “They're a very tech savvy group of students, so when they have these opportunities, it's pretty spectacular.”

Changes to the nursing curriculum and a need for more lab space prompted the renovations. The resulting space is intended for use with adult simulations, which complements the pediatric simulations that are set up on the floor floor of the Tower at STAR, DiGregorio said.

Joanne Creasy Thomas, an instructor in the simulation program, said the renovated space allows more students to participate in simulations while also giving instructors the chance to help as needed. The larger room also makes it easier to adhere to the safety protocols instituted as a result of the coronavirus pandemic.

“It's very flexible,” Creasy Thomas said as she watched from the control room as students rotated through the simulation. “You can zoom with the cameras to the abdomen or to the IV fluid and read it. You get a pretty good bird's eye view of what they’re doing, so you can see what’s right and what they need to fix.”

During the tracheostomy simulation, the junior nursing students who weren’t part of the active simulation watched as observers. Then the students switched places, with the observers playing the role of active participant nurses for another phase of patient care. DiGregorio said this is intentional to help students grasp the dynamic elements of patient care and also understand the critical role communication plays when working as part of a team.

“The data says observers learn every bit as much as the active participants,” DiGregorio said. “It’s really a collaborative effort, with roleplay and dress rehearsals with Healthcare Theatre and the equipment. There are a lot of pieces that have to go in and, even then, there’s a few little glitches, which will happen. It’s another chance for us to work it out and for the students to learn.”

The strength of UD’s simulation program has led to other nursing schools reaching out for assistance with mentoring and simulation best practices, said Elizabeth Speakman, senior associate dean in the School of Nursing.

“The SON has been invited to present at two special upcoming events: SimOps (Repurposing Program) and Laerdal "Live" webinar,” Speakman said. “Our previous Laerdal webinar had over 500 attendees on how to deliver simulation on a budget.”