University of Delaware data scientist Jing Gao and collaborator Brian O’Neill from the University of Denver have created a new global simulation model to predict how urban land will change over the next 100 years under different social and economic conditions.

University of Delaware data scientist Jing Gao is fascinated by the ways that cities and towns grow over time. This concept is known as urbanization.

Take Chicago, Los Angeles and New York. All of these are cities, but they each grow differently, in terms of how the city’s land areas expand. The same is true globally, from New Delhi, India, to Paris, France.

Gao, an assistant professor of geography and spatial sciences in UD’s College of Earth, Ocean and Environment, and collaborator Brian O’Neill, a UD alumnus and professor from the University of Denver, have created a new global simulation model to predict how urban land will change over the next 100 years under different social and economic conditions.

The research leverages data science and machine learning to provide a first long-term look at how urbanization will unfold — decade by decade.

The researchers describe their simulations in a paper published in the journal Nature Communications on Friday, May 8.

According to Gao, until recently it has been difficult to generate long-term, global forecasts of urban expansion. This is because while urbanization is a global trend, the way cities develop (buildings, roads, people, economics) can change over time. Additionally, this development can vary widely country to country, and even within different parts of the same country.

To understand how this change occurs, Gao and O’Neill used data science to analyze 15 global data sets depicting various aspects of urbanization, including a newly available global map series showing urban land change over the past 40 years based on satellite images of Earth. The global maps are accurate to within approximately 125 feet (38 meters) and provide a uniquely detailed look at past urban development that was not previously possible with this degree of specificity.

It should come as no surprise that the United States and most western European countries are already urbanized. India and China, which previously experienced rapid development, have now transitioned to steadily urbanizing. Rapidly urbanizing countries at present include many countries in Africa.

And here’s the data science part. Understanding these broad styles is not enough to capture — globally — how urbanization is playing out on the ground at a local scale.

To do this, the researchers divided the world into 375 small regions and ran a unique model for each region simultaneously, then pieced results from all models together to develop a global map. This information can shed light on how our cities may change and reveal potential impacts of urbanization that can inform local to global urban planners and policymakers.

The research team’s projections show that the total amount of urban areas on Earth can grow anywhere from 1.8 to 5.9-fold by 2100. On average, if past urbanization trends continue, the world will build approximately 618,000 square miles (1.6 million square kilometers) of new urban areas globally over the century. This is an area roughly 4.5 times the size of Germany, or, more than 225 million football fields.

How this urban expansion occurs, however, largely depends on societal trends in the years to come. This includes trends in economic growth, population change and lifestyle habits, and what level of consideration is given to how our habits affect the environment.

For both developed and developing countries, for example, countries in Europe and Southeast Asia, urban expansion is expected to roughly triple if society favors materialistic and fossil-fuel driven development instead of adopting a sustainability mindset.

In the U.S., the least urban expansion occurs if people are focused on sustainability, such as green development and environmental awareness. In this case, urban land is expected to grow by 1.3 times by 2100. But if people favor highly materialistic development over the same timeframe, with high consumption of fossil fuels and a material-driven society, sprawl-like urban expansion is expected, with close to four times the amount of expansion the U.S. had at the beginning of the century.

The U.S. already is among the countries with the largest amount of developed land, so four-fold growth in urban expansion is a lot.

“This is where our projections can inform policy and planning,” said Gao. “These projections can help researchers and analysts understand how large-scale changes that occur over a long time period, such as climate change, may affect local urban areas.”

Most individuals do not realize how changes to the landscape, such as buildings and roads, may affect their lives. In Delaware, for example, second homes being built near the coast often come at the cost of agricultural farmland. While these developments may increase an area’s economic prosperity, they can have other unintended consequences, such as increased potential exposure to coastal flooding and sea level rise.

And, no matter what socio-economic scenario was selected, the simulations show that most countries will become urbanized by the end of the century.

One interesting finding from the work is that although prevailing thought is that urbanization is primarily happening in the developing world, Gao said this may not be the case.

This begs the question: as developing countries in Africa continue to grow, will they ever catch up to or surpass developed countries like the United States in terms of urbanized land?

“According to today’s definition, Africa is expected to become urbanized by 2100,” said Gao. “But even if it continues developing at a very fast rate relative to the rest of the world throughout the century, it won’t catch up to developed countries like the U.S. because the difference at the outset is large and the developed world still keeps expanding its urban area.”

The maps shown here depict mid-level urban development in the eastern half of the United States between 2000 and 2100, as well as in Europe and Asia. Darker shades of green represent increasing levels of urbanization. 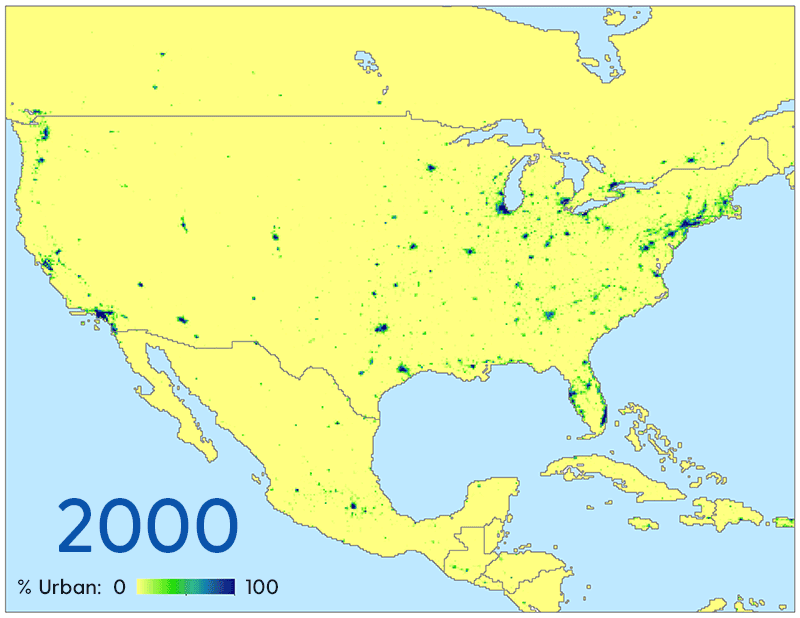 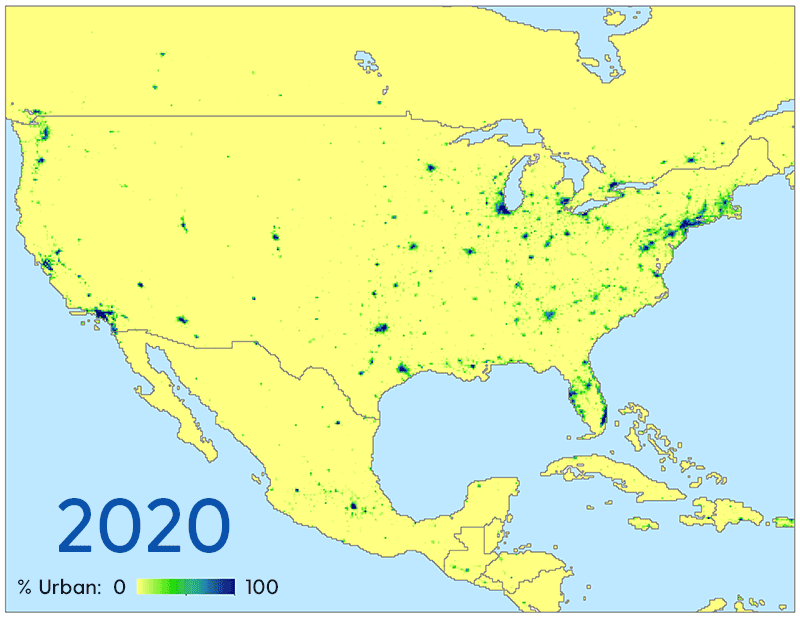 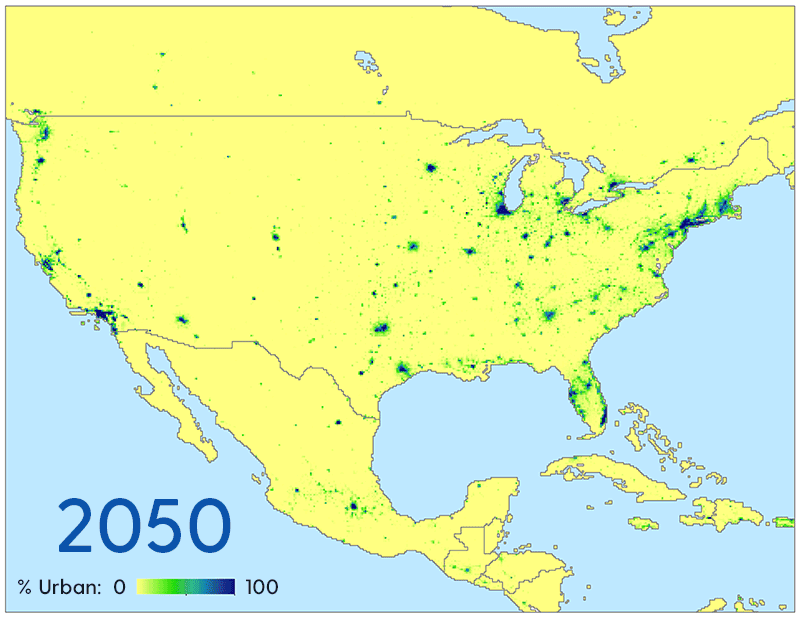 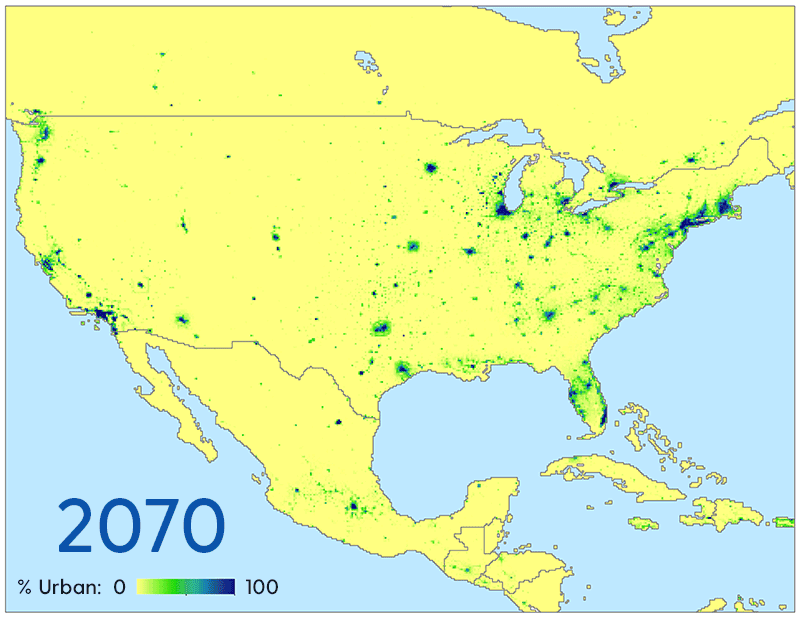 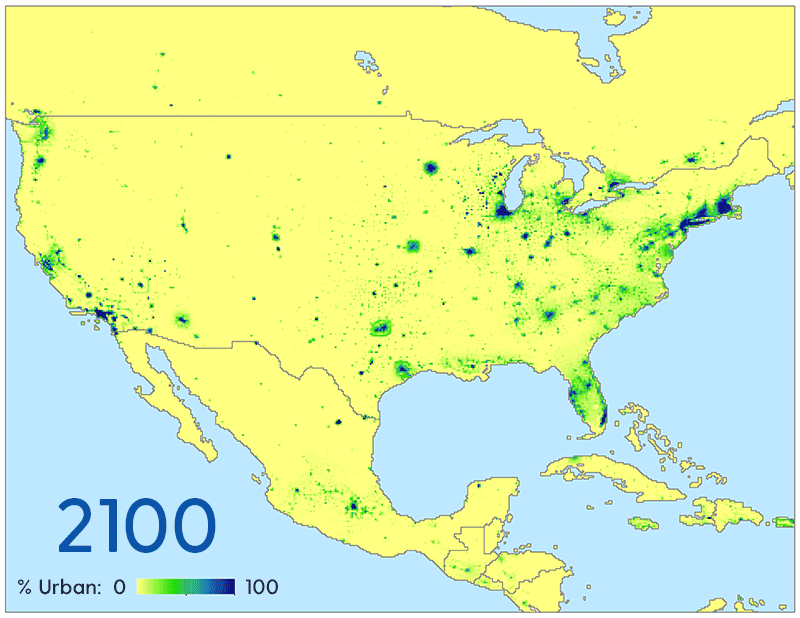 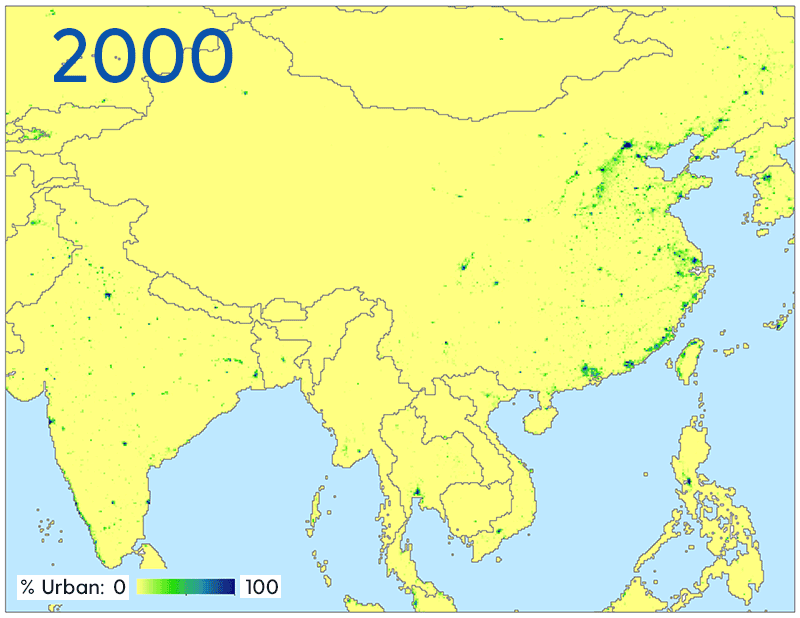 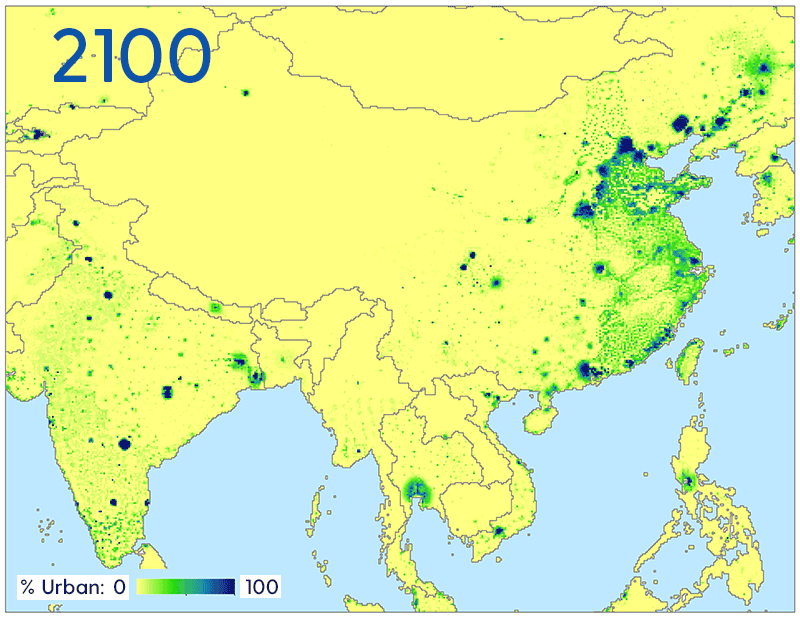 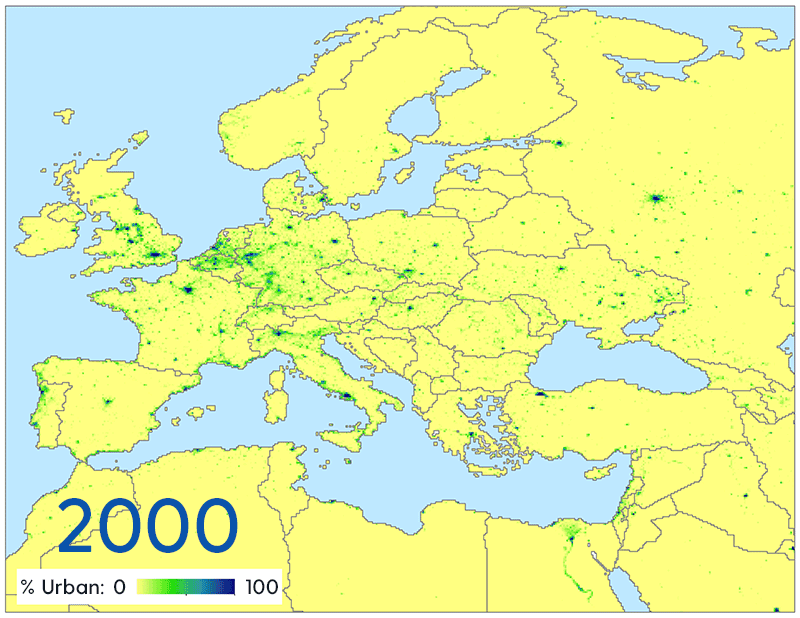 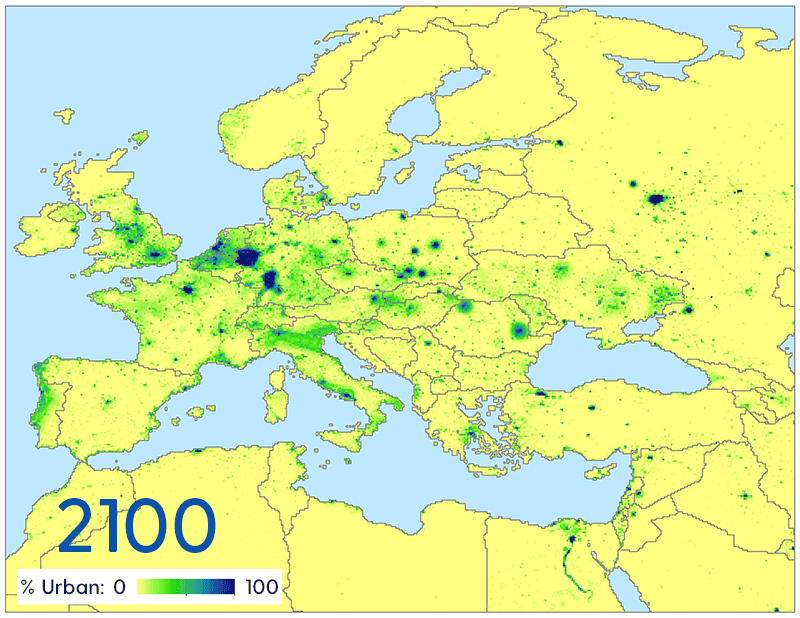 Jing Gao joined the University of Delaware faculty in 2018. She is an assistant professor of geography and spatial sciences in the College of Earth, Ocean and Environment and a resident faculty member in the University’s Data Science Institute. Gao previously served as a research scientist with the National Center for Atmospheric Research. She completed postdoctoral work at the National Center for Supercomputing Applications, and earned her doctoral degree from the University of Wisconsin-Madison.

Brian O’Neill is a professor at the Josef Korbel School of International Studies at the University of Denver, where he also directs research at the Korbel School’s Pardee Center for International Futures. O’Neill earned his master’s and doctoral degrees at New York University, in applied science and earth systems science, respectively. He earned a bachelor’s degree in English from the University of Delaware.