The event, entitled “Bridging the Divides,” was presented in partnership by the Center for Political Communication and the Biden Institute. In a series titled “As We Stand | Divided,” the discussion stood out for its emphasis on the value of political cooperation and consensus. Biden, a Democrat, and Kasich, a Republican, served together in Washington, D.C., for years.

“We’re so much focused on our differences that we forget our common goals,” he said. “Our country needs all of us … to work with each other, to work together.” 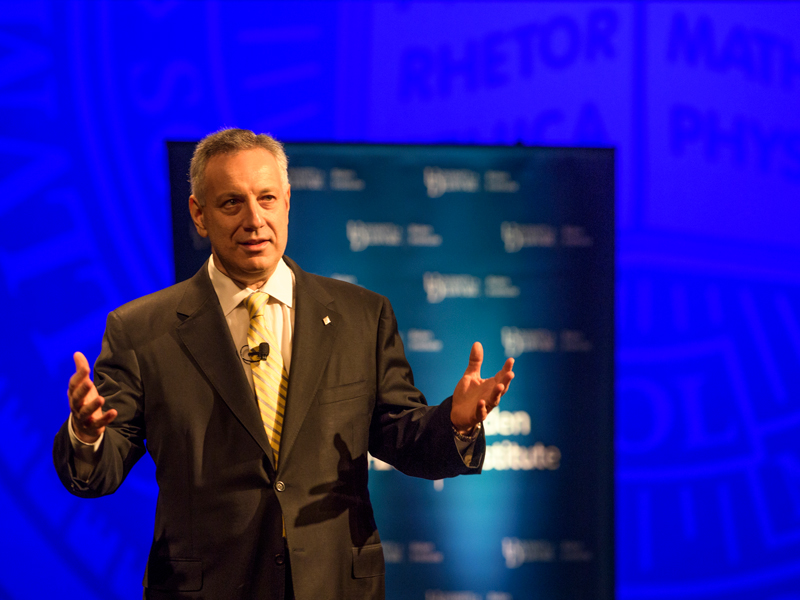 Biden and Kasich - both regarded by pundits as potential presidential candidates in 2020 - elaborated on that view and offered personal observations from their years of public service. Although from different parties and with different views on such questions as the role the federal government should play in various issues, both leaders said they shared similar blue-collar backgrounds, a practical approach to solving problems and mutual respect.

More than 20 media outlets – a mix of international, national and regional, print, TV, radio and online – covered the UD event.

“It’s not that hard for John and me to get along,” Biden said. “We both believe strongly in the capacity of the American people [and that] personal relationships matter.”

Kasich agreed, saying that the dysfunction in Washington today is extreme and harmful to the country. Focused on getting re-elected and avoiding a primary challenge, politicians increasingly play to the more extreme voters in their base, he said.

“The system itself has been breaking down on base politics,” he said. “The whole system is polarizing.” 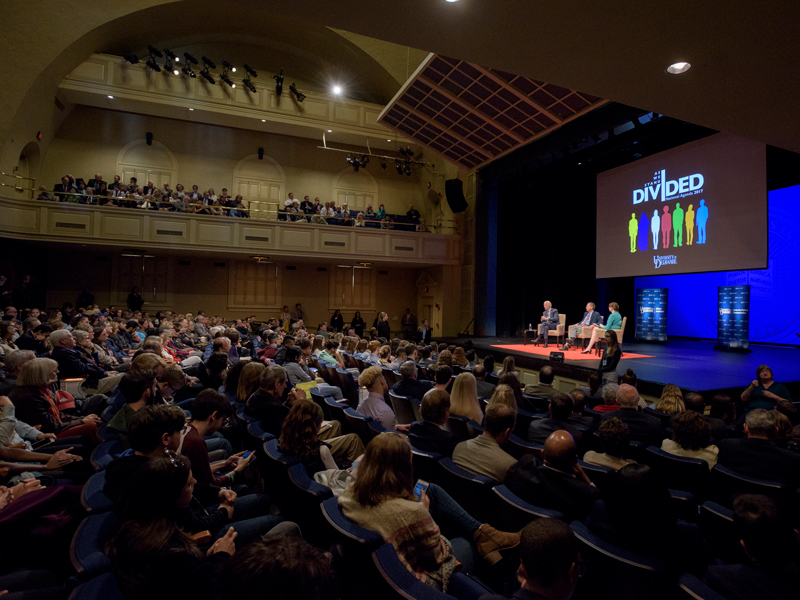 Biden recalled other times when Americans and their politicians were strongly divided on the issues—during the Vietnam War era, for example—but he said the political system operated more smoothly then. Legislators from both parties knew one another personally and were more likely to find common ground than they do today, he said.

“It’s not possible for this country to function without reaching a consensus,” Biden said.

Kasich added, “You solve problems from the center out.”

That philosophy is central to the National Agenda as well, said Lindsay Hoffman, who directs the series and moderated the discussion. A key National Agenda goal is to “demonstrate civil dialogue” in debating different points of view, said Hoffman, who teaches communication and political science and is the associate director of UD’s Center for Political Communication.

When asked about the Trump administration, Biden said the biggest concern may be, not policies, but what he called a breakdown in the norms of behavior. When the president insults a foreign leader on Twitter, for example, that does global harm to the image of the U.S., he said.

In answer to questions from Hoffman and from students in the audience, the two men also discussed their views on free speech, economic and technological changes that have led to upheavals in the lives of many people, the news media and assaults on the electoral process in the U.S. and Europe.

About the National Agenda class

In addition to the public events that bring nationally known speakers to campus, National Agenda also is a UD class that gives undergraduate students the opportunity to meet those speakers in classroom and informal discussions.

The 25 students, led by Hoffman, met shortly before the Biden-Kasich event in Hullihen Hall and discussed a variety of issues related to political divisions, bipartisanship and coverage of politics by the media.

The group gathered in the lobby of the building and greeted Biden and Kasich when they arrived together. Joined by Assanis, students asked a few questions of the two and posed for official photos and selfies.

After the program, students talked about the experience of meeting such well-known political figures and interacting with all the National Agenda speakers.

For most sessions, the speakers talk to students in their classroom, then have dinner with them on Main Street before the formal program begins.

“I feel like this is such a great learning experience, and it’s not like any other class I’ve ever had,” said Sarah Fritz, a senior majoring in political science and communication who is planning to attend law school. “We really get to talk to people—authors and politicians and all kinds of people—on a personal level.”

Katie Mazur, a junior also majoring in political science and communication who hopes to become a political reporter, called the class “unique.”

“I’m just so interested in politics, and it’s an amazing opportunity to meet the speakers one on one,” she said. “They come to our class and sit and talk, and then we can talk informally at dinner. It’s just a great experience.” 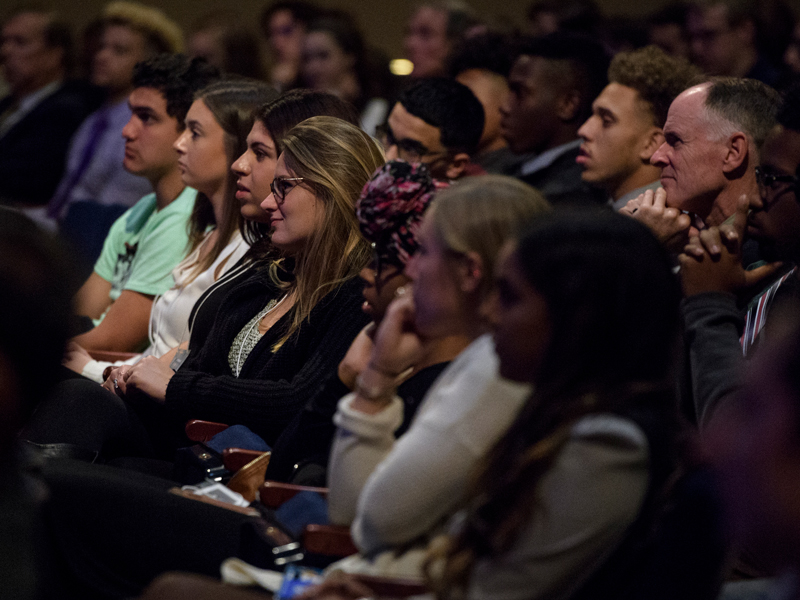 More about the speakers and the event

Joseph R. Biden Jr. was a U.S. senator from Delaware for 36 years, before serving in the Obama administration as the 47th vice president of the United States.

He is the founding chair of UD’s Biden Institute, housed in the College of Arts and Sciences’ School of Public Policy and Administration. The institute is a research and policy center, focusing on solutions to issues ranging from economic reform and environmental sustainability to civil rights, criminal justice, women’s rights and more.

Biden, a 1965 UD alumnus, has been awarded the Presidential Medal of Freedom, with Distinction, the highest civilian honor in the United States. His newest book, Promise Me, Dad, was recently released.

John Kasich served 18 years in the U.S. House of Representatives and was sworn in as Ohio's 69th governor in January 2011.

He is the author of most recently, Two Paths: America United or Divided, which reflects on his 2016 presidential campaign and hopes for America's future. As governor, Kasich has said his top priorities are to create jobs for Ohioans, reduce taxes and cut government spending.

Former Vice President Joe Biden (left), Ohio Gov. John Kasich and Lindsay Hoffman, who directs the National Agenda series and moderated the discussion, listen to a question from the audience at Mitchell Hall.

The National Agenda speaker series, sponsored by UD’s Center for Political Communication (CPC) and now in its seventh year, brings nationally known speakers to campus. This year’s theme, “As We Stand | Divided,” explores religious, political, cultural and other divides in the United States.

The Oct. 17 discussion was held at a special time and day in partnership with the University’s Biden Institute.

National Agenda, which is free and open to the public, continues on Nov. 1 and 15; more information is available at this website. National Agenda is made possible with support from the University of Delaware Office of the Provost.