The politics of fair trade

Fair trade certified coffee is the kind of phrase that sounds good on a Whole Foods shelf, the type of marketing that merges first world affluence with third world resource. For the average consumer, it implies fairness in labor and wealth, the idea that small producers profit directly from the products and goods they produce.

The reality is far more complex, says Lindsay Naylor, assistant professor of geography in the College of Earth, Ocean, and Environment whose paper, “Auditing the Subjects of Fair Trade: Coffee, Development, and Surveillance in Highland Chiapas,” was published in the January issue of Environment and Planning D: Society and Space.

In research that has taken her to the shade grown coffee plots of Mexico and the communities of indigenous Maya who work in them, she has discovered that this seemingly altruistic concept often has unforeseen impacts, and complex political origins.

In the southernmost Mexican state of Chiapas, for example, where fertile soils grow an estimated 60 percent of Mexico’s total coffee output, the coffee business benefits the Mayan community, but in some ways, also has them trapped.

“Fair trade has assisted families, but it’s also served as a security blanket with little mobility,” she says. “Coffee producers are marching in place.”

Labor prices have been raised only once since fair trade labels first originated in 1988, and most farmers make around $500-1,000 each year.

But the power of the crop also goes beyond profits and pay, becoming at times a political weapon.

As an example, Naylor points to the 1997 Massacre of Acteal, in which 45 men, women and children participating in a Catholic Mass for peace were slaughtered.

“Their pacifist response to violence was to create a coffee cooperative,” she says of their Maya Vinic coffee. “Truly rising from the ashes. That's what makes the fair trade movement so fascinating.”

Naylor is one of the foremost scholars on the topic, having previously published, “Some are More Fair than Others: Fair Trade Certification, Development, and North-South Subjects,” in the 2014 issue of Agriculture and Human Values. She was also quoted in a Yes Magazine article on “How to Become a Citizen Eater: A Trip Behind the Labels of Your Ethnic Cup of Coffee.” 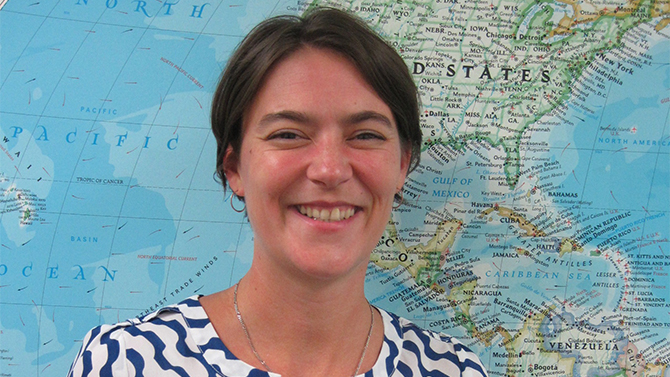 Lindsay Naylor, assistant professor in the College of Earth, Ocean, and Environment.