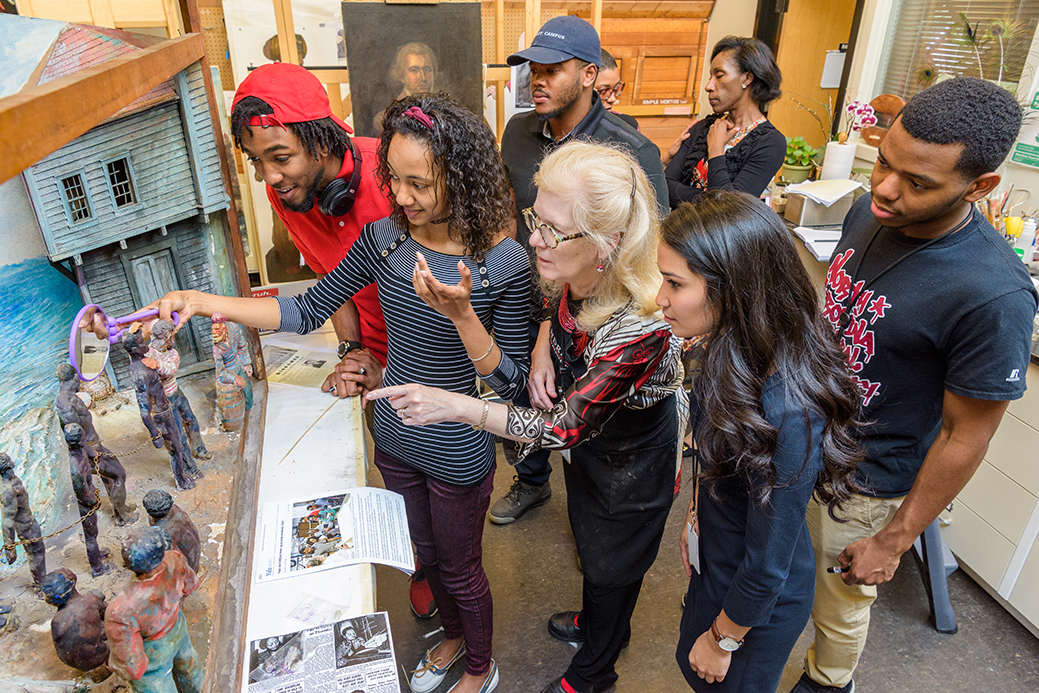 Joyce Hill Stoner (front center) and students discuss the diorama they are working to repair. 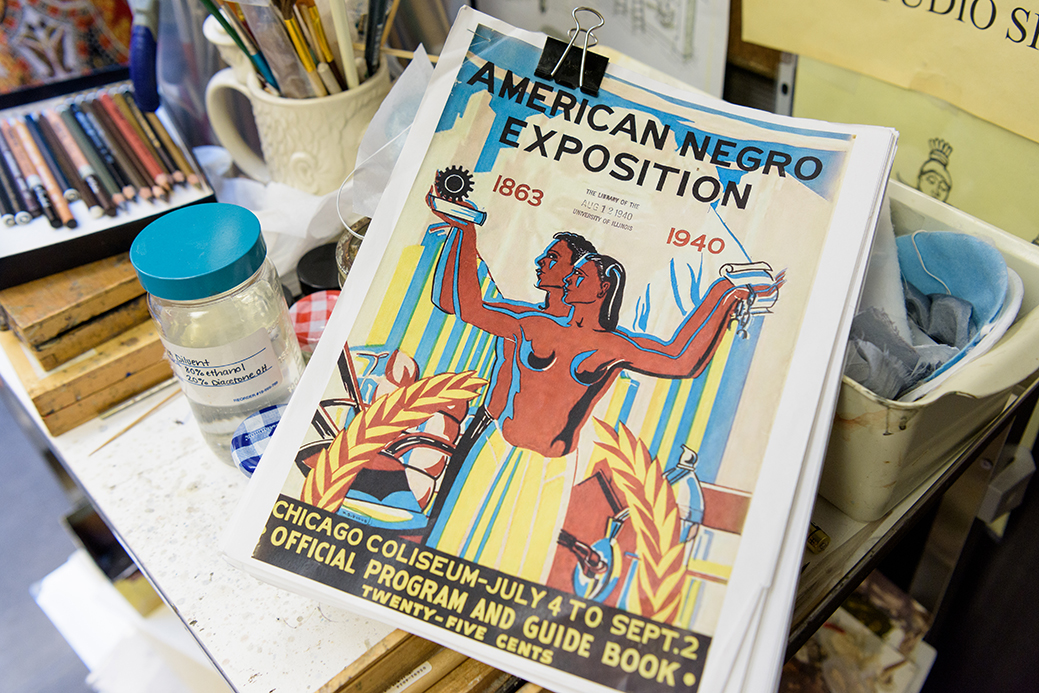 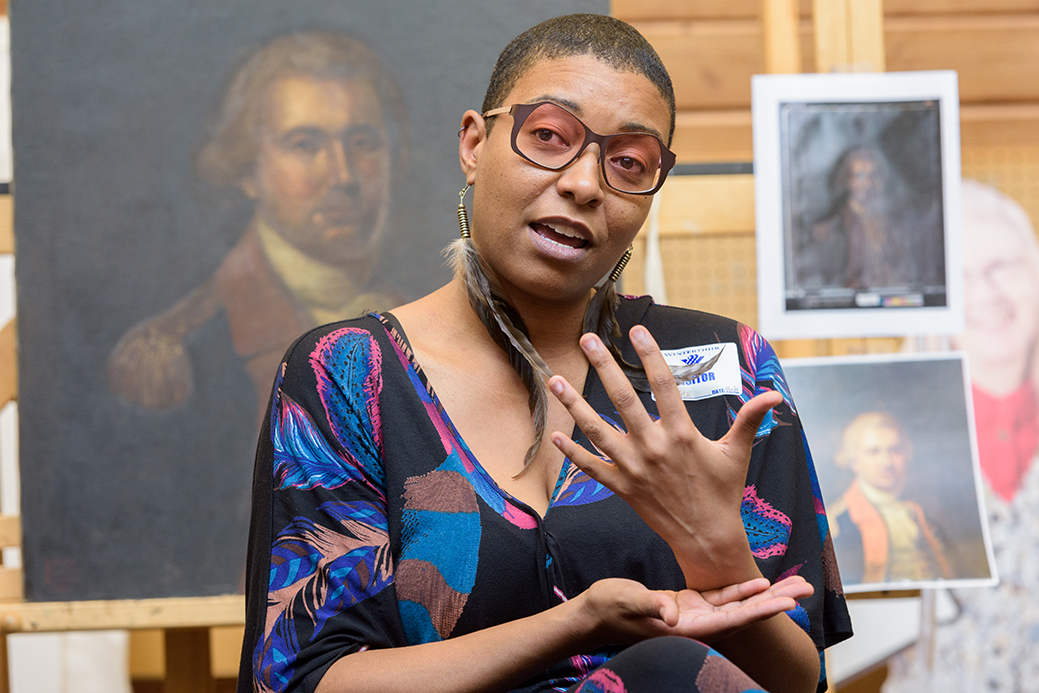 Kelli Morgan, a curatorial fellow at the Pennsylvania Academy of the Fine Arts, speaks to students in the summer conservation program. 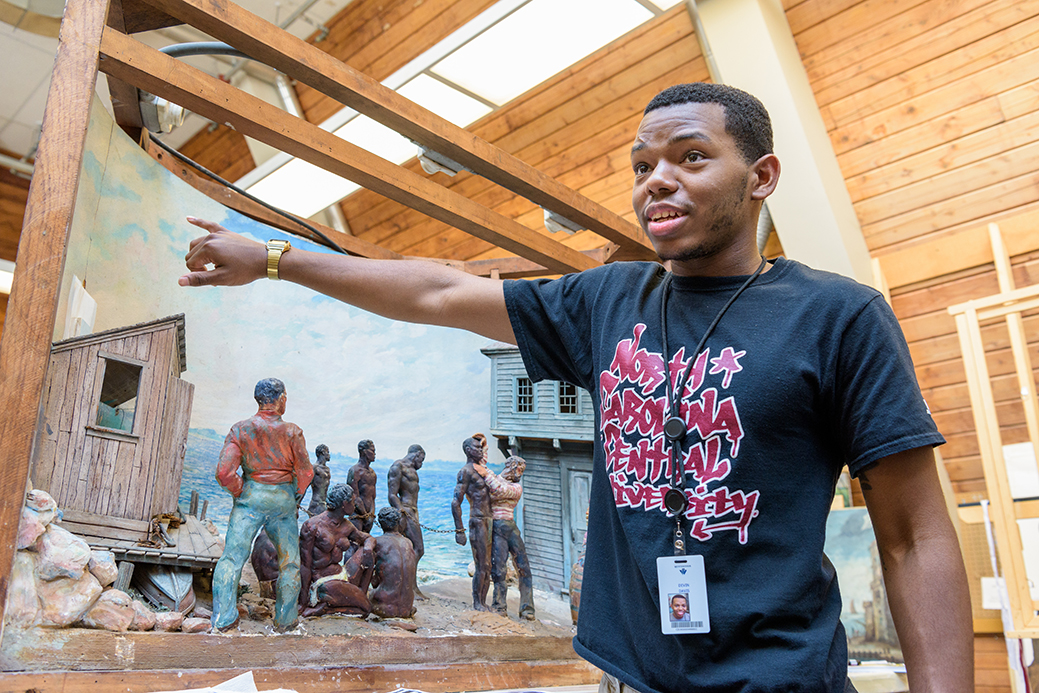 Devin Davis points out the diorama's background, showing the improved appearance of the area the students have cleaned. 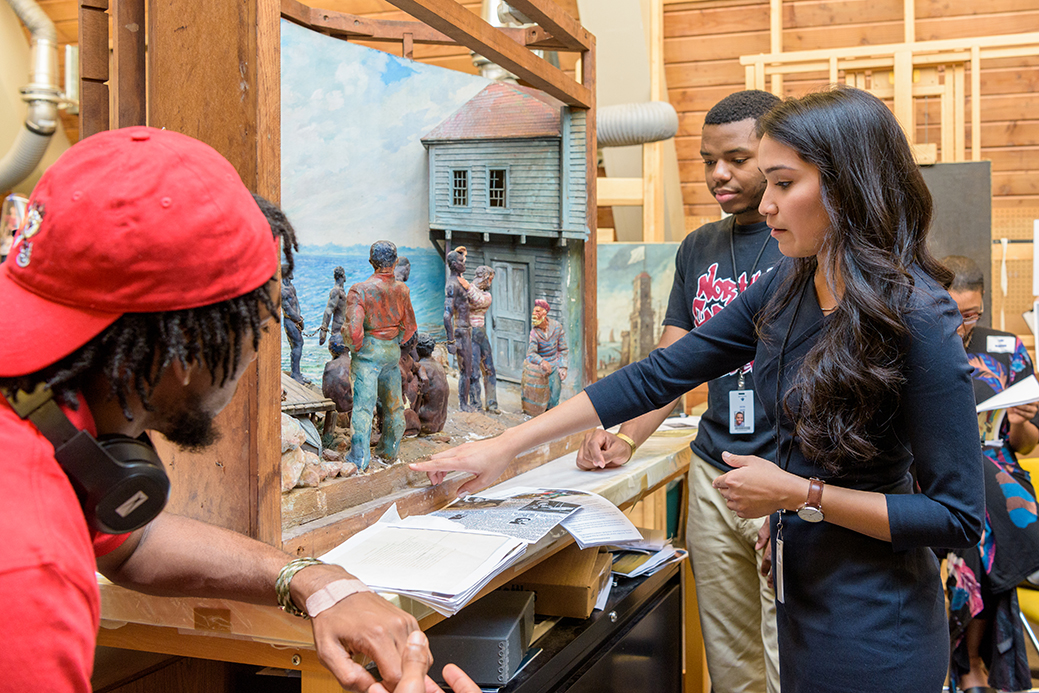 Examining a section of the diorama's lower frame are (from left) Matthew Fields, Devin Davis and UD's Julianna Ly. 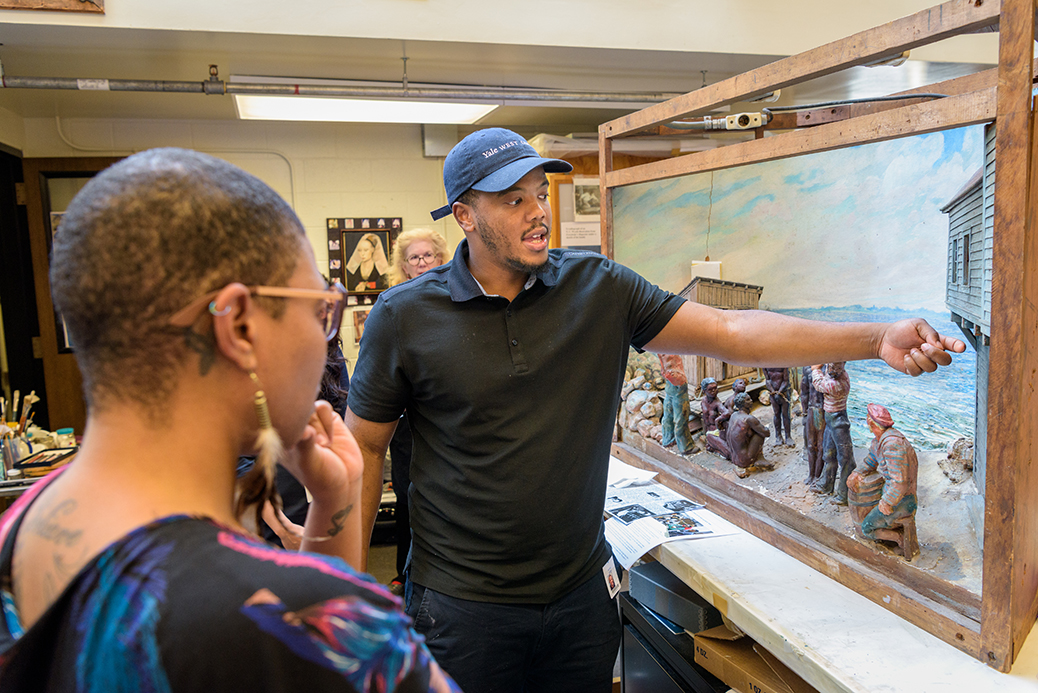 Michael Ewing, a graduate of Fisk University who works in the gallery there, explains some of the research he has conducted on the materials making up the diorama. 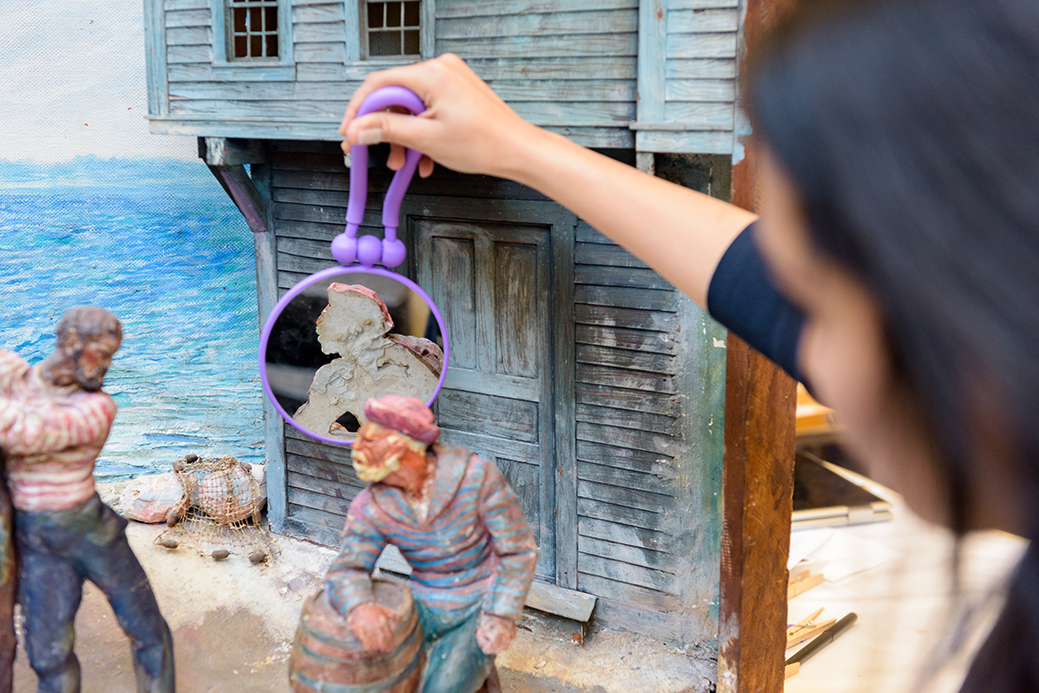 Julianna Ly holds a hand mirror so students can examine the back of the figures in the diorama. 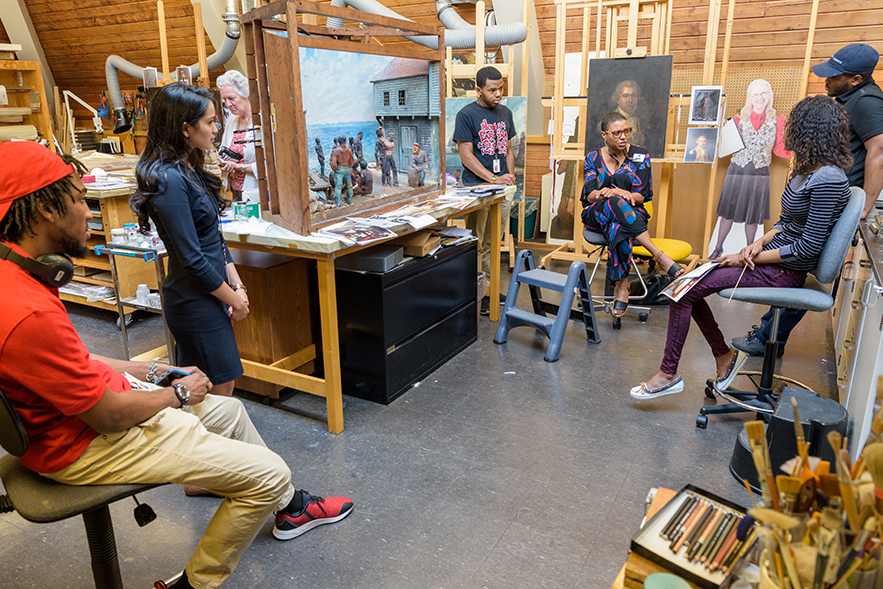 The group discusses the historical context of the 1940 Chicago exposition.

As artists themselves, students Devin Davis and Matthew Fields have visited a lot of museums, but they never thought about the professionals working behind the scenes in conservation.

That changed this summer when they were among 11 students from historically black colleges and universities (HBCUs) taking part in a special program designed to introduce them to art conservation and perhaps whet their interest in pursuing graduate studies in that field. The program is a partnership involving the Alliance of HBCU Museums and Galleries, the University of Delaware and Yale University.

“I’m an artist, but I had no real idea that this [profession] existed,” said Fields, a sophomore at the University of Arkansas. “I wanted to attend this program because I want to learn everything I can about every aspect of art.”

Davis, a junior art student at North Carolina Central University who, like Fields, has been planning to pursue a master of fine arts degree after graduation, said he also was unfamiliar with the field of conservation before joining the summer program.

“You go to museums, but you never know about something like this,” he said of the specific artistic and scientific techniques, as well as the painstaking attention to detail, that conservators bring to their work. “When opportunities like this program come along, where you can really learn something new, I try to take part whenever I can.”

The 11 students selected for the competitive program began by spending a week at Yale in early June, where they got an overview of conservation.

Four members of the group then came to the University of Delaware’s “Two-week Introduction to Practical Conservation” program, where they studied and worked with faculty member Joyce Hill Stoner and UD alumna and graduate student Julianna Ly in the conservation labs at Winterthur Museum

Their efforts focused on a 5-foot diorama, created for the 1940 “American Negro Exposition” in Chicago and now owned by Tuskegee University, that was in need of significant conservation work. Stoner took on the project as a learning experience for students at no cost to Tuskegee.

Depicting the arrival of the first enslaved Africans in Virginia in 1619, the diorama includes figures of people, five of them attached to one another by a chain, and the ship on which they were brought to America. When the piece got to Delaware, its curved hardboard background was marred by a large vertical crack, and the paint was dirty and darkened; the ship’s rigging — intricate tangles of what looked like brown cotton thread — was sagging and torn.

Near the end of the students’ two weeks of work, the crack had been glued and clamped closed, the figures of the people were stabilized and the rigging was in the process of being reconstructed. Sitting near the diorama in the conservation workroom, a large glass jar filled with dirty swabs indicated how much cleaning had been needed to reveal the original blue sky and white clouds painted on the background of the piece.

“There were originally 33 dioramas created for the exposition, 13 are lost, and Tuskegee has 20, including this one, and they’re all in need of repair,” said Stoner, who is the Edward F. and Elizabeth Goodman Rosenberg Professor in Material Culture and director of UD’s doctoral program in preservation studies. “We hope the work we’re doing on this is just the beginning.”

A key goal of the summer program is to improve diversity in the field of conservation, Stoner said. According to research by the Andrew W. Mellon Foundation, only 1.5 percent of cultural-heritage professionals nationwide are African American.

By giving promising students a close-up view of conservation work, the program hopes to pique their interest in a possible career in that field or a related one.

“We’re trying to give them an overview of all the aspects of conservation,” Stoner said. “It’s a field that many people have never heard of, but the skills you learn are very useful. It’s widely applicable if you give it a chance.”

Student Taryn Nurse, a Fisk University junior studying biology, chemistry and art, said she’s learned from the program that conservation in many ways “is perfect for me — you do chemistry and you do art.” Until now, her career interests have been focused on medical illustration, but she said she may reconsider.

In addition to the hands-on work at Winterthur, the students conducted research, on the diorama’s materials and on its history, and wrote and presented reports about their findings. Next, UD conservators and students will complete the treatment of the diorama and prepare it to be shipped safely back to Tuskegee.

Dioramas for the 1940 exposition in Chicago, which celebrated the 75th anniversary of the end of slavery in the U.S., were created by 70 African American artists, although very little is known about most of those artists.

The dioramas depict various scenes from throughout history of African people and those of African descent, spanning ancient Egypt through World War I.

The diorama that was the focus of the students in Delaware is titled “Arrival of the Slaves in Jamestown in 1619,” although recent research indicates the arrival was in nearby Point Comfort (now Fort Monroe), Virginia, not Jamestown.