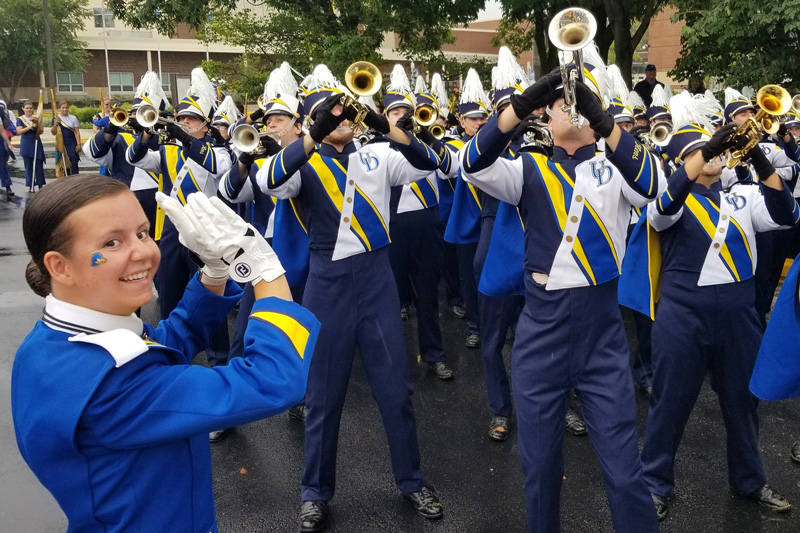 Catie Preszler, a senior majoring in music education, helps guide the marching band. The band will be featured in the Philadelphia Thanksgiving Day Parade. 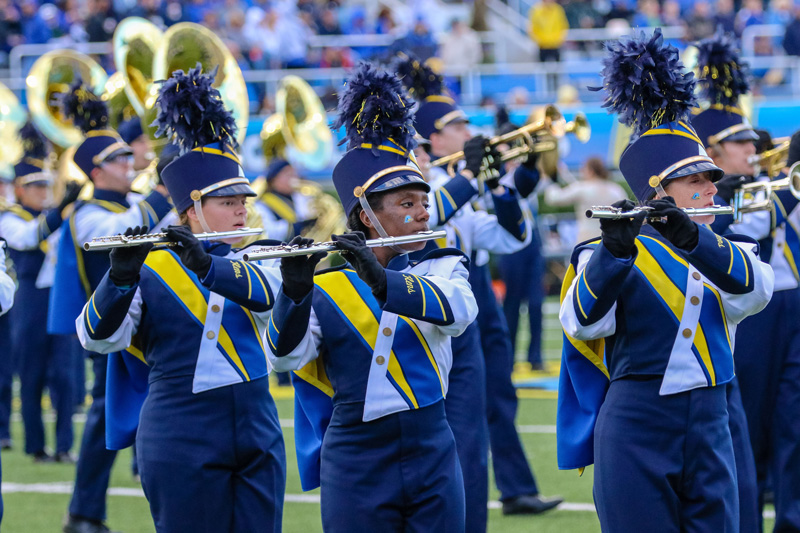 The UD Marching Band has about 300 members, the vast majority of whom are not music majors. At last count, the band represented all seven UD colleges and some 90 different majors. 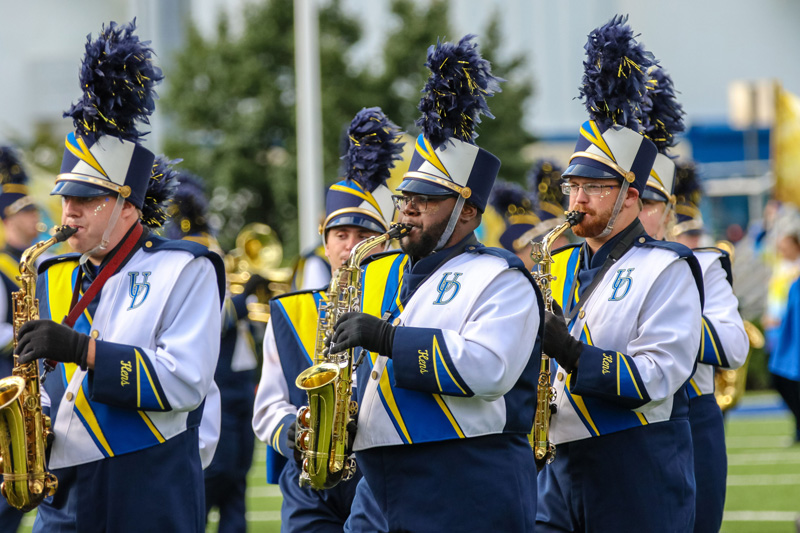 The UD Marching Band has been looking forward to appearing in the Philadelphia Thanksgiving Day Parade since receiving the invitation in January. 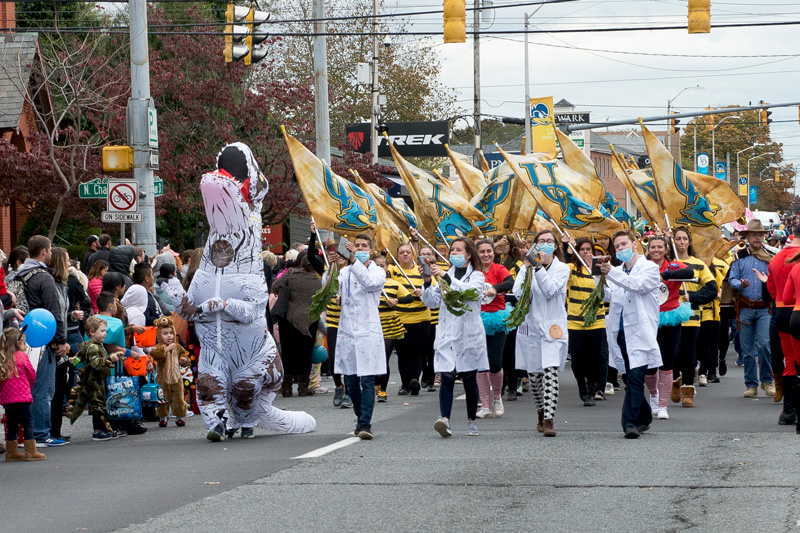 The UD Marching Band appears at halftime of home football games, but the band also performed at the 2018 Newark Halloween Parade - in appropriate attire.

Editor's note: The University of Delaware Marching Band performed on Thursday, Nov. 22 in the Philadelphia Thanksgiving Day Parade. This story, published on Nov. 14, explains how the band got there.

The invitation came in January: Would the University of Delaware Marching Band (UDMB) like to participate in the 2018 Philadelphia Thanksgiving Day parade, the oldest in the nation?

Oh, and would they like to be the featured band, performing a full drill routine at the iconic steps of the Philadelphia Museum of Art for large in-person and television audiences?

Of course, they said yes.

“Being the featured band means we get three minutes of TV time of us marching and performing, not just 10-15 seconds of marching,” said Heidi I. Sarver, UDMB director and professor of music. “That’s what makes this special. It’s great exposure for the band and for the University.”

WPVI-TV (Channel 6 ABC) will broadcast the parade from 8:30 a.m. to noon on Thanksgiving Day, Thursday, Nov. 22, with the UDMB expected to perform around 10:45 a.m. The band’s show will feature music with a holiday theme. But before that, the marching band is scheduled to appear on ABC’s Good Morning America with Ginger Zee at 7:18 a.m.

This year’s event, sponsored by WPVI and Dunkin’ Donuts, is the 99th consecutive Thanksgiving Day parade in Philadelphia.

For the 300-plus students who are members of the UDMB — including musicians, the color guard and baton twirlers — the parade will be an exceptional opportunity for a different kind of Thanksgiving holiday. Many said they’ve been eagerly anticipating the event for almost a year.

“I was very excited to learn that we had been invited to be a part of the parade,” said Meg Tobey, a senior who plays clarinet and is majoring in criminal justice. “As soon as I heard the news, I was texting my parents and my friends telling them all about it. This is a once-in-a-lifetime opportunity, and I am thrilled to be a part of it, especially because it’s my last year at UD.”

Like other band members, Tobey has added rehearsals for the parade to the UDMB’s regular schedule of practices for football halftime shows. It’s a busy schedule, and Thanksgiving week, when most University students are on their fall break, will remain busy for the band.

UDMB will travel to Philadelphia the morning before Thanksgiving to practice at the Art Museum staging area. On the day of the parade, band members will leave their hotel early in the morning to prepare for the 1.4-mile march along Benjamin Franklin Parkway and their featured performance.

Students will head home or back to campus around noon, some in time for traditional family celebrations.

“I hope I make it back to Newark in time to go to family dinner in Wilmington,” said Evan Mullen, a junior trumpet player who is majoring in nursing and who said he grew up watching the parade on TV and is thrilled to be part of it. “Even if I don’t, and even waking up early, it will be worth it to perform in the parade. It’s almost like a childhood dream for me.”

Madisyn Steinberg, a junior marketing major who plays the mellophone and is the student band manager, agrees.

“I’ll probably be celebrating Thanksgiving the traditional way for the rest of my life, so I’m excited to celebrate this year in such a memorable, unique way,” she said.

More about the UD Marching Band

Averaging about 300 members a year, the band’s primarily role is to support the football program, but its activities aren’t limited to halftime performances at home games.

Each year, students dress in costume and march in the Newark Halloween Parade. The band also hosts and performs at the annual Bands of America Mid-Atlantic Regional Championship and takes part in the Collegiate Marching Band Festival in Allentown, Pennsylvania, each fall.

Those regional events allow the band to engage with the community and help showcase it and UD to prospective students, Sarver said.

Incoming students audition for the UDMB and, once selected, take part in three rehearsals a week during fall semester, as well as the football and other performances. Sarver is assisted by James Ancona, assistant director and assistant professor of music.

The great majority of band members are not majoring in music. Sarver said members represent all of UD’s colleges and — at the most recent count — some 90 different majors. They receive one academic credit for their participation in UDMB.

Students often refer to the band as a close-knit group, with many continuing as members for all four years of their college careers.

“To me, UDMB is family,” Mullen said. “Coming in as a freshman, it’s the quickest way to earn 300-plus friends on campus before classes even start.”

Sarver summed up the experience for students: “They work ridiculously hard. And they have a blast.”

For those fans who can’t wait until Thanksgiving Day to see the performance, the band will give a preview during halftime of UD’s football game against Villanova on Saturday, Nov. 17 at Delaware Stadium. The game is scheduled to begin at noon.