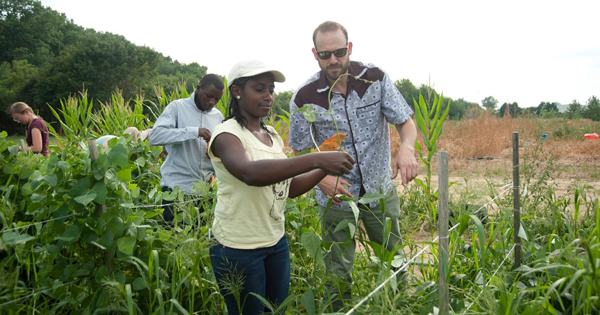 Susan Gachara has studied maize lethal necrosis with Randy Wisser, associate professor of plant genetics, during her time as a Borel Fellow. 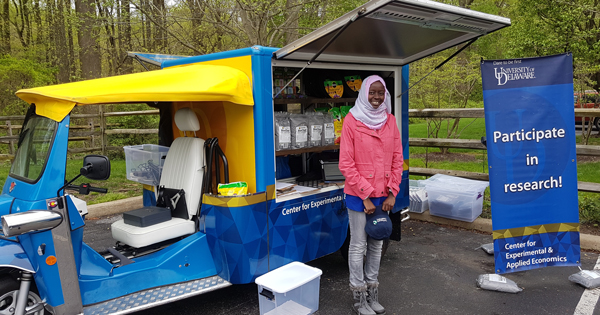 Mariam Gharib has worked with Leah Palm-Forster, assistant professor in the Department of Applied Economics and Statistics, studying agricultural and resource economics during her time as a Borel Fellows.

One is studying crop disease, the other agricultural economics

As Borel Global Fellows, Susan Gachara and Mariam Gharib have had the opportunity to gain valuable hands on experience studying agricultural problems afflicting their home country of Kenya which has equipped them with the tools needed to help solve those issues when they return to Africa.

The Borel Global Fellows program is a partnership between UD’s College of Agriculture and Natural Resources and the Alliance for a Green Revolution (AGRA) in Africa to build a Master’s degree program to train African students in plant breeding, crop protection, soil science, agricultural economics, and other areas vital to food security in Africa.

Made possible by a generous gift from Jim and Marcia Borel, the program provides opportunities for one to two students per year to complete a Master’s degree at the UD while conducting research in their home country in an area of critical need.

Gachara works with Randy Wisser, associate professor of plant genetics, and conducts research based on developing a diagnostic tool for plants infected with maize lethal necrosis disease, a disease caused by a combination of two viruses that is prevalent in many parts of Kenya and neighboring countries.

Gachara has a background in environmental science but when she took a class on environmental biotechnology, she was amazed at how genes could be incorporated from different plants.

“It was a new whole world for me and so I was like, ‘Moving forward, I would like to be involved in agriculture instead of the environment.’ Plus, I grew up on a farm so it was natural. My dad taught me everything to do with farm,” said Gachara who added that plant diseases were a big problem in the farming communities’ activities.

“Every time there was a new disease, we could not get very high yields,” Gachara said. “It wasn’t only us but the whole community and the whole country so I just wanted to be more involved and understand what exactly happens and the underlying mechanisms of how plants can defend themselves and what can we do to help the situation.”

Having arrived at UD in August 2016, Gachara will stay on for one more year and said that she has enjoyed her time at the university.

“It’s impressive,” said Gachara. “It’s resourceful and that’s a very big plus for me as I’m trying to navigate the scientific field and the people are very nice, very friendly. That’s a major concern because I’m far from home and I need somewhere I can call a home and people I can take as my family so it has been my home and I have enjoyed the stay.”

She also said that it has been great working with Wisser.

“He’s well versed with genetics and in the plant science world and he’s also aware of the agriculture situation in Kenya because he has worked on research there,” said Gachara. “I’m glad he took a chance on me. I was just so passionate about agriculture and I didn’t do it in my undergraduate and I said, ‘I hope someone can take a chance on me and believe that my passion will not fail me.’ I would also just like to thank the Borels for funding the program and I will forever be in debt to them and hopefully I can do something similar to someone in the future.”

Gharib has worked with Leah Palm-Forster, assistant professor in the Department of Applied Economics and Statistics, studying agricultural and resource economics, which is a continuation of what she had been studying as an undergraduate.

“I come from an area where we have good environmental conditions,” Gharib said, “but most of the people there don’t practice agriculture so I wanted to study something which would make a difference and I thought if I study agricultural economics, I’d be able to go back home and educate people, motivate them and show them they have a good environment and this is what they should do. I want to encourage them to practice more agriculture so they can improve their livelihood by earning money because they have those conducive conditions for farming.”

Gharib said that when she gets back to Kenya, she will do a six-month internship while she works on her research.

“My plan is to go back home and look for a job, gain some more knowledge and then identify a few research ideas and go ahead and do a Ph.D.,” Gharib said. “Most of the time, you can only make a big difference if you’re on a higher level involved policy making. My main goal is to be involved in conducting research which will influence policies.”

As for her favorite part of being a Borel Fellow, Gharib said that she has enjoyed all the classes she’s taken.

“I didn’t expect that I would enjoy classes that much because most of the time what I get to do is an application of what I’m learning in real life situations. It’s not just reading books and theories,” said Gharib. “Here you get to actually practice it so you’re able to get skills at the same time so it’s something that I can use when I go back to Kenya—[especially] if I work in a research lab. Also, people here are very welcoming. You don’t feel like you’re far from home. It’s like you just fit in completely.”