The social and civil rights activism of the 19th century, represented by one of its most prominent and tireless advocates, met 21st century technology at a Feb. 14 event celebrating the 200th birthday of Frederick Douglass.

Frederick Douglass Day was marked by a global “transcribe-a-thon,” in which some 1,600 participants at more than 60 locations in North America and Europe helped to transfer historical records to a digital, searchable database for preservation and for use by historians and the public. A volunteer transcriber helps record in a digital format handwritten documents from the Freedmen's Bureau, the agency Congress established after the Civil War to help formerly enslaved people and others whose lives were dependent on the economic system of slavery transition to freedom.

“What an honor it is to join all of you … to celebrate the life of Frederick Douglass and to pledge our commitment to the work he left us to do,” said P. Gabrielle Foreman in welcoming participants to the occasion at the University of Delaware, one of three central hubs for this year’s event. “We honor not just Frederick Douglass but the many movements for justice” with which he was involved.

Foreman is Ned B. Allen Professor of English and professor of Africana studies and history at UD and faculty director and co-founder of the Colored Conventions Project (CCP), a nationally recognized digital history project hosted at the University.

At UD, where students, faculty, staff and community members gathered in Morris Library, the event featured dance, poetry, song, readings and a birthday cake in addition to the efforts of dozens of volunteers who used laptops to transcribe records from mostly handwritten documents. Volunteer transcribers at the numerous sites worked to digitally preserve documents from the Freedmen’s Bureau, the agency that Congress established after the Civil War to help formerly enslaved people and others whose lives were dependent on the economic system of slavery transition to freedom.

The transcribe-a-thon was held in collaboration with the National Museum of African American History and Culture, which houses these historically significant documents, and the Smithsonian Transcription Center.

By the end of the international Frederick Douglass Day events, the transcription center reported, 779 additional pages of records had been transcribed, another 402 pages of transcriptions had been reviewed and approved, and 600 new volunteers had registered to help with the initiative. Discussing the project with a volunteer is P. Gabrielle Foreman (left), the Ned B. Allen Professor of English and professor of Africana studies and history at UD and faculty director and co-founder of the Colored Conventions Project (CCP), a nationally recognized digital history project hosted at the University.

Those attending the UD event were given a brief tutorial on the transcription process and then went to work. Students involved with the CCP circulated throughout the room to assist the volunteers.

Miata Smith, an undergraduate neuroscience student, said she initially came to Douglass Day to see the dance performance by students in the “Women of Consequence” project.

“But I wanted to know more about this project, too,” she said, as she worked to decipher the handwriting in a letter and type it into the digital record. “It’s fascinating to see these documents.”

For Marva King, a retired Environmental Protection Agency executive who earned her master’s degree in public administration at UD in 1997 and a doctorate at George Mason University, the event was her first try at working with the transcription process. Parties, including transcription parties, are better with cake. In this case, it was for the 200th birthday of Frederick Douglass.

“I thought the project sounded interesting,” she said, after learning about it from Foreman. “So many records are lost, and so many African Americans have difficulty learning anything about their ancestors, after the years of slavery and Jim Crow, that preserving the records we have is really important.”

CCP has brought together undergraduate and graduate students from across the University, along with faculty members, archivists, library professionals, classroom teachers, community groups and churches. All share an interest in preserving historical records, particularly those that have often been overlooked.

Alison Robinson, a student in UD’s master’s degree program in material culture studies, said she first learned about CCP in September and “fell in love with it.”

“This particular project is trying to remind the world of how important history is, and how relevant it is to our world today,” she said. Working with documents that show the effect of historical events and times on everyday individuals, she said, is especially compelling. Interim Provost Robin Morgan (left) and College of Arts and Sciences Dean George Watson joined volunteers at UD's Frederick Douglass Day events. The international event, the transcription center reported, 779 additional pages of records had been transcribed, another 402 pages of transcriptions had been reviewed and approved, and 600 new volunteers had registered to help with the initiative.

“With this project, you really hear the voices directly—voices of African Americans and of people who interacted with them,” she said of the Freedmen’s Bureau documents. “You see the power of local-level history, and you see the personal impact. And that’s exciting.”

More about the Colored Conventions Project

The CCP is a collaborative, digital project that is a key part of UD’s ongoing initiatives to build on its established strengths in the public humanities, particularly African American public humanities, and material culture studies.

The University of Delaware Library is a key partner in the interdisciplinary project.

The initiative resurrects buried digital history by finding, digitizing, archiving and making publicly available the minutes and other records from the numerous Colored Conventions that met across the United States and Canada in the 19th century.

African American men and women, including such prominent leaders as Douglass, gathered at these conventions to strategize about ways to achieve political, social and legal justice.

The project has involved research, classroom experiences and community engagement by both graduate and undergraduate students in such fields of study as history, Africana studies and English.

The CCP has won numerous awards for its work. In October, the National Endowment for the Humanities highlighted it as one of 50 projects selected for recognition in the agency’s “NEH Essentials” list of important work it has supported in its 52-year history.

To Foreman, sponsoring Frederick Douglass Day was a natural fit for CCP.

“One of the Colored Conventions Project’s central values is to adopt and advance the community-building that the conventions themselves modeled,” she said. “The records of people and movements that have been dismissed and undervalued, and so lost and unarchived, are often only recovered through collective, community-sourced commitment.” 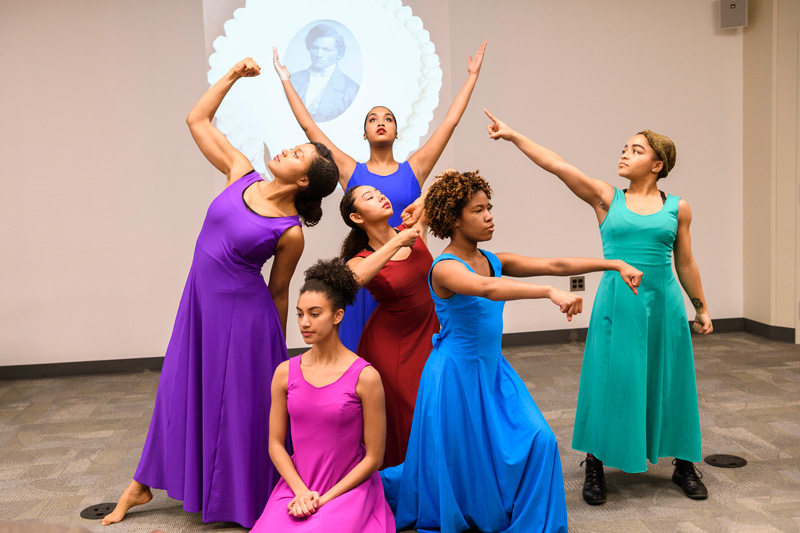 With an image of Frederick Douglass in the background, dancers added a different artistic element to the transcribe-a-thon.