Putting smart weapons to the test

In the old days, a slingshot, BB gun, rifle or cannon was only as smart as the marksman taking aim.

Now, many weapons are guided to their targets with the precision of infrared sensors and lasers.

The technology continues to advance, but testing technology has lagged behind, leaving new generations of weapons and their tactical advantages unavailable to today's troops.

Closing the gap between infrared sensor technology and testing technology was the challenge accepted by Chip Design Systems (CDS), a business founded by University of Delaware Prof. Fouad Kiamilev (electrical and computer engineering), who had some smart weapons of his own: a lab packed with sharp, young researchers and a team of expert collaborators.

Kiamilev, CDS Research Engineer Rodney McGee and collaborators from the University of Iowa, Firefly Photonics, ON Semiconductor and Teledyne Scientific now have patented technology for a new testing device that matches the advanced capability of infrared sensors.

This diagram, courtesy of the Air Force Research Laboratory, shows how the technology developed by Chip Design Systems, the University of Delaware and the University of Iowa will be used in a laboratory to evaluate how infrared guided missiles will perform during flight.

Infrared sensors are used to detect objects that emit heat or reflect infrared light, which is not visible to the naked eye. These sensors capture data and provide essential information even in dark or foggy conditions and can detect humans and other objects behind doors or walls.

A new generation of sensors can detect smaller, faster targets, even in complex backgrounds.

Working with the Air Force Research Laboratory, CDS has designed a new short-wave infrared LED (light-emitting diode) projector to test those new sensors. The projector produces infrared scenes with unprecedented resolution, double the speed and much higher brightness than existing technology. Its circuits allow each pixel to be programmed.

A prototype with the new technology - called the Night Glow Short Wave Infrared LED Image Projector (or NSLEDS, for short) - has been used for hundreds of hours already in evaluation at Eglin Air Force Base in Florida. It has proven the work is going in the right direction, according to Ron Rapp, senior research engineer with the Air Force Research Laboratory at Eglin AFB.

"This 1 megapixel prototype has exceeded expectations during beta testing at AFRL," Rapp said. "This gave us the confidence that we could do it. The next generation coming down the pike is going to be HD [high definition] and we're going to need a 4 megapixel projector. That will get us at least 5-10 years of capability." 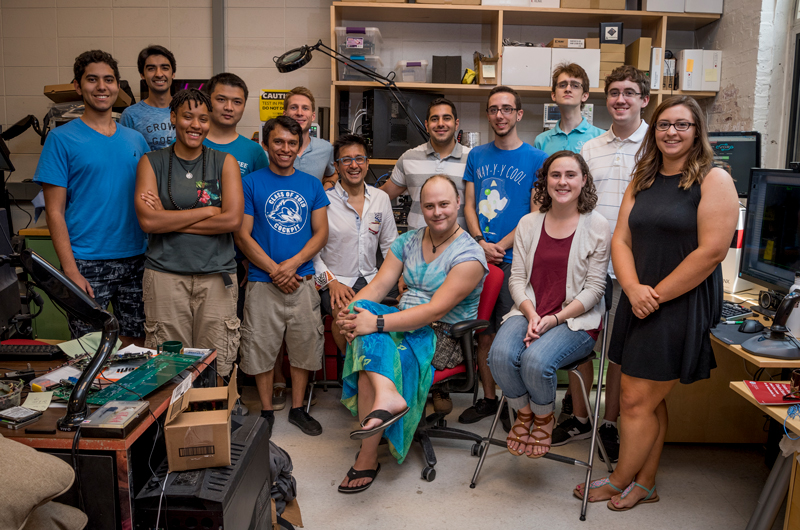 About 30 people were involved in development of the successful prototype, and CDS now has a contract to develop that 4 megapixel infrared projector.

"This successful collaboration between the Air Force Research Laboratory, small business and academia is a visible example of how the SBIR/STTR program works," Rapp said.

The infusion of government support allows for development of new technology, a costly enterprise that otherwise would be far beyond the reach of a small-but-innovative company such as CDS, Kiamilev said.

"It's hard to get a venture capitalist to fund a 10-year study," said Kiamilev, who joined UD's faculty in 1999. "And I'm thankful for an environment in our department and the University as a whole that enables faculty and students to take their ideas beyond programs and into projects. Our department has a rich history of commercialization."

As is often the case in research and development, there have been many setbacks and advances along the way, Kiamilev said.

"It requires a bunch of Ph.D.s to make it," he said with a smile. "And they break 10 things before they succeed. You need a small, agile group - and that's where we come in. That's where licensing comes in."

UD's Office of Economic Innovation and Partnerships (OEIP) worked closely with Kiamilev and CDS to license the technology and make it available to the Air Force.

"One of OEIP's roles is to encourage and promote faculty entrepreneurship by facilitating the licensing process to get deals done quickly," said Brad Yops, assistant director of OEIP.

“CDS and OEIP were natural partners given their shared values and their mutual interest in developing this technology," said Chandra Kiamilev, legal counsel for CDS. "The process throughout was collaborative and a 'win-win' for both sides."

And now the products of solid research can be put to good use.

"By forming a small business, now the government views us as not just a group making things in a lab, but as a group who can bring them the solution," Prof. Kiamilev said. "So they're sending us new research.

"We didn't do this to make a lot of money," he said. "We did what we did to get our research from where it sits as a record in some database to where it's actually being used. The first stop is a military user, but we're aiming for consumer-grade stuff."

The existing technology is about 20 years old and showing its age, Kiamilev said. It uses microresistor arrays and cannot achieve the brightness or efficiency of LEDs. Infrared LEDs, which are common to such things as remote control devices and night-vision goggles, are much cooler.

"This is a quantum leap in technological level," said Andrea Waite, a doctoral student in electrical engineering who has been an integral part of the project.

Sustainability is central to Kiamilev's broader research objectives. He and Prof. Willett Kempton developed the V2G (vehicle-to-grid) electric vehicle technology that allows vehicle owners to send and receive  energy from their vehicles to the electric grid, reducing costs and increasing energy supplies. That technology now is spreading around the world.

"I chose to focus on these two projects," he said "There is a high chance they might make an important impact."

He and his students also participate in the University's VIP program - Vertically Integrated Projects - in which collaborative teams of undergrads, graduate students, post-docs and faculty work together to address problems.

His CVORG lab in Evans Hall includes eight professional staff, 12 doctoral students, six master's students and more than a dozen undergraduate students in electrical and computer engineering. They call themselves CVORGIANS - though the acronym (CMOS VLSI Optimization Research Group) covers only a small portion of the group's projects - and many have tackled pieces of this Air Force project.

Doctoral student Tyler Browning, for example, has been working on getting data and video onto the projector. Miguel Hernandez, another doctoral student, has been testing the chip and working to code pixels.

The new projector could save the military millions of dollars in materials and hours.

"Instead of flying an actual jet - spending man hours and fuel - you can do the same test in the lab," said Waite.

Kiamilev said the project needs two or three more years of refinement by his small-but-focused team.

"We're a lean, mean organization," he said. "If a $6 billion enterprise wants to take you over - well, large organizations are so set in their ways. We just want to innovate."

And there is much more room for innovation.

Rapp said a 16 megapixel projector will be on the drawing board sometime in the future and there is strong interest in developing infrared O-LEDs - LEDS made of carbon - but that technology is not ready. When it is, he said, a wall can become your TV.

"It's cool stuff," he said, "and working with academics is really a breath of fresh air. They don't know what they can't do. And if you don't know what you can't do, you might just do it."