Building the future with biopharmaceuticals

It seemed like a pipe dream to Kelvin Lee, Gore Professor of Chemical and Biomolecular Engineering - this idea that the University of Delaware might find room for a place where innovation in biopharmaceuticals could happen. He wished for 60,000 square feet of space. But how could that work? 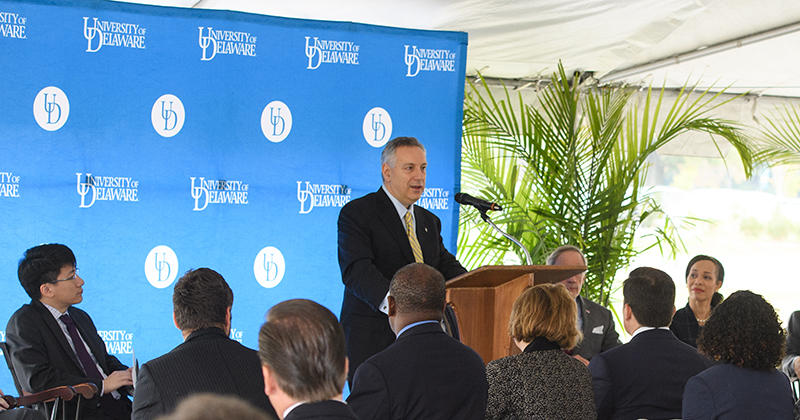 Monday, the dream Lee once thought too expensive and too ambitious was taking shape in striking fashion, as 14 symbolic shovels plunged into a symbolic mound of dirt on UD's Science Technology and Advanced Research (STAR) Campus, the ceremonial start of construction on a six-story, $156 million Biopharmaceutical Innovation Building.

It will be a gateway, University officials hope, to a major role for Delaware in the emerging biopharmaceutical sector, where scientists and innovators will tackle some of the world's most vexing diseases - Alzheimer's, Parkinson's, diabetes, cancer, to name a few - and help to train a world-class workforce. 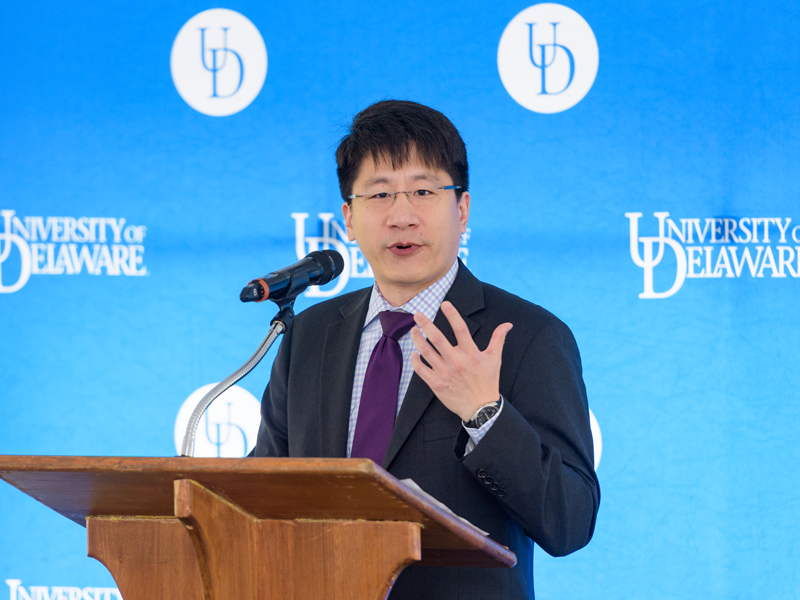 Kelvin Lee is the Gore Professor of Chemical Engineer, director of the Chemical and Biomolecular Engineering Institute, and director of NIIMBL.

The Delaware Biotechnology Institute will relocate faculty, staff and three facilities to the new building - bio-imaging, bio-informatics and sequencing - and related UD-led life science research and technology programs will be housed there, too. Opening day is projected for January 2020.

It is another beginning on a 272-acre site that once was a gloomy symbol of economic despair in Delaware, where bulldozers razed the shuttered Chrysler automobile plant in 2009, ending more than 50 years of manufacturing. Combined with UD's recent partnership with the DuPont Company and the state in launching Delaware Innovation Space Inc. at DuPont's Experimental Station, it brings fresh hope to a state where 1,700 scientists were laid off last year.

With the sound of trucks, cranes and construction workers at full throttle in the adjacent 10-story STAR Tower, which will hold much new territory for the University's work in health sciences, a delighted Assanis put it all into context at a brief ceremony marking the new milestone.

"The STAR Campus was truly a field of dreams," Assanis said, "a blank canvas on which we started painting the future of our University and our state. We wanted this to be a place where our strengths in teaching and research would intersect with the needs of our community and the world, where faculty and students and staff would work with innovators and entrepreneurs from throughout the region."

To put some of the nation's top innovators and scientists under one roof and nurture a growing community focused on finding cures and improving treatments has powerful potential for medicine and for industry in Delaware and the region. 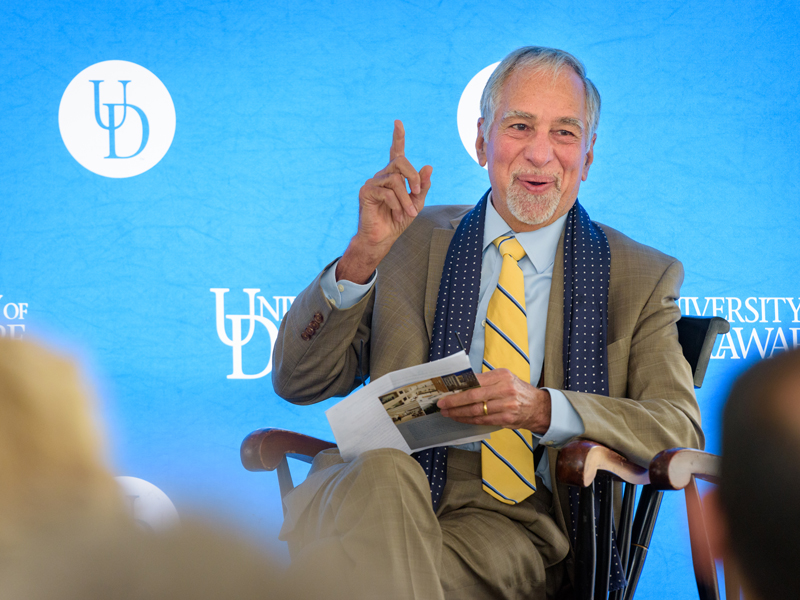 Phillip Singerman is associate director of the National Institute of Standards and Technology (NIST).

NIIMBL's mission, as announced last December by the U.S. Department of Commerce and NIST, is to accelerate innovation in biopharmaceutical manufacturing, support the development of standards that enable more efficient and rapid manufacturing capabilities, and educate and train the nation's workforce, making the U.S. the world leader in the industry.

Biopharmaceuticals have shown great promise in medicine - relying on living cells instead of chemistry to treat disease. NIIMBL is meant to generate the innovative advances that will allow more rapid and flexible production with the precision needed to effectively meet healthcare needs and respond quickly to pandemics or other biological threats.

Phillip Singerman, associate director of NIST, praised the proposal submitted by Lee and his outstanding team of faculty collaborators.

"NIIMBL had the most outstanding proposal among the two dozen we received," Singerman said, "and the extraordinary leadership of Professor Kelvin Lee was responsible for that success."

Delaware's congressional delegation was in full attendance at Monday's ceremony and all applauded the potential reach of this new endeavor and the new hope it generates.

U.S. Sen. Tom Carper, who worked for years to save the Chrysler plant, remembered wondering as the bulldozers tore it down - "What good can ever come out of this?"

U.S. Sen. Chris Coons recalled that day, too, as "heartbreaking." 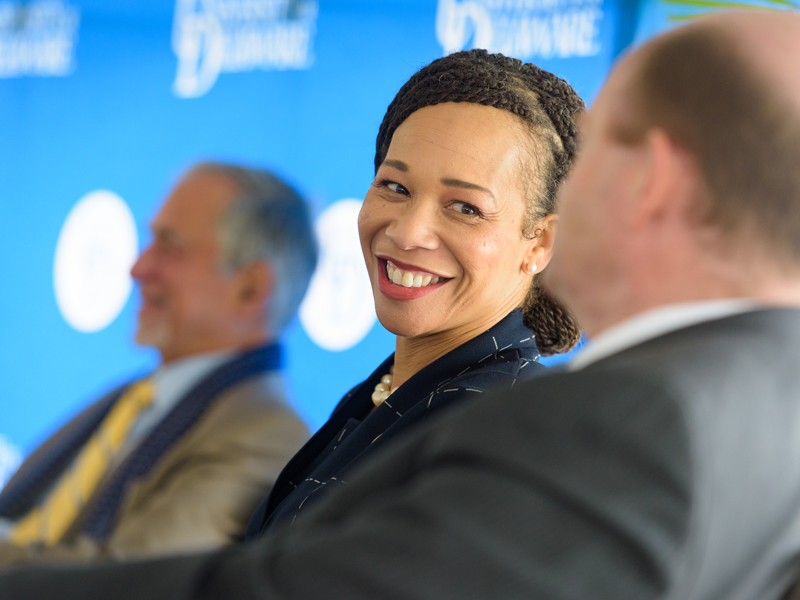 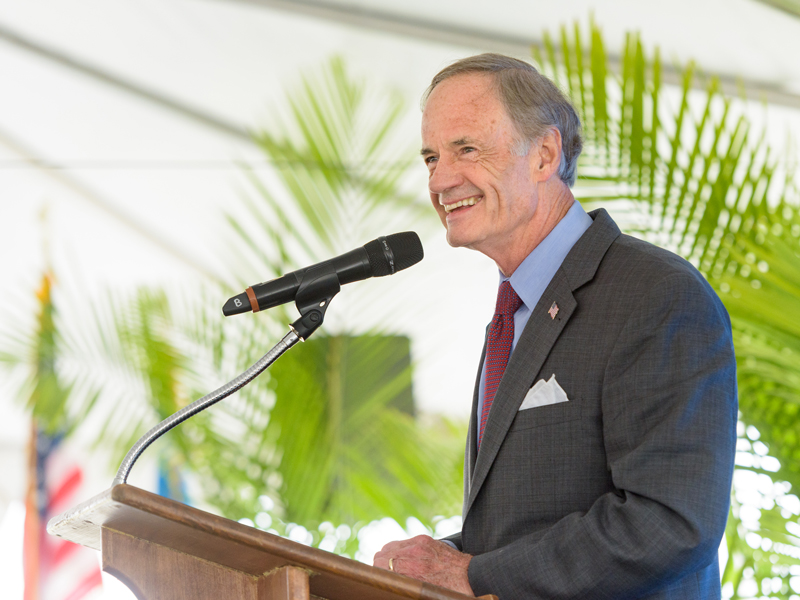 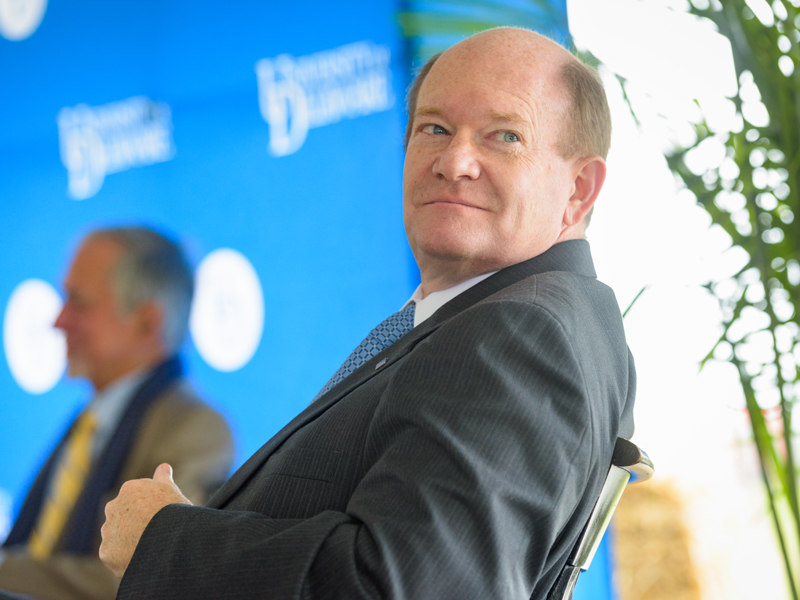 Monday's groundbreaking, by contrast, "is one of those critical moments when you can see the bending of the arc of history toward a brighter and stronger future for Newark, for Delaware and for the world," Coons said.

"Whether you are a scientist or a person working in Wawa - this has importance and meaning for you," said U.S. Rep. Lisa Blunt-Rochester. "It's also about the future of work and not being afraid of technology and the things that are coming, of innovation."

Lee appreciated a day to savor the advances made already - and to look ahead.

"It's great to have these moments to pause and celebrate what is about to happen on a grand scale," he said.