Margot Lee Shetterly, author of the bestselling book Hidden Figures, told an audience at the University of Delaware on Monday, Oct. 23, that the question she is most often asked is: Why haven’t I heard this story before? “Hidden Figures,” was adapted into a 2016 Oscar-nominated film.

In response, she said, she has never come up with an answer that really satisfies her. The book, subtitled, The American Dream and the Untold Story of the Black Women Mathematicians Who Helped Win the Space Race, was adapted into the 2016 Oscar-nominated film Hidden Figures.

The occasion for Shetterly’s talk was UD’s annual Louis L. Redding Lecture, held before a full house in Mitchell Hall on the University’s Newark campus. The audience included the daughter and other relatives of Kathleen Land, retired NASA mathematician featured in the book who was also Shetterly's favorite Sunday school teacher.

The lecture honors the late Louis L. Redding, a civil rights pioneer and prominent lawyer in Wilmington, whose work led to many educational opportunities for African American students across the nation. Mr. Redding’s daughter was in attendance.

Shetterly began her lecture by talking about how far this story of three women has traveled over the past year, and her surprise and delight at the fact that so many more people than she anticipated have reacted so positively.

The women’s story was previously untold, Shetterly said, because our histories are generally missing stories of black protagonists — the everyday, American stories of the scientists, professors, cleaners and so many others of previous generations.

“Humans are a storytelling species,” she said. “And stories matter.” 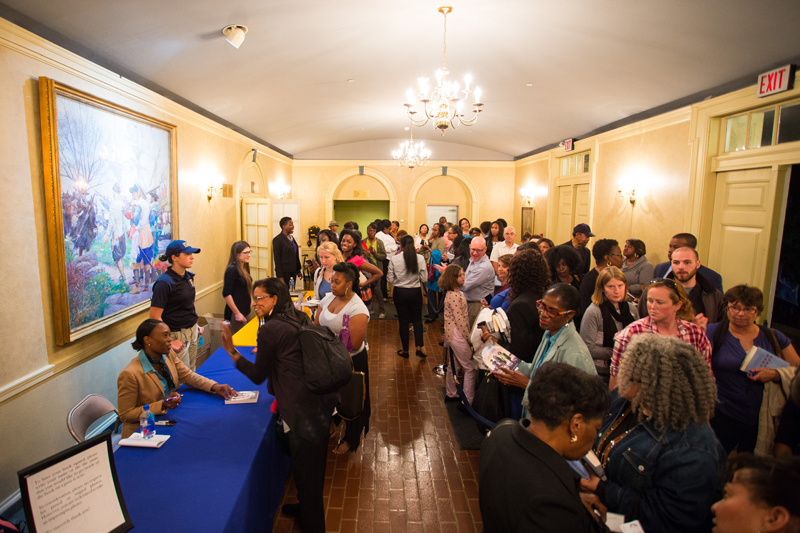 The idea for the book came from a visit to her parents’ house seven years ago, when her father talked about the women he worked with at NASA and their unrecognized work. Shetterly’s husband asked why he had never heard of them.

Shetterly said she then realized that she knew the story, but not the women’s history. I was “shaken out of complacency,” she said.

She told the UD audience more about the women in her book, their histories and work they did for NASA. She encouraged listeners to don their own “hidden figures” glasses — and look for stories like these in classrooms and offices, among friends and family. The lecture began with welcoming remarks from UD President Dennis Assanis, who expressed his personal appreciation of the evening’s efforts.

Carol Henderson, vice provost for diversity, then announced this year’s recipients of the Louis L. Redding The recipient of the Diversity Award was Jennifer Daniels, associate director of the Office of Equity and Inclusion.

The recipient of the Scholar Award was Barbara Romero, a doctoral candidate in biological sciences.

Also at the event, Holly Mendelson, co-publisher of INSIGHT into Diversity magazine, presented Assanis and Henderson with the magazine's 2017 Higher Education Excellence in Diversity (HEED) Award. The award is a national honor recognizing U.S. colleges and universities that demonstrate an outstanding commitment to diversity and inclusion.