The National Endowment for the Humanities is highlighting the Colored Conventions Project (CCP), founded and hosted at the University of Delaware, as one of 50 projects selected for recognition in the agency’s “NEH Essentials” list of important work it has supported in its 52-year history.

CCP is an interdisciplinary and collaborative public humanities project that brings decades of early African American organizing for legal, educational and labor justice to digital life at ColoredConventions.org.

The project, led by UD faculty member P. Gabrielle Foreman, identifies and transcribes hundreds of proceedings from the Colored Convention movement, making these rare documents available in one place for the first time. Thousands of scholars, teachers, students and community volunteers around the country have contributed to the project by transcribing minutes for entry into the digital archive. Beginning in 1830 and continuing through most of the 19th century, some 200 local and national conventions were held in the U.S., with African American leaders and citizens gathering to discuss issues and advocate for equality and civil rights.

“The Colored Conventions Project, supported by a $75,000 grant from NEH, is a research hub centered at the University of Delaware that is using digital tools to bring this nearly forgotten history to light,” according to an account of the project on the NEH Essentials website.

The project summary notes that the recorded history of the conventions was previously scattered and unarchived, “but that is changing now” with the CCP’s work.

“In addition to digitized and searchable transcriptions of the minutes, the project website offers visitors data for text analysis, teaching tools and digital exhibits that profile convention participants, map complex social networks, and explore the community institutions and businesses that supported the conventions,” the NEH says.

The agency also describes how CCP began with a 2012 graduate seminar in which Foreman’s students digitally mapped connections between delegates to various Colored Conventions.

Foreman, who is the Ned B. Allen Professor of English and professor of history and Africana studies at UD, is also a senior library research fellow at the University of Delaware Library and an award-winning teacher and scholar.

Following the graduate seminar, CCP co-founder Jim Casey ’17PhD, then a doctoral student, proposed moving the project to an academic platform, and fellow co-founder Sarah Lynn Patterson, a current doctoral candidate, conducted research on the role of African American women in the conventions.

The College of Arts and Sciences’ Interdisciplinary Humanities Research Center provided CCP with its first funding. 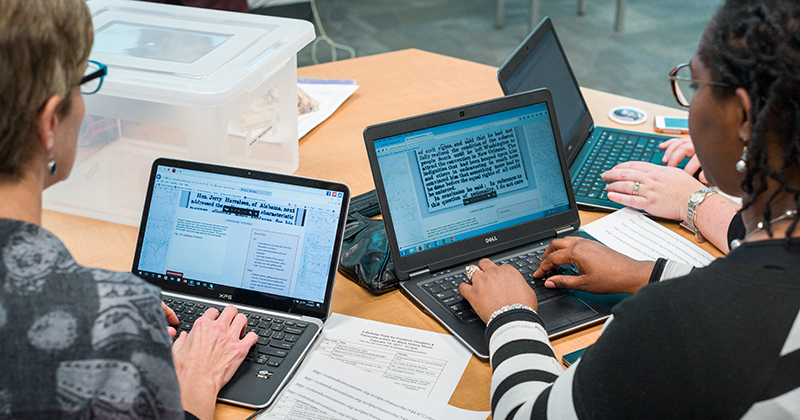 Volunteers who came to UD’s Morris Library on Frederick Douglass’ birthday in February, transcribe minutes from the Colored Conventions. Photo by Evan Krape

“The Colored Conventions Project is a team-based digital project that engages the way thousands of students across the country learn about racial justice efforts and what tens of thousands of people know about the long history of civil rights organizing,” Foreman said last year, when the CCP team won the 10th Modern Language Association Prize for a Bibliography, Archive or Digital Project.

She acknowledged “the collective efforts of scores of UD project participants, national teaching partners and hundreds upon hundreds of volunteers, as well as the enthusiastic support of the College of Arts and Sciences, UD’s dedicated library professionals and leadership and the Department of English.”

The agreement allows CCP, along with the project’s national teaching partners and the thousands of students who engage in original research through the project’s curriculum, to present images from Accessible Archives’ databases on the CCP website.

The National Endowment for the Humanities was created in 1965 as an independent federal agency.

Over the years, the agency says, it has awarded more than 64,000 grants totaling $5.5 billion and has leveraged in today’s dollars nearly $4.1 billion in private matching donations, leading to the creation of books, films, museum exhibits, online resources and discoveries.

Its new “NEH Essentials” list includes a wide range of projects it has supported, from underwater archaeology to a 140,000-document collection of George Washington’s papers to work in preserving the endangered language of the Tlingit people of the Pacific Northwest.

The selected projects “open a window onto our history and our future … [and] have shaped what we know about ourselves and our world,” the NEH says.