When national laboratories, with their expansive facilities and amazing capacity, join forces with research universities and their innovative scientists and students, powerful things can happen.

A new partnership between the University of Delaware and the U.S. Department of Energy's Argonne National Laboratory, announced last week during a two-day Innovation in Materials Science workshop, has just that sort of potential.

UD President Dennis Assanis knows this especially well, having worked extensively with both Argonne and Brookhaven National Laboratory while in previous roles at the University of Michigan and Stony Brook University.

"Argonne and Brookhaven have a special place in my heart," Assanis said. "I hope the three of us together will do amazing things. I feel this is the way we can move into the future, create pride and ambition - not only involving one lab, but multiple laboratories."

The University's new partnership with Argonne, formalized with a signing ceremony as the workshop opened Thursday Oct. 18, emerged from the National Lab Day event hosted by UD in 2016. Former Secretary of Energy Ernest Moniz and leaders from most of the nation's 17 major laboratories attended. Assanis spoke that day of his hope that UD would establish strong ties with the national labs. 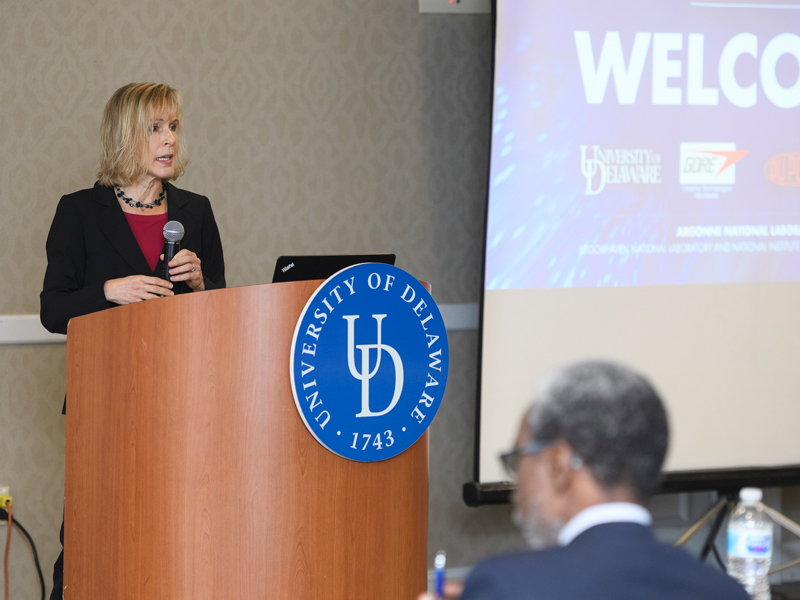 Argonne Interim Director Paul Kearns was the signatory for the 70-year-old laboratory Thursday and together with Assanis discussed collaborative work that could develop through this partnership.

"We see great potential here," Kearns said, "and the president is obviously thinking big. We need to start with a foundation to build on."

"It's about bringing together diverse teams - not simply different people - but being purposeful and intentional to the way we are building those teams to highlight diversity across all of its dimensions," he said. "I'm confident the relationships and partnerships that come out of the work here will extend far into the future and impact the world."

The workshop was designed with such diversity in mind, bringing a broad range of scientific disciplines and approaches together, along with representatives of industry.

Researchers from UD and Argonne wasted no time getting started. They spent hours together Thursday, learning about each other's work and exploring collaborative opportunities. Matt Doty, director of the UD Nanofabrication Facility and associate professor of materials science and engineering

They heard from Matt Doty, director of the UD Nanofabrication Facility and associate professor of materials science and engineering, who works with quantum dots - often called "artificial atoms" - and is interested in redesigning materials from the ground up, one atom at a time.

They also heard from John Mitchell, associate division director and senior chemist at Argonne's Materials Science Division, who discussed design and synthesis of new compounds and materials "in which the extraordinary effects of quantum mechanics give rise to exotic and often incredible properties."

By Friday morning, almost 10 project proposals already were under construction, according to Kristi Kiick, deputy dean of UD's College of Engineering and Blue and Gold Distinguished Professor of materials science and engineering.

"The synergies between Argonne and UD have given rise to proposals ranging from the production of inorganic materials with potential in quantum computation, to novel catalysts for converting greenhouse gases into commodity chemicals, to new characterization tools to characterize ultra-fast materials transformations," Kiick said.

The teams identified during the workshop will compete for seed grant money that will be awarded early in 2018. It's precisely the kind of work that is needed now, said Babatunde Ogunnaike, dean of UD's College of Engineering.

"Important and consequential problems cannot be solved alone," Ogunnaike said. "Not until we put our hands together can we make a difference - and that's what we're trying to do here.... The days are gone in which we develop these ideas, publish them in Science and Nature, declare victory and move on. It's essential that we take these ideas and move on to the next stage."

Ogunnaike's words resonated with James Kegelman, senior staff engineer with Siemens who graduated from UD in 1988 and now has a daughter, Bridgette, in UD's freshman class.

"The dean hit the nail on the head," Kegelman said. "Academia can't just write a paper, publish it and that's the end of it. That's almost 'wasted' knowledge.

"Industry doesn't always do things with the latest and greatest technology. It can be slow to pick up on the newest learning. There are cost factors and regulations.... But if you get in early enough - in the early stages of design - it could really be a benefit." Doug Doren, deputy dean of the College of Arts and Sciences

Both of Delaware's U.S. Senators - Tom Carper and Chris Coons - spoke Friday morning, expressing firm commitment to science and the innovation, technology and economic development that spring from research.

Carper noted that Gov. John Carney is working to create a nurturing environment for startup companies and the new jobs they bring.

It's essential work, Carper said. When he was inaugurated as governor of Delaware in 1993, the DuPont Company had 27,000 people reporting to work, he said. Now, it has about 4,000. The state's two auto assembly plants - Chrysler and GM - both have closed.

Coons, who has a degree in chemistry, made a case that Delaware is prime territory for research and innovation - and all the more as it continues to build partnerships with national laboratories and industry.

The national labs are "treasures," he said, with stunning facilities and opportunities for researchers.

"Our national labs are worth not just funding and saving, but fighting for," he said.

And, he said, "Delaware is very fortunate to have in President Assanis a leader who personally understands this work and sees the opportunity in front of us to build out what I hope will be a lasting, concrete partnership.... We should stay optimistic about the future of a partnership between Argonne, UD and Brookhaven."

Coons said he and U.S. Sen. Lindsey Graham (R-S.C.) would soon introduce a bill to create a foundation that could facilitate partnerships with the Department of Energy.

Argonne emerged from the Manhattan Project at the University of Chicago in 1946 with a mandate to develop peaceful uses for what was then a new energy source - nuclear power. The laboratory now has 3,300 full-time employees and had an annual budget of $780 million in fiscal year 2016.

Among its holdings are the Advanced Photon Source, with its linear accelerator, booster synchrotron, electron storage ring, 35-sector experiment hall and at least two x-ray beamlines in each sector. The APS gives researchers access to high-energy X-rays for use in materials science, biology, physics, chemistry, environmental science, geophysical and planetary sciences. 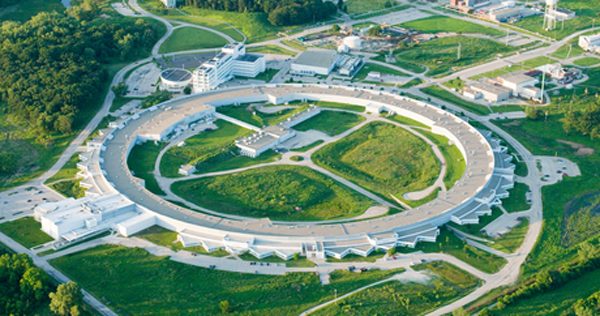 With its new Chain Reaction Innovations program, directed by John Carlisle, Argonne offers uncommon traction for energy and science entrepreneurs, awarding "embedded" status at the lab for two years, with up to $420,000 in funding, laboratory and office space, access to technical guidance and collaboration, business mentors and other supports.

It's a smart idea, Carlisle said, to bring market intelligence into the earliest stages of discovery science, because it improves the science in ways unanticipated by most scientists working in the lab.

"Product innovation is not the same as great science," he said. "The differences are subtle, but important."

"We will reach out more and more to national labs," he said. "We have partnerships beginning with the University. How do we support young companies and create an active network of growth?"

On Friday, attendees got aboard UD's fuel cell bus for tours of labs, nanofabrication facilities and microscopy resources at UD's Harker Interdisciplinary Science & Engineering (ISE) Lab and explored facilities and projects under way at the Delaware Technology Park's wet-lab incubator on the STAR campus, where 15 startups have maxed out the available space. 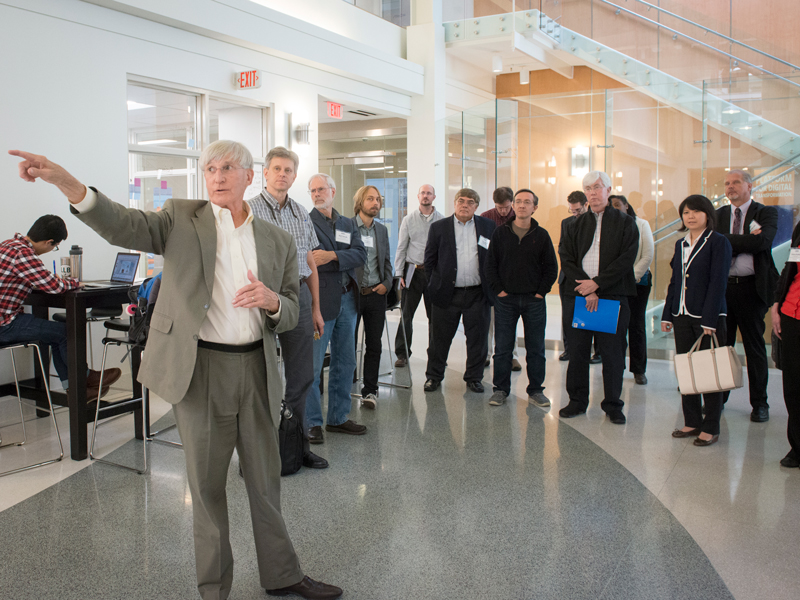 Guiding a tour of UD’s STAR campus for Argonne National Laboratory officials is Mike Bowman, associate director for the Office of Economic Innovation and Partnerships.

And much more is on the way, as construction continues on a 10-story tower on the STAR campus and has just begun nearby on the six-story Biopharmaceutical Innovation Building, which will house the $70 million National Institute for Innovation in Manufacturing Biopharmaceuticals (NIIMBL), a federally funded project that includes 150 companies, educational institutions, nonprofits and state governments.

The time is right for the UD-Argonne partnership, Assanis said.

"Each of our distinguished institutions has a remarkable track record of success in illuminating the fundamental properties of materials and then translating these discoveries into real benefits for society," Assanis said. "Whether engineering better car batteries, boosting the efficiency of solar cells to harness more clean energy or training the next generation of scientists and engineers, our R&D activities help America tackle the challenges of today and prepare for the exciting future that lies ahead."

Argonne National Lab, located about 25 miles southwest of Chicago, emerged from the University of Chicago’s work on the Manhattan Project in the 1940s. It operates five national user facilities and has 14 research divisions working in areas ranging from materials science and high-energy physics to biology and advanced computer science. It has more than 3,000 employees, 7,000 facility users and many major scientific discoveries to its credit.