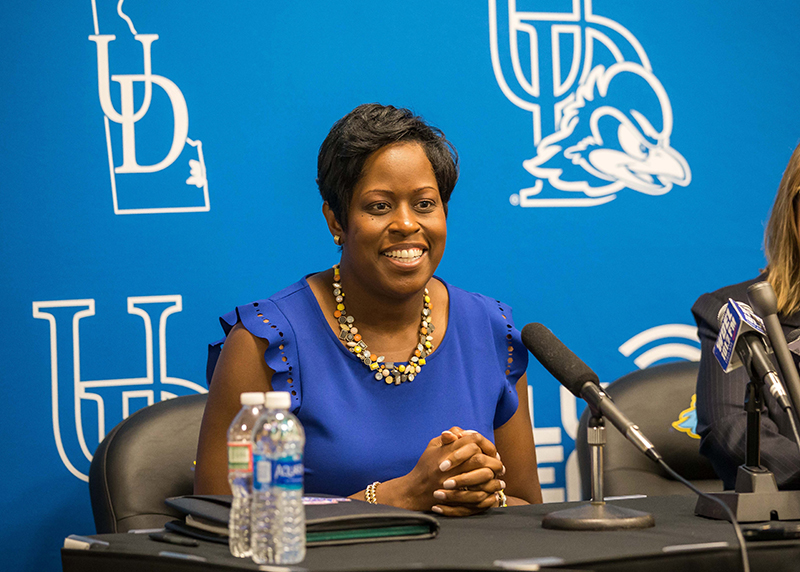 Natasha Adair, new head coach of women's basketball at UD, speaks at a news conference May 15 at the Bob Carpenter Center. 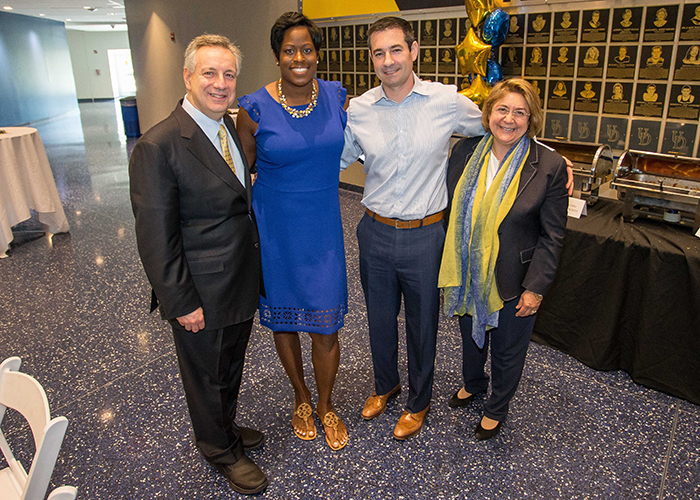 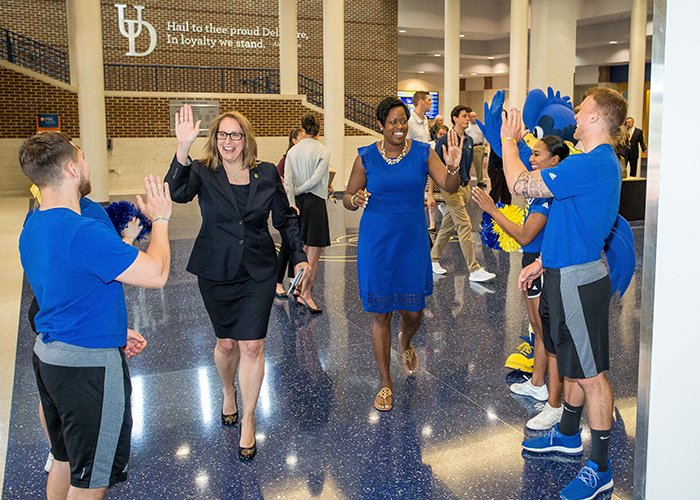 Article by UD Athletics staff Photos by Mark Campbell May 15, 2017

University of Delaware Director of Athletics and Recreation Services Chrissi Rawak announced Sunday afternoon, May 14, that Natasha Adair has been selected as just the fourth women’s basketball head coach in the program’s illustrious 46-year history.

Adair was officially introduced to the Blue Hens community on Monday, May 15, at the Bob Carpenter Center.

“It became clear very quickly during this search that Natasha was the right person to lead this program,” Rawak said. “She brings a competitive spirit to all she does and is committed to helping young women grow on the court, in the classroom and in the community, embracing and supporting the complete student-athlete experience.”

Adair joins the Blue Hens from Georgetown University, where she turned around a four-win Hoya program to a postseason contender in three seasons as head coach. Behind Adair’s leadership this past season, GU finished the year with a 17-13 record, the most wins for the Hoyas since 2011-12, and garnered the team’s second straight trip to the Postseason WNIT.

Adair was recently selected as a court coach for the 2017 USA Basketball Women’s U19 World Cup Team trials.

“Natasha Adair personifies the dream candidate to lead the new era of Blue Hens basketball,” said UD President Dennis Assanis. “She instantly brings the attributes that we seek in our new hires to drive our programs to success. With a deep commitment to both academics and athletics, she has mentored and guided student-athletes to achieve their career goals both on and off the court.  Natasha is an outstanding leader who will actively engage our players, our campus and our UD community.”

The Silver Spring, Maryland, native is no stranger to the Colonial Athletic Association as her first head coaching stint took her to the College of Charleston, where she was 35-31 overall. In the Cougars’ first season in the CAA in 2013-14, Adair guided The College to record of 19-15, marking the third-highest win total in the school’s Division I era.  Additionally, the squad finished third in conference play, defeated five postseason teams from the previous year and advanced to the semifinals of both the CAA Championship and the Women’s Basketball invitational.

“I would like to thank President Dennis Assanis and Director of Athletics Chrissi Rawak for this amazing opportunity to lead the University of Delaware's women's basketball program,” Adair said  “Chrissi is relentless in her efforts to surpass all expectations for excellence here at the University Delaware. Under her leadership, and with the unwavering support of President Assanis, the decision to become a Blue Hen was not only an easy one but also the right one for my family and me. Their passion and commitment to comprehensive excellence for the student-athletes, along with the entire University community, is what compelled me to make this exciting decision.”

Adair played collegiately at Pensacola Junior College (1990-92) before playing and graduating from the University of South Florida with a degree in communications in 1994. She previously spent 13 seasons in the assistant coaching ranks, with seven years (2004-12) at Wake Forest University and six seasons (1998-04) at Georgetown University. Her coaching career has seen her develop and mentor 12 players who went on to play at the professional level.