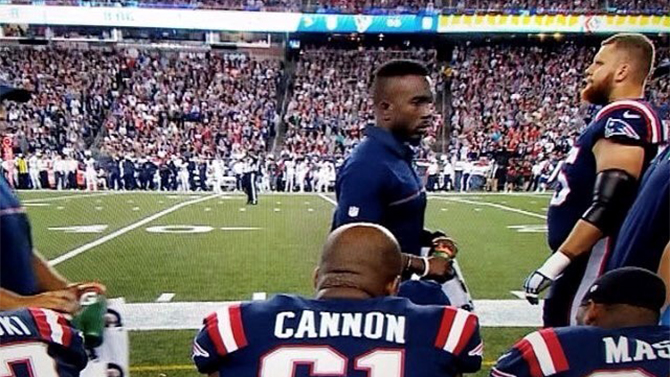 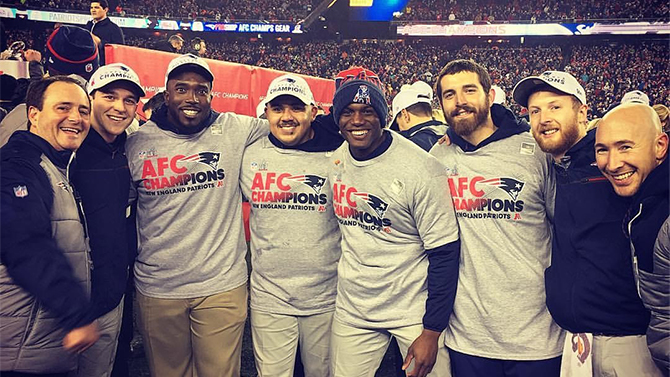 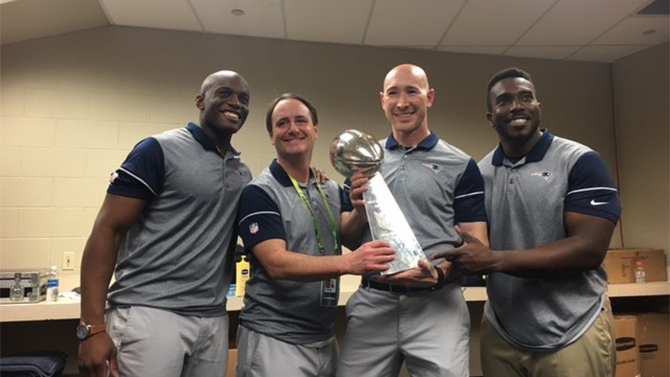 Article by Dante LaPenta Photos courtesy of Michael Akinbola May 17, 2017

The annual award recognizes an NFL staff for distinguished service to the club, community and athletic training profession.

“I’ve been blessed to have such an extremely successful season in my first year,” said Akinbola.

Akinbola’s path to the Patriots is an interesting one. Before coming to UD, Akinbola studied kinesiology and played football for DePauw University. His playing career gave him a deeper layer of understanding and credibility for his role as an NFL physical therapist.

“I understand the physical demands. I understand the nuances of the job — the competitive nature. Biomechanically, I have a better appreciation for what their bodies go through,” he said.

After completing his doctorate in 2011, he stayed with the University to do a sports residency with the Blue Hens football team. The experience confirmed what Akinbola was already thinking: He wanted to work in elite football.

After the residency, Akinbola was working at Premier Physical Therapy when he attended a national sports medicine conference in San Diego. He introduced himself to a member of the Indianapolis Colts athletic training staff. Through this colleague and some other connections, Akinbola was able to volunteer for the Colts for pre-season training camp and organized team activities as a physical therapist/sports medicine intern.

“That was my first exposure to NFL football. And UD definitely played a role; it helped with name recognition on their end, and confidence as a clinician on my end,” he said.

Akinbola then applied and was accepted to Bridgewater State University to pursue a master of science degree in athletic training. The degree moved him toward the highly sought after athletic training/physical therapy dual certification.

While studying in New England, he jumped at an opportunity to volunteer for the Patriots — collaborating with the sports medicine, athletic training, and strength and conditioning staffs.

Akinbola then honored a previous commitment with the Colts and joined the team for OTAs that summer. But it wasn’t long before the Pats came calling again.

Right before the 2016-17 NFL training camp, the Patriots made an offer to bring Akinbola on full-time. His first full day was the first day of training camp. He met the full medical staff and was formally introduced to the team.

All of this happened before Akinbola completed his athletic training master’s degree. Never shying away from a challenge, he worked with the University and finished his AT certification online. He is now preparing for athletic training boards after which he will be fully certified.

Akinbola is quick to credit the University of Delaware for its role in his development as a health sciences professional.

“The University of Delaware has strong AT and PT alumni classes,” he said. “I always felt like I had a network of people to lean on. The culture that UD instilled in us is that you always keep improving; you never stop.”