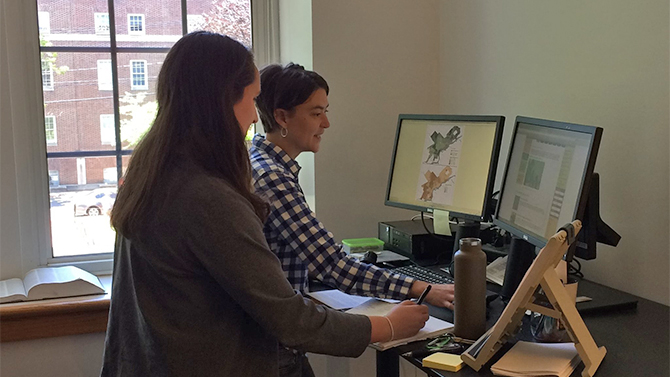 Haley Stanko (left) and Lindsay Nayor, assistant professor of geography, are conducting research on the provision of accessible healthy food in urban areas. 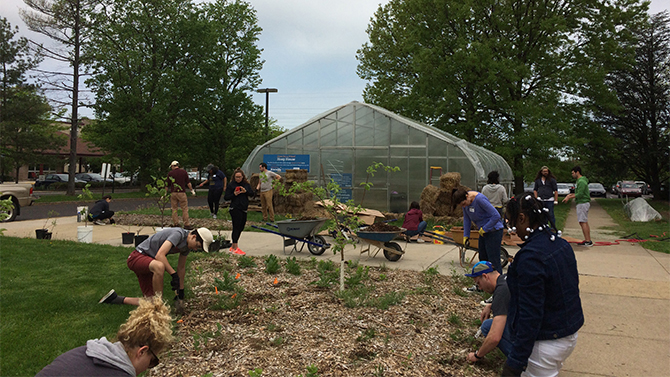 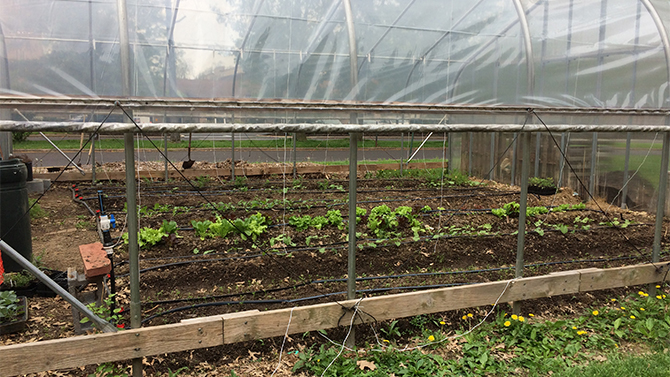 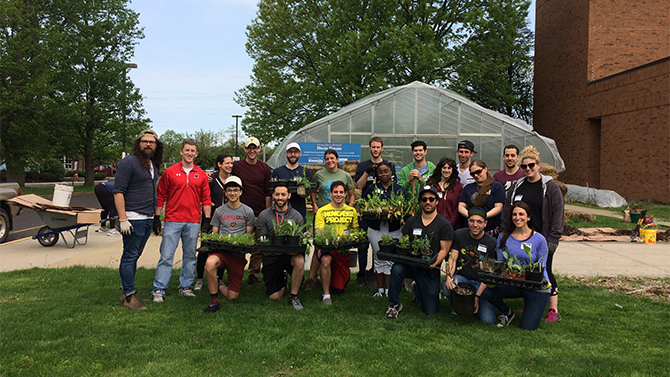 University of Delaware geography major Haley Stanko flips through a marble notebook filled with interviews, field notes, graphs and flowcharts as she explains the project that has consumed her past year.

As an undergraduate, and only a sophomore, Stanko is impressively engaged in the research of Lindsay Naylor, assistant professor of geography in the College of Earth, Ocean, and Environment.

As part of Naylor’s research on food justice, Stanko is investigating an initiative to plant fruit and vegetable bearing plants and trees in cities, in this case Philadelphia, where there is limited access to fresh foods.

In her research, Stanko works closely with an organization called the Philadelphia Orchard Project (POP). The group planted and cultivates 50 urban orchard sites creatively incorporated into the busy city, some as small as a plot of berries in the median of an intersection.

“Imagine being able to pick a pear off of a tree on your walk to school or work,” explains Naylor.

Urban forests, like the ones planted by POP, are a possible solution to a phenomenon that the U.S. Department of Agriculture, (USDA) calls “food deserts” and a newly emerging term, “food swamps.”

In urban food deserts, at least a third of the population lives more than a mile from a large grocery store, leading to inaccessibility to nutritious and fresh foods. Similarly, food swamps are areas affected by not only a lack of fresh produce, but also the excessive availability of hyper-processed foods such as fast food items or heavily processed and packaged foods available at small corner stores. In these areas, inexpensive high calorie foods are more accessible than nutritious foods, resulting in undernourished communities.

Naylor’s work approaches this issue from the perspective of food justice. This means recognizing the structural conditions and factors like race, economic class and gender, that make food inequality plague low-income communities over their wealthier counterparts.

“If people aren’t choosing healthy food, it’s not necessarily because they are lazy. It’s typically because they often don’t have the same access,” says Stanko. “Urban food forests, such as POP orchards, are a way to use land to produce food for the community and reach marginalized populations.”

Stanko investigates these structural conditions by interviewing policymakers, from grassroots advocates to parks and recreation employees. She is interested in urban planning, particularly whether community orchard initiatives come together through bottom-up or top-down planning, and she has learned that community feedback is crucial.

“The needs of a community can be ignored when professionals do what they think is right without having grassroots support and opinions,” says Stanko.

Naylor and her students also are interested in understanding how these orchards fit into their intended communities — who uses them, and how frequently — to gauge community awareness of the orchards. The work begins with examining available data.

“There has been a lot published on how to grow trees in a city, but we are more interested in the process- who grows the trees and who benefits from the fruit. We study how communities are changing, and whether the people who need the food are getting it,” says Stanko.

In their work, Naylor and Stanko hope to improve communication challenges through surveys and interviews. By surveying five neighborhoods surrounding POP orchards, the researchers will collect data on where residents purchase food and gauge their thoughts on the orchard’s usefulness. Interviews conducted at harvesting and pruning events will tease out whether volunteers are coming from the immediate neighborhood or traveling in to help.

The survey data will help POP administrators, and related organizations, set future goals to best serve the community and better inform volunteers. The research also will be valuable to cities across the globe, since the challenge of access to healthy food is not unique to Philadelphia.