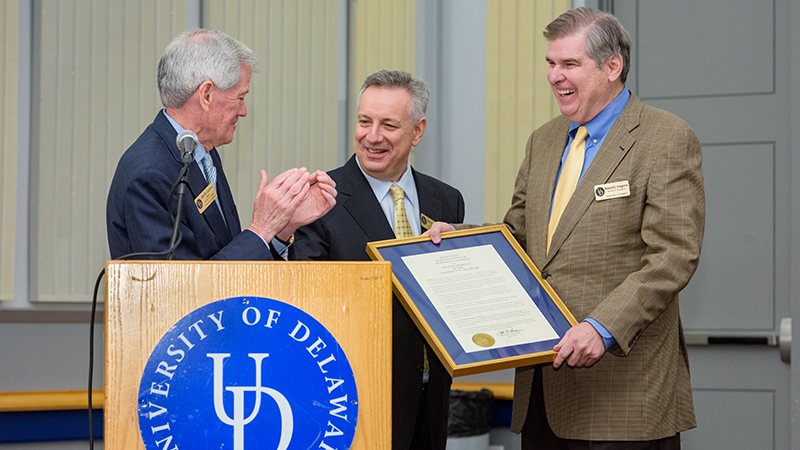 From left, Board Chairman John Cochran and President Dennis Assanis congratulate trustee Howard Cosgrove on his 24 years of service to the Board of Trustees. 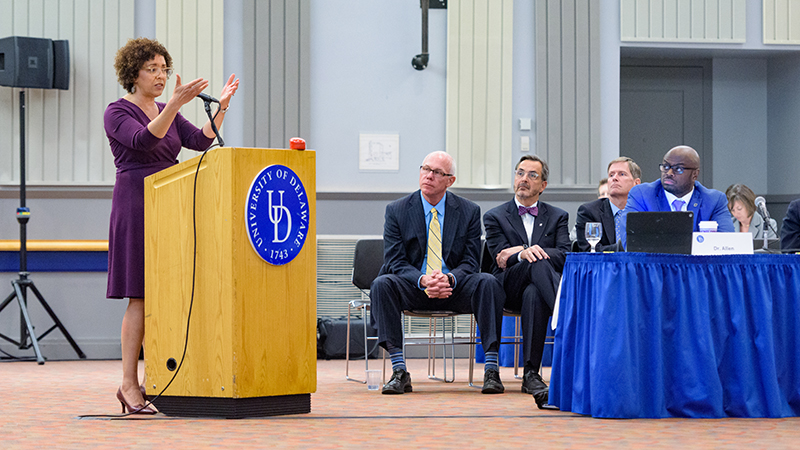 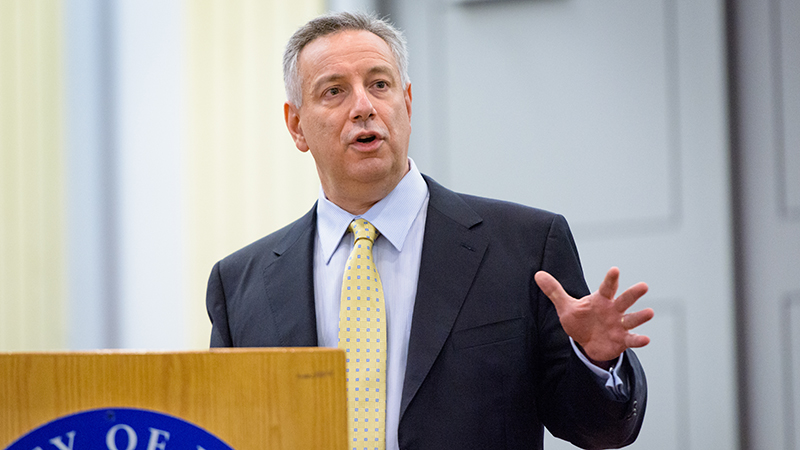 UD President Dennis Assanis shares highlights of "a phenomenal year" with the trustees.

Article by UDaily staff Photos by Evan Krape May 24, 2017

President Assanis recaps the year at spring board meeting

Just a few weeks shy of his first anniversary as president of the University of Delaware, Dennis Assanis shared highlights of what he called “a phenomenal year” at the spring semiannual meeting of the Board of Trustees on May 16 in the Trabant University Center.

He reviewed notable accomplishments this year in each of the strategic themes for the University – enhancing student success, building an environment for inclusive excellence, strengthening interdisciplinary and global programs, fostering a spirit of innovation and entrepreneurship, and investing in intellectual and physical capital.

Assanis stressed that everything at the University ultimately supports student success. All the other priorities are meant to enhance the University’s chances for succeeding in that objective. “We have an unwavering commitment to the success of our students,” he said.

In the area of inclusive excellence, the University will be instituting new measures to ensure diverse pools of candidates in searches for both faculty and staff, including a midpoint check to make sure that the demographics of the candidates matches the demographics in that field.

The University needs to work actively to increase the number of doctoral students by at least 1,000 students, he said. This will require support for graduate fellowships, and it is important for students to complete their graduate degrees in a reasonable amount of time.

Assanis praised the Horn Program in Entrepreneurship and said he looks forward to broadening its scope so that there are entry points there from all schools and colleges. He suggested the possibility of a certificate program or “mini-minor” of nine or 10 credits focused on entrepreneurship.

He highlighted several previously announced initiatives and projects such as the new incubator DTP@STAR, the National Institute for Innovation in Manufacturing Biopharmaceuticals (NIIMBL), the Rapid Advancement in Process Intensification Deployment (RAPID) Manufacturing Institute and the Delaware Innovation Space at the DuPont Experimental Station facility in Wilmington.

In terms of intellectual capital, Assanis said he would like the faculty to grow by 250 over the next five to seven years to enhance disciplinary excellence and to develop clusters of excellence that cut across disciplines.

Discussing the importance of alumni support and philanthropy, he noted that over the past year he and his wife, Eleni, have met with thousands of alumni across the country. “These are alumni who are ready to help.” Philanthropy, Assanis said, is the “margin of excellence.”

Chris Lucier, vice president for enrollment management, provided a report on admissions and an overview of this fall’s incoming freshman class. “This has been a record-setting admissions year in many ways,” he said, noting there was a record number of applications overall, as well as record numbers of applications from Delaware students and from under-represented minority students.

“We project an enrollment of 4,250, right at our target, which will also be a record as 4,176 is the previous high in 2014,” Lucier said. The class represents the largest enrollment of first-year Delaware students since 1993 and is also geographically diverse with two-thirds of the states represented. The number of under-represented minority students is projected to be just over 700, compared to the previous high of just over 600. International enrollment is projected to be around 220, compared to last year’s record number of 190.

Lucier provided thumbnail sketches of some of the individuals who will make up the Class of 2021, including a young man who built a functional wheelchair out of K’nex toys for a paralyzed kitten, a trapeze artist who is also an independent fashion designer, two students who co-founded a nonprofit aimed at stimulating thinking among young people in Delaware, and a rower and harpist who has performed in Carnegie Hall.

Looking ahead, Lucier said, “We must continue to focus on developing and promoting distinctive programs, creating and communicating value, especially postgraduate outcomes, and building enrollment capacity in high demand programs.”

Provost Domenico Grasso updated the Board of Trustees on three areas: faculty scholarship, student achievement, and engagement and entrepreneurship.

He highlighted research projects in the areas of health, wellness, the life sciences, energy and the environment, and he noted several awards and grants received by faculty, including eight National Science Foundation Career grants awarded since last July.

Grasso also recognized Jason Wardrup, an Army ranger with multiple tours in the Middle East, who will be receiving his bachelor’s degree with distinction in energy and environmental policy this year. Currently hiking the Appalachian Trail, he will be returning to campus for Commencement.

Grasso saluted UD’s scholar athletes, noting that the football team had a record number of players on the Colonial Athletic Association Football Academic All-Conference team and the women’s tennis and women’s cross country programs have been honored by the NCAA for outstanding academic success.

He also reported that a new event was initiated this year for seniors who have contributed to the senior class gift. Mirroring the Twilight Induction ceremony that welcomes new students to the campus, a new event, the Twilight Toast, brought students together on the steps of Old College.

Grasso also noted that UD was one of a select group of universities invited to the Japanese Embassy to talk about nation-to-nation collaboration on cybersecurity, particularly timely given recent world events.

“In the five years since its inception in one of my graduate classes, the CCP has grown into an ongoing project of 25 graduate student committee leaders, undergraduate researchers and librarians who convene every week like a class that never ends and has gone viral,” Foreman said.

“We’ve created a research curriculum that has now guided more than 1,300 students across the country in their exploration of this movement, working with databases, historical images and data driven visualization,” she said.

The award-winning CCP is changing the face of both 19th century U.S. history and the growing field of digital humanities, she said.

At the meeting, the Board of Trustees approved several actions, including resolutions:

• to increase dining plan rates by an average of 2.5 percent, effective fall 2017;

• to authorize the administration to proceed with several Facilities projects;

• to approve the University’s contributions to the Newark Regional Transportation Center Project; and

• to approve the president to confer degrees at Commencement on May 27.

In other action, the Board elected two new trustees: Debra Hess Norris, Unidel Henry Francis du Pont Chair in Fine Arts, to serve a six-year term, and Georgina Class Peters, a 2016 alumna and current graduate student, to serve as Recent Graduate Trustee for a two-year term.

Two departing trustees who completed their terms at the May 16 meeting received special recognition. Honored were Niño Rosal, who served for two years as the Recent Graduate Trustee, and Howard Cosgrove, who served on the board for 24 years.

Cosgrove’s tenure included service as the chairman of the board from 1999-2009. A resolution in Cosgrove’s honor noted that he “has gained the respect of his fellow trustees and has provided sincere and thoughtful counsel on a myriad of issues of critical importance to the University and its students, and in so doing has actively shared in and supported the pursuit of continued prominence and success for the University of Delaware.” Cosgrove also was appointed trustee emeritus.