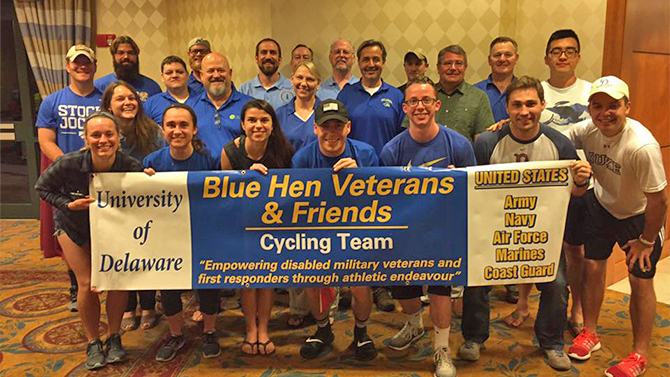 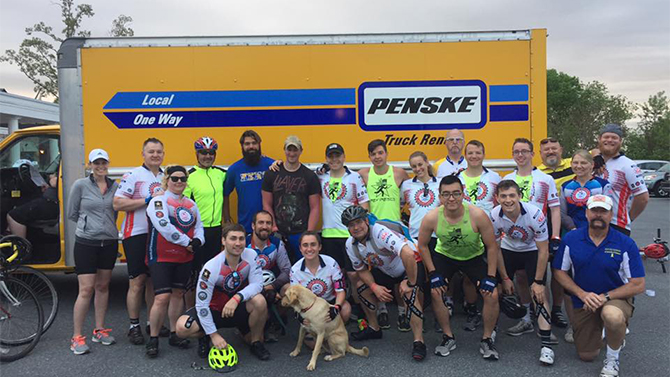 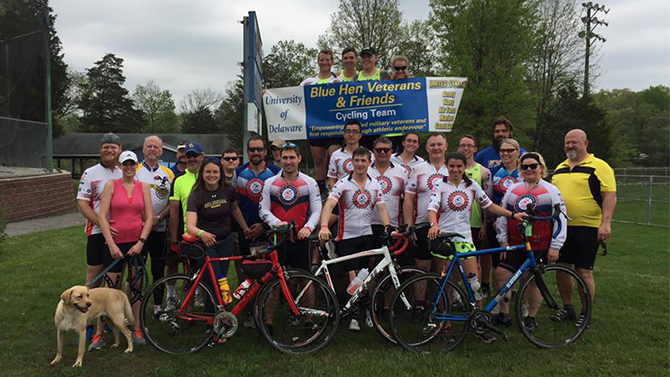 The Face of America

Blue Hen Veterans, a registered student organization sponsored by the University Student Centers in the University of Delaware’s Division of Student Life, led a UD team for the fourth year in a row during the 2017 Face of America ride.

This World T.E.A.M. Sports event brings together adaptive and able-bodied athletes in support of injured military veterans, and raises monetary donations for the empowerment of disabled individuals.

A total of 172 donors supported the Blue Hen Veterans and Friends Cycling Team, which numbered 26, including Provost Domenico Grasso and group adviser Paul Pusecker. In total, almost 600 riders from across North America participated in this year’s event.

“The ride was not only inspirational, but it also allowed me to feel the same spirit of camaraderie I remember from my time in the military,” said Grasso, who joined ROTC as a college student and then spent four years as an active-duty Army officer, followed by 11 years in the Army Reserves.

Grasso said he enjoyed meeting new people on the ride, including several UD ROTC cadets, and learning about their personal stories during the weekend-long event.

“I’m proud to call them Blue Hens, friends and fellow veterans,” he said. “I look forward to joining the ride next year.”

The UD team rode a two-day, 120-mile route from Valley Forge to Gettysburg, surrounded by the historic and idyllic Pennsylvania countryside.

“This event helps bring together students, alumni, and our friends from the community and we always have a lot of riders come back year to year. The camaraderie and patriotism that is on full display during the two-day cycling event is something to behold and I absolutely believe that this ride does change lives,” said Jason Wardrup, 2017 team captain.

Students who participate have the opportunity to make lasting connections with others and get a free bike, but the full benefits of riding in Face of America are impossible to quantify.

“I have been blessed to travel to many countries, meet very influential people and even run across the United States, but the Face of America bike ride ranks as one of the most memorable experiences of my life,” said senior and Army ROTC cadet Micah Petersen. “Last year, I met a veteran named Jerry who is a double leg amputee that used a hand cycle to complete the 120-mile ride. Jerry inspired me not only with his tenacity, but his refusal to let his injury steal his joy and passion for life. Blue Hen Veterans is an exceptional student organization working to enrich veterans’ lives and bridge the civilian-military divide.”

The 2018 Face of America ride will be held April 27-29. Adaptive athletes can register to ride in The Face of America at no cost, and are also eligible for transportation assistance during their first year of participation.

Blue Hen Veterans collaborates with Newark Bike Project to obtain free secondhand bikes for students who are interested in participating but lack a bicycle, which they can then keep following the event. Interested participants can contact the group for more details on joining the Blue Hen Veterans and Friends Cycling Team.