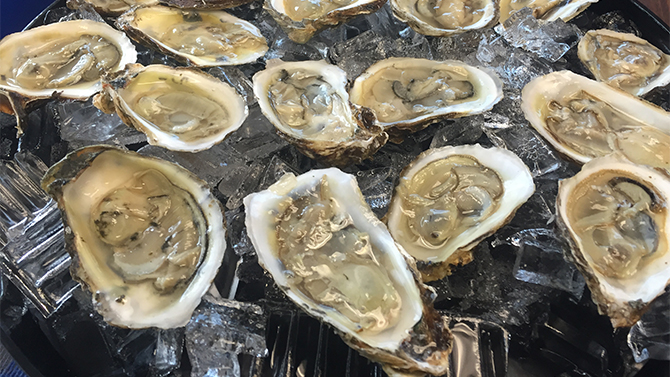 UD researchers presented a workshop on the best ways to market oysters. 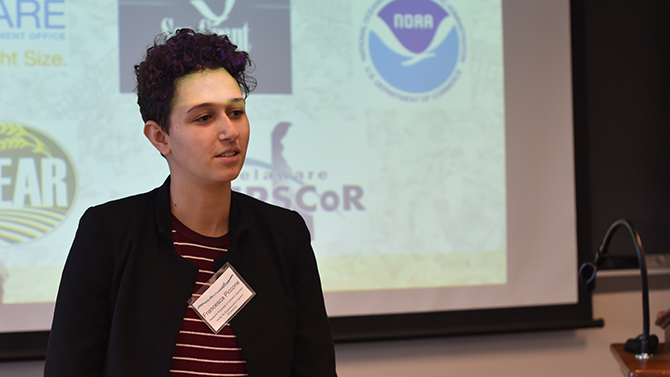 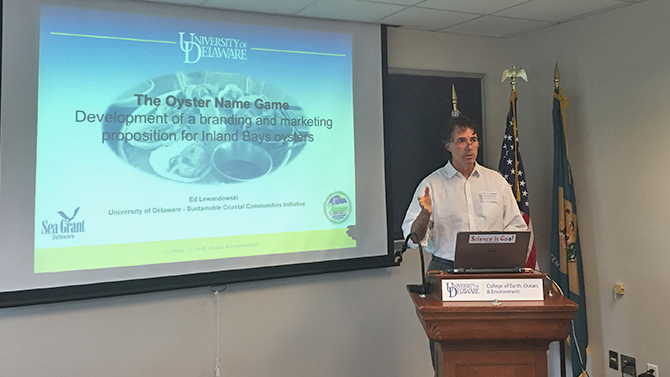 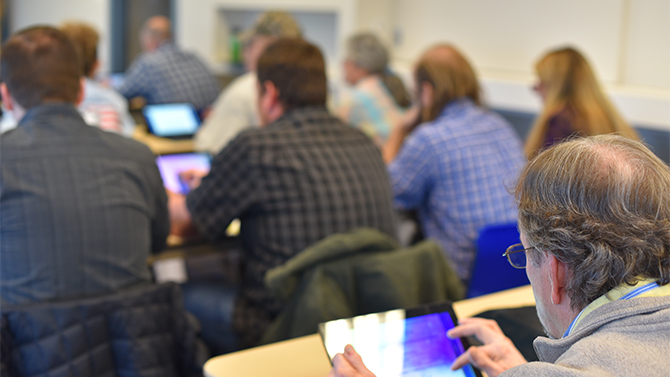 UD researchers present findings on how to best market oysters

Researchers from the University of Delaware recently hosted members of Delaware’s oyster industry to share results of studies about how to best market their products.

Those studies showed that demand for their product is strong and consumers should be ready to pay good prices once the supply arrives.

The results were reported at a Consumer Preferences for Delaware Oysters: An Economic Evaluation of Marketing Messages workshop held on Feb. 9 at the Cannon Laboratory on the Hugh R. Sharp Campus in Lewes.

The workshop was hosted by the Center for Experimental and Applied Economics (CEAE) and sponsored by Delaware Sea Grant, housed in UD’s College of Earth, Ocean, and Environment (CEOE).

The results presented at the workshop were gathered over the past three years, when members from CEAE collected data at various locations throughout Delaware — such as the Cape May-Lewes Ferry terminal, at Ag Day in Newark, at 16-Mile Brewery in Georgetown, at Famous Joe’s Tavern in Wilmington, and at Delaware Division of Motor Vehicles — to gauge consumer preferences for local oysters.

Kent Messer, the Unidel Howard Cosgrove Chair for the Environment and director of CEAE, which is housed in the University’s College of Agriculture and Natural Resources (CANR), said the researchers — specifically Tongzhe Li, post-doctoral researcher in CEAE, and Maik Kecinski, assistant professor at the University of Alberta — gained a number of good insights during the study and wanted to make sure the results were getting out to industry professionals.

As the state does not currently have an aquaculture industry, Ed Lewandowski, the acting director for DESG’s Marine Advisory Service, said that the researchers were interested in looking at the potential for getting an oyster product into the marketplace so that when Delaware aquaculture is operational, producers can hit the ground running as well.

“It’s a competitive industry. You’ve got raw bars popping up all over the place and each of them have oysters that they favor as well as clients who favor particular brands,” Lewandowski said. “A lot of the times, those brands have catchy names or they’re marketed creatively. We wanted to ensure that when we do have an inland bays oyster product ready, we can compete in that market place by positioning it with the brand, the logo, and the catchy name.”

Francesca Piccone, a graduate of CEOE and current CEAE outreach coordinator, said the researchers tested the consumer response to a logo bearing the words “Inland Bays Oysters: A Southern Delaware Delicacy” underneath a picture of an oyster to see if people were willing to spend more money on oysters branded that way.

They also focused on demographics to see who would pay more for oysters and what kind of information would make them more inclined to do so.

“We found that local is an effective word that increased consumer demand for oysters. The consumers’ willingness to pay for oysters also changes depending on which body of water they were grown in,” said Piccone.

Messer said many foods, such as oysters, are moving away from being a generic commodity to a specific brand.

“Recall the history of coffee in the U.S. It used to be a commodity – a couple of big companies put coffee into a big blue or red can that contained coffee from all over the world that was mixed together and sold at a low price. Now you have many coffee companies and they will sell you coffee from a specific location. It could be Sumatra, Costa Rica, or even specific farms in Mexico. These coffees are sold at a higher price,” said Messer.

The same is true for oysters, as consumers are looking for oysters from specific locations.

“More often than not, oysters are branded according to geographic location where they came from,” said Lewandowski. “There are Cape-May oysters, Chincoteague oysters, Bluepoint oysters out of Long Island, so using ‘Inland Bays Oysters’ definitely identifies it as a local product specific to Delaware’s inland bays.”

Messer said naming conventions will be important for oyster growers in Delaware to understand when they introduce their product into the market.

“What kind of names could resonate to both Delaware residents to tourists? One would anticipate that tourists would be very interested in buying a local oyster. Just like you have your local beer, you have your local oyster to go along with it. It could be a good chance to not only sell Delaware oysters but get a higher price for this product because now it’s a branded name and it’s something that you can’t get elsewhere,” said Messer.

Messer stressed that getting information that can benefit the Delaware oyster aquaculture is of the utmost importance for an institution like the University of Delaware.

“It’s fundamental to what we do. Public money paid for our research and this has public benefits for getting the oyster industry going, and it could improve water quality in our own state plus create jobs,” said Messer. “You can’t get that in many other contexts. I feel it’s imperative upon researchers to take the extra step to engage with their constituencies to share those results and I was happy to do it.”

Additional funding and support for the research and the workshop was provided by the Delaware Economic Development Office (DEDO), Ed Kee and the Delaware Department of Agriculture, Delaware NSF EPSCoR, the Center for Behavioral and Experimental Agri-Environmental Research (CBEAR), the Delaware Environmental Institute (DENIN), the Cape-May Lewes Ferry and the National Oceanic and Atmospheric Administration (NOAA).