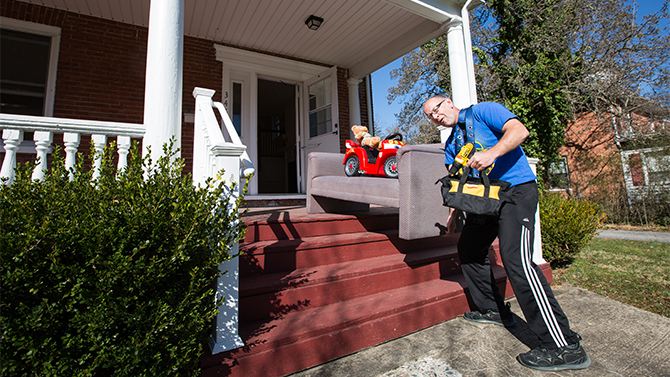 Toolbag in hand, Cole Galloway moves a couch and GoBabyGo car into a community setting. 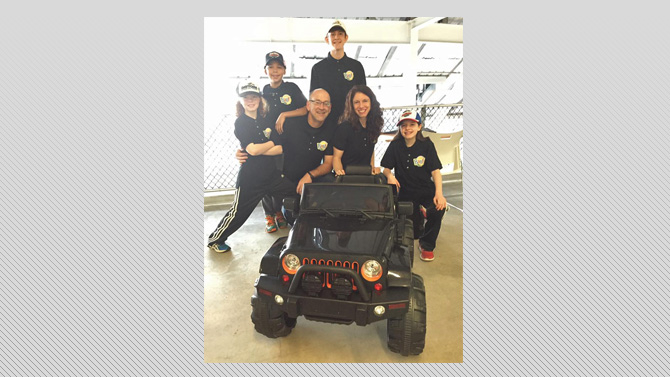 Cole Galloway and GoBabyGo went to Daytona, working alongside some of NASCAR's most famous drivers.

Keeping up with Cole

Cole Galloway’s mind is always on. An overwhelming amount of ideas ooze out of him with seeming regularity. And when your brain is constantly in overdrive, your body better keep up. So chances are, if you’ve ever crossed paths with the University of Delaware physical therapy professor, he was in motion — running, building, sweating — pouring his mind, body and kind soul into helping people with mobility challenges.

Galloway is most famous for his brainchild GoBabyGo, a hands-on program that helps kids and adults with serious mobility challenges. Like its founder, GoBabyGo does not sit still as an organization. The program now boasts chapters in more than 40 locations — from high schoolers in Delaware to clinicians in Israel to community organizations in New Zealand. Cole is in-demand as a presenter — traveling the friendly skies with regularity. As this writer can attest, every time one Skypes with Galloway, he pops up on screen in a different city, visiting a new organization.

Wherever he is and whatever he’s working on, the resident of UD’s Science, Technology and Advanced Research (STAR) Campus is relentlessly committed an “urgent” vision – helping all people explore their world via independent mobility.

“Social mobility is a human right. Respecting that premise sets in motion a level of urgency and impact in my research, service and teaching,” said Galloway.

Following Galloway’s travel schedule is like trying to keep tabs on Santa Claus on Christmas Eve. It is next to impossible, but there’s something magical about his impact.

A few recent examples were noteworthy. A GoBabyGo team drawn from chapters across the U.S. was on Capitol Hill to send a serious pro-science message at the National Science Foundation’s “The Arc of Science: Research to Results” event. The gathering featured NSF-funded researchers whose work provides insights, products or services to businesses, government and everyday citizens. Galloway and team members discussed their basic science studies involving do-it-yourself, low-tech interventions to members of Congress and their staffers.

“The conversation centered on the importance of science and how we move our science into the community faster. We love showing how the basic science can be a powerful tool to address community requests for better interventions for children,” explained Galloway. “Congress sees us as we are — ‘blue collar scientists,’ researchers with deep roots in the community who are addressing challenges that impact kids and families every day.”

While in Washington, he also spent time outlining a new Gravity restaurant and Mobility Village with representatives from the National Institutes of Health and area GoBabyGo chapters. Both concepts build on the research and experience at the GoBabyGo Café, a rehabilitation and vocational training environment pioneered on the STAR Campus.

Both projects would bring traumatic brain injury (TBI) survivors and caregivers together to work with faculty and students from across campus. The interdisciplinary lineup would include those interested in community programs, wellness, rehabilitation, neurosciences, engineering and business.

He isn’t giving too much away quite yet, but you can imagine Mobility Village as the tangible incarnation Galloway’s busy brain — all with the goal of mobility and sociability.

“Mobility Village is a user-centered collaborative that places the TBI survivor as the CEO of their own small business. All supportive services are then provided in support of progressing that business,” Galloway said. “We are launching this effort with the ultimate goal of completely redefining how TBI survivors re-enter the community.”

The goal is not to stop when the person is “medically stable.” Rather, Galloway wants TBI survivors to move beyond the “patient” label.

“They can become lifelong learners — just like the rest of the community,” he said. “They’ll learn to move, communicate, plan, thrive and contribute. We believe that the educational model, the University, may well be a viable, cost effective improvement on the current medical model for meaningful community re-entry.”

From the national’s capital to the oval battleground of NASCAR, Galloway and a UD team headed south to Daytona for the biggest race of the year. Partnering with corporate sponsor Axalta, the GoBabyGo team put together one of its highest-profile ride-on car builds to date — this one held in the enormous, pre-race Fanzone.

“Picture a regular GoBabyGo workshop wrapped in a star-studded event,” he said.

Those stars included NASCAR legends Jeff Gordon, Dale Earnhardt Jr., Jimmie Johnson and Kasey Kahne. These drivers and volunteers from multiple corporate sponsors helped build modified, ride-on racecars. As with the hundreds of previous GoBabyGo workshops, the event produced a dozen cars that were given to children with impaired mobility due to disorders such as cerebral palsy and Down syndrome. The event ended with a kids’ race down the red carpet in their new sets of wheels.

“This award was a huge surprise,” he said. “To join the list of researchers, including UD’s Stuart [Binder-Macleod] and Lynn [Snyder-Mackler], is simply a thrill and, frankly, additional pressure to accelerate.”

But don’t expect the GoBabyGo wheels won’t stop turning any time soon, or ever. On April 22 at 6:30 p.m. at Penn Cinema Riverfront in Wilmington, Delaware, Galloway and the College of Health Sciences will take part in the inaugural screening of the film Brain Crumbs. The documentary by FarmCat Media chronicles the tribulations and accomplishments of local woman Corey Beattie following a severe traumatic brain injury. Beattie, a volunteer in the GoBabyGo! Café, has, along with her family, been critical collaborators in Galloway’s research and advocacy work.

“I will be in the front row with popcorn and Milk Duds! It will be a special night of celebration and reflection,” Galloway said. “For our team, it's a time to pause to laugh and cry, and remember our mission. Then get back at it!”