A new look for mural

In the lobby of the newly renovated Delaware River and Bay Authority building near New Castle, Delaware, Amanda Kasman and Karissa Muratore work diligently, cleaning what is known as the Micarta Mural.

The mural, named for the commercial resin that seals it, shows a map of the East Coast and is made up of six, 4-by-8-foot panels that stretch the entire length of the administration building’s lobby.

Kasman, a junior majoring in art conservation at the University of Delaware, and Muratore, a recent graduate of the program, were hand selected for this cleaning project.

The two met two summers ago on a UD study-abroad trip to Sardinia, Italy, where they worked on conservation of pre-Roman statuary. They spent the next summer cleaning, repairing, inventorying and reinstalling the contents of a 6-by-3-foot, 18-room dollhouse at Winterthur Museum. The mural is their third project together.

“It definitely helps that we have a similar work ethic,” Muratore said of their collaborations. “We do our utmost possible.”

The Micarta Mural, painted in the mid-1960s by Aurion M. Proctor, had been in storage for several years. When the Delaware River and Bay Authority (DRBA) began its lobby redesign project, the idea of using the mural as a centerpiece came up immediately. The final color scheme of the lobby, featuring blues and greens, uses the mural as its inspiration.

“We wanted to make [the lobby] a little more colorful and inviting rather than just a dull government institution,” Joseph Gibbons, the DRBA’s director of maintenance and operations, said.

Early in the redesign process, the DRBA contacted the University’s Department of Art Conservation to see if a partnership would be possible. Kristin deGhetaldi, who earned her doctorate in preservation studies last year and is supervising the mural conservation work, conducted initial tests and found that the project was suited for students.

“When we figured out we didn’t have to use noxious and potentially toxic solvents, we saw that this could be a great project for students that are involved in the program because we can do this safely and it can be done carefully,” deGhetaldi said.

The mural had not been washed since it was made, so Kasman and Muratore have been cleaning dirt that accumulated in the years it was previously displayed as well as what built up during its time in storage, which deGhetaldi referred to as a “superficial tenacious grime layer.”

The sealing material allows Kasman and Muratore to clean away the grime without risking damage to the original painting.

“In most conservation you’re going down to the paint layer itself, which has a lot of risks, for example removing paint that you can’t put back,” Kasman said. “It [this project] is satisfying because there’s not that much risk that we’re actually touching the material that he made.”

To clean the mural Kasman and Muratore use a chelator solution, a substance that is found in everyday household cleaning products, like shampoo.

“Chelators are a type of chemical that takes metals out of other substances,” Kasman said. “So this is taking the metals in dirt and removing them from the resin layer.”

The chelator is diluted in deionized water and then applied to small spaces on the mural using cotton swabs. Kasman and Muratore will do at least four passes of an area, sometimes more depending on the level of grime that has accumulated. They then rinse the area with deionized water.

“It’s really simple, which is nice, and it works so well,” Muratore said.

Cleaning such small areas at a time has allowed them to feel connected to the mural.

“Occasionally I feel like I’m seeing little details because we’re working so intently over an area,” Kasman said. “For example, we noticed that the road near Lancaster was changed and you can see the pencil line from where it was going somewhere else.”

Muratore said they also feel a connection to the artist.

“You become aware of all the marks and even what kind of brush he’s using,” she said. “I can see how many small strokes he’s using [and] where he’s made changes. It’s just a fun experience.”

In the coming weeks they will fill in spots on the mural that chipped during installation. They use special conservator paints that are water soluble, so that their work is reversible.

“If someone wants to take this out later, they can easily wash this away without affecting the painting itself,” Muratore said. “The idea is to not do any further damage. You want to conserve, not restore.”

They will continue to work on the mural for the next couple of weeks. Because the chemicals they use are not toxic, the public can view the mural and the cleaning process now underway in the DRBA building, located at the base of the Delaware Memorial Bridge.

Looking at the half cleaned mural, one can really see the change that the process has made. Kasman and Muratore said that these clear results have been one of the most rewarding aspects of the project.

“When you get a chance to actually do a treatment and get such fun results ... It’s really satisfying,” Muratore said. 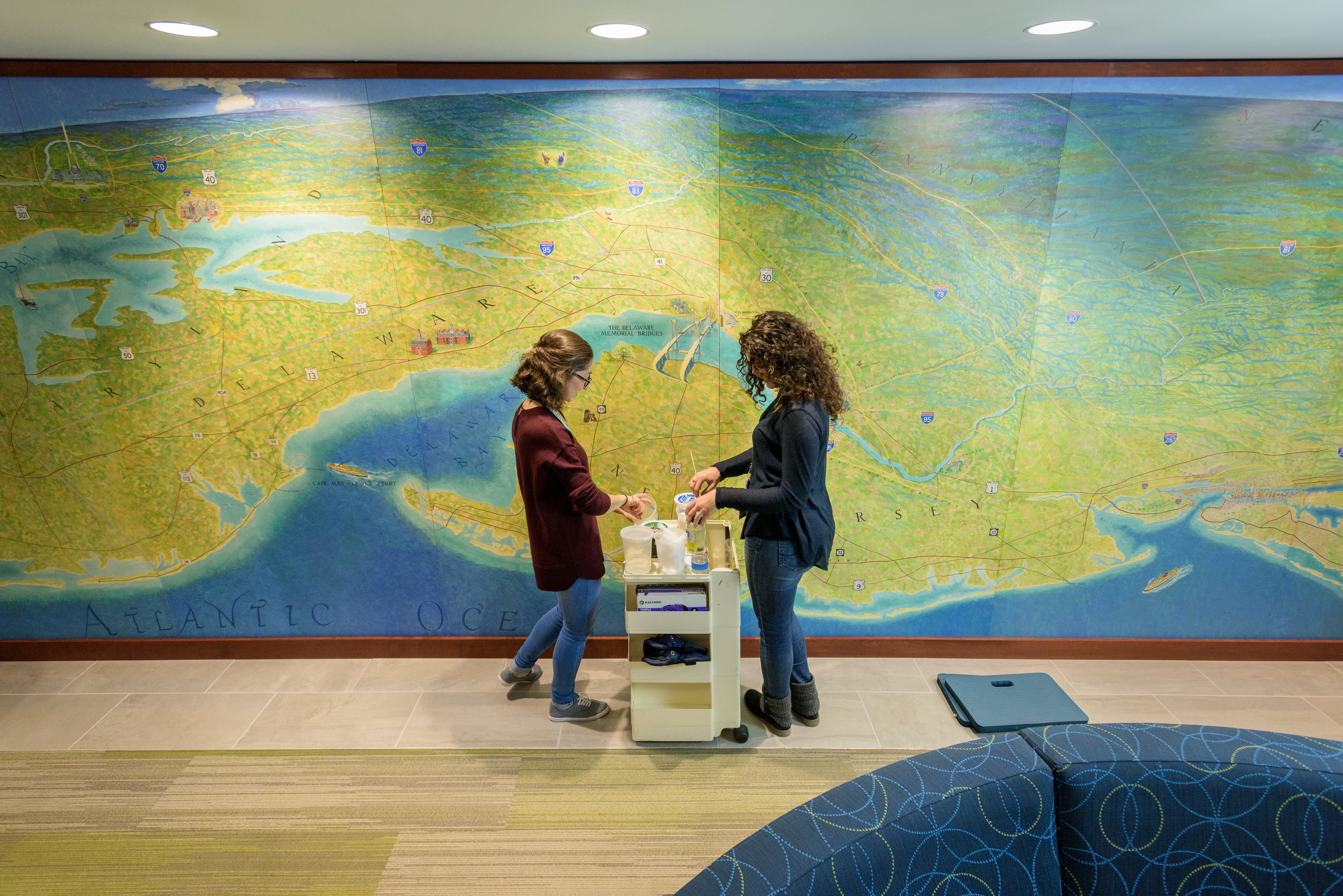 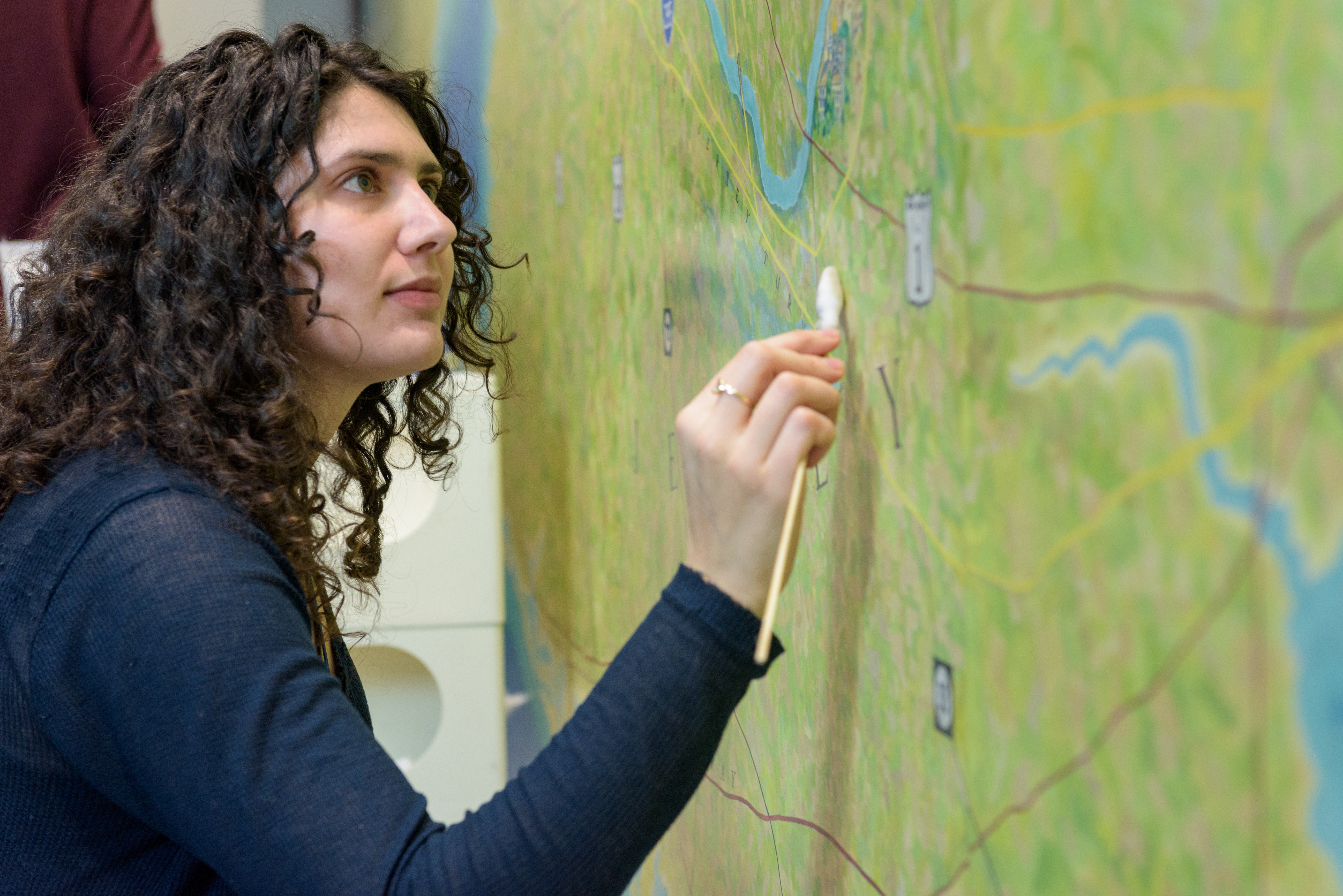 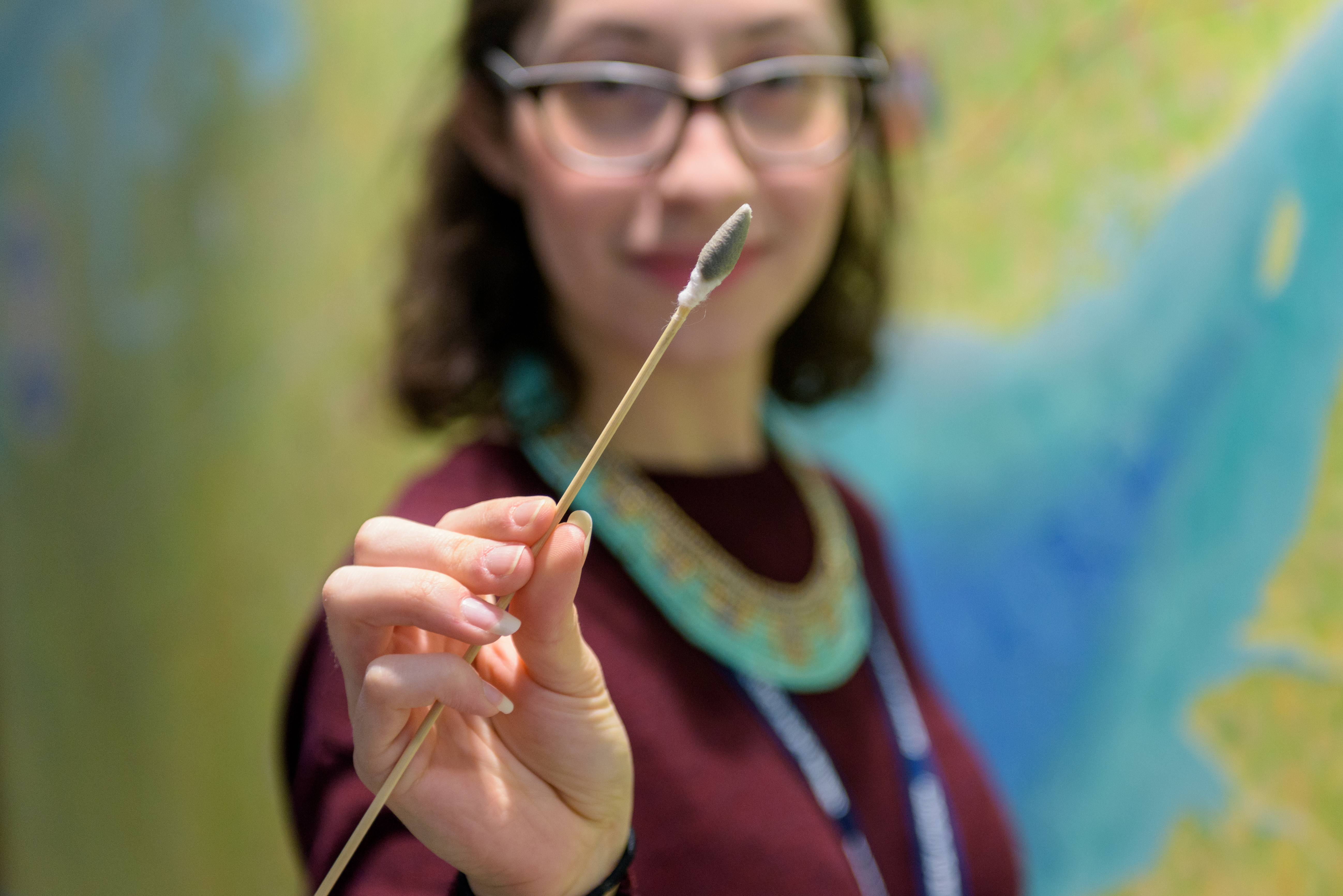 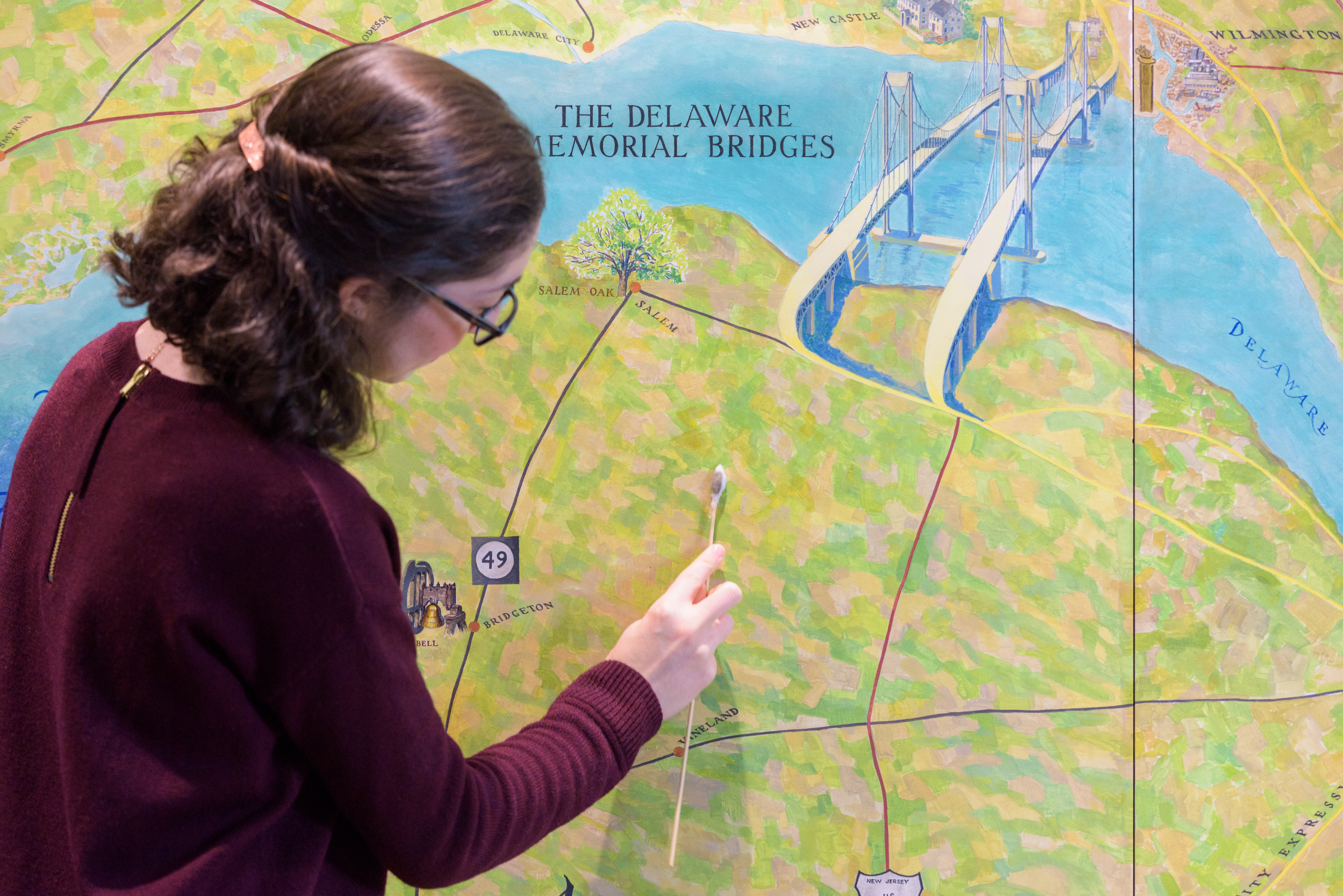 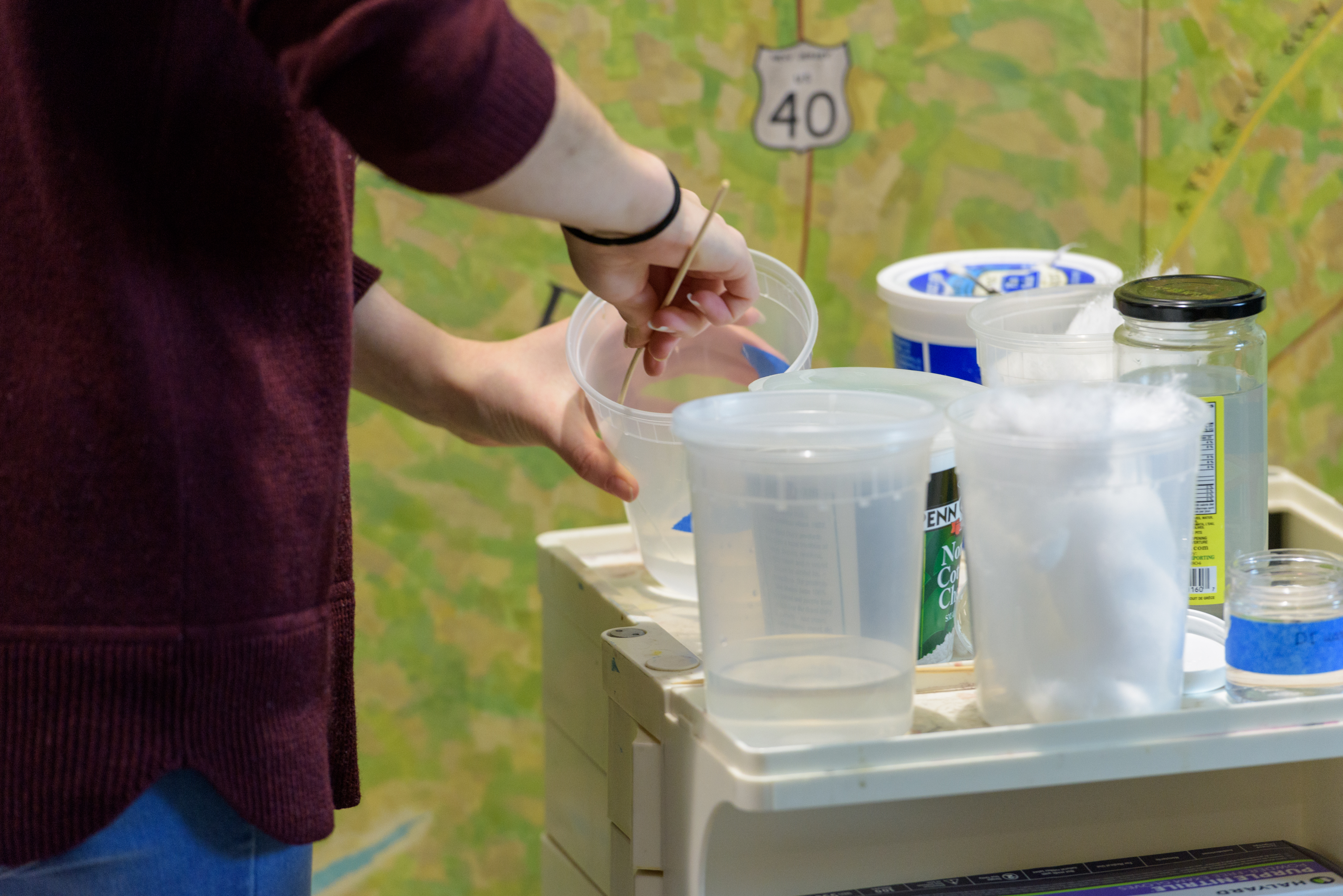 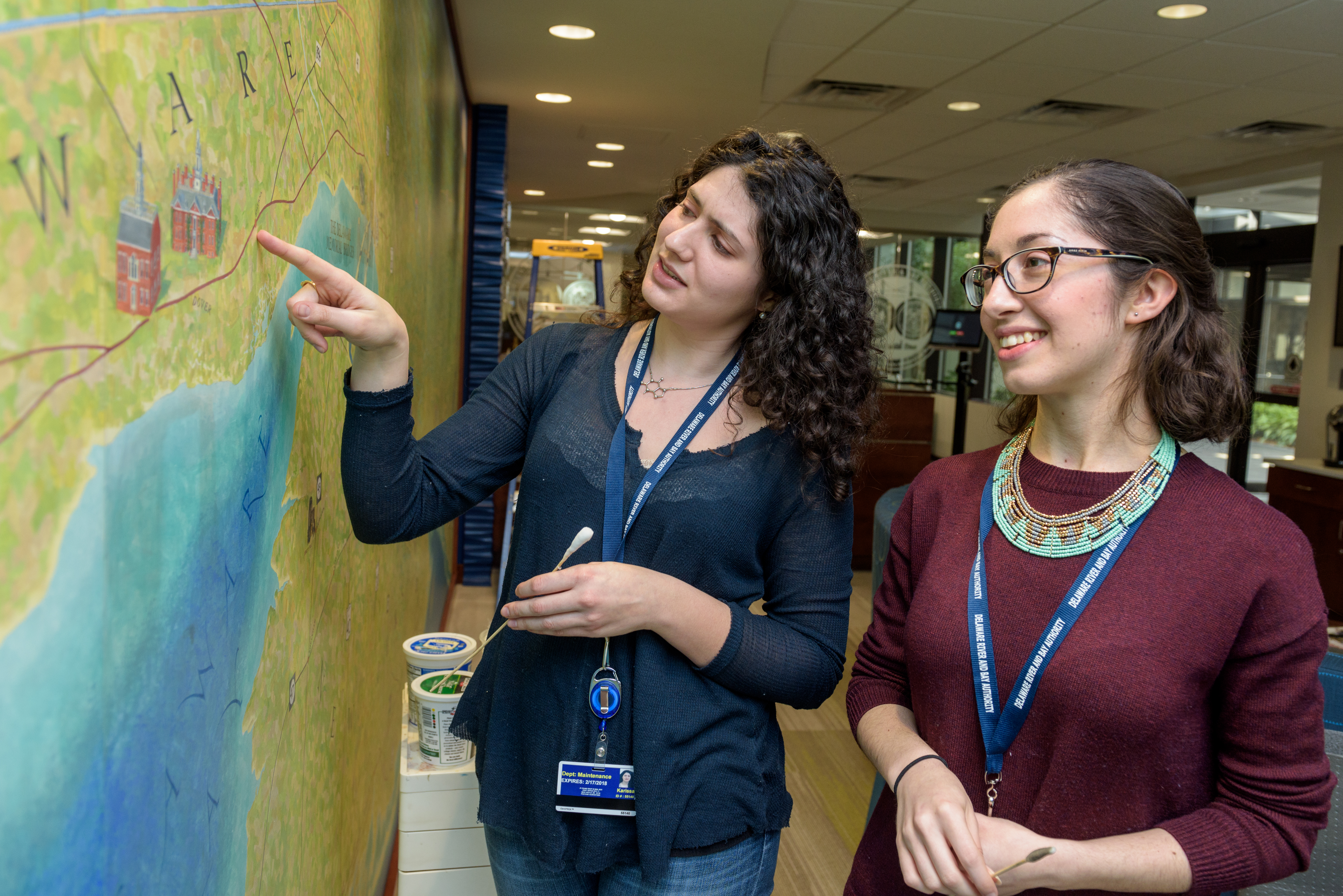 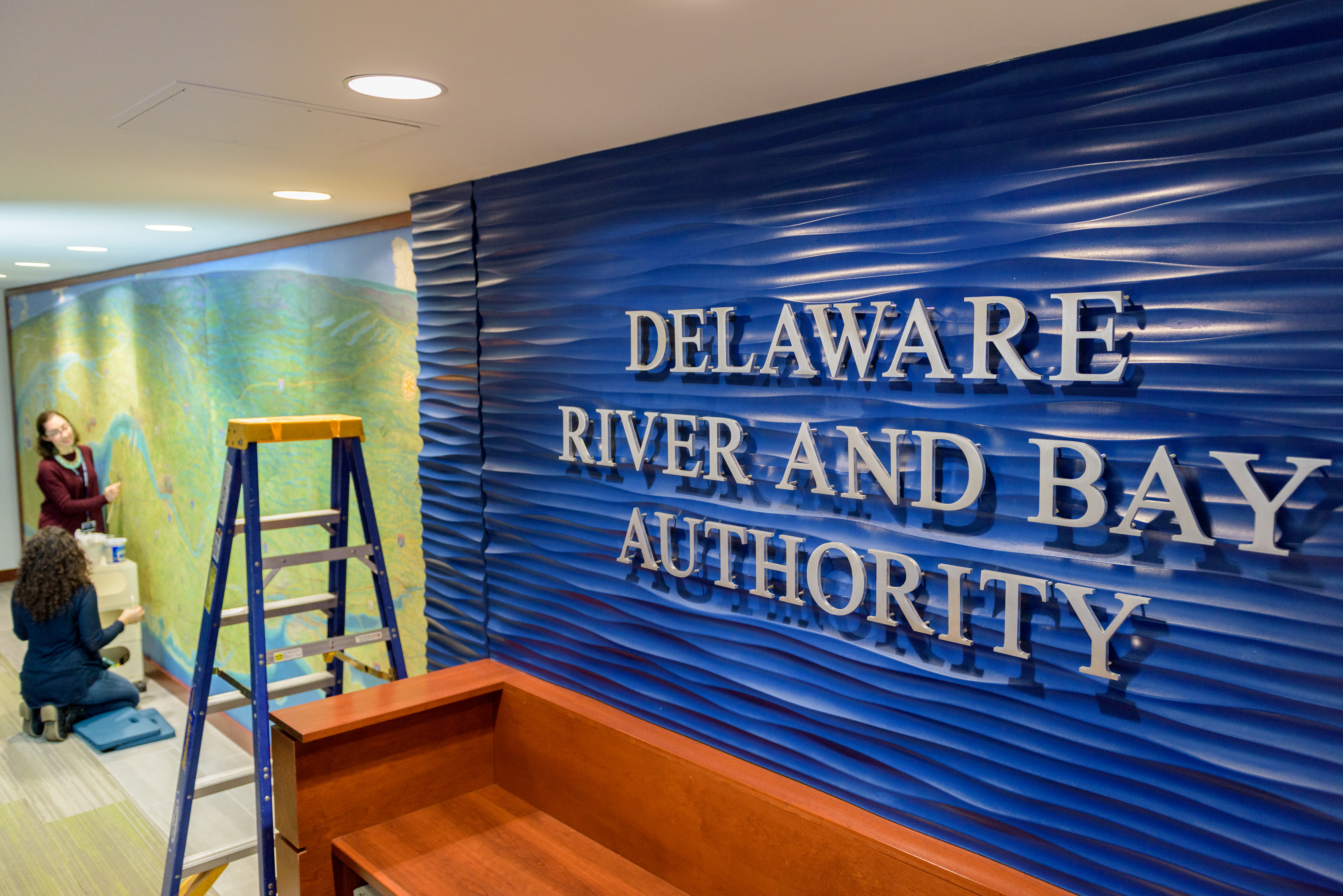