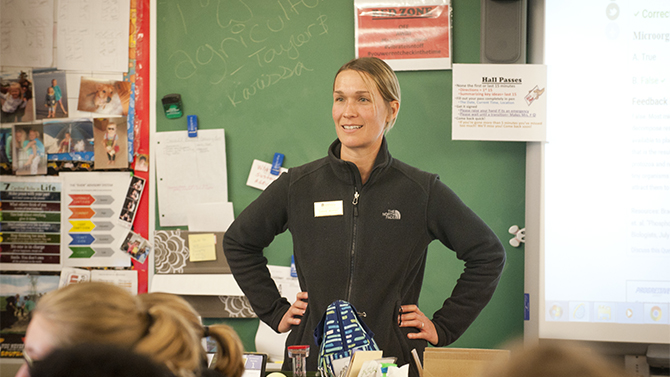 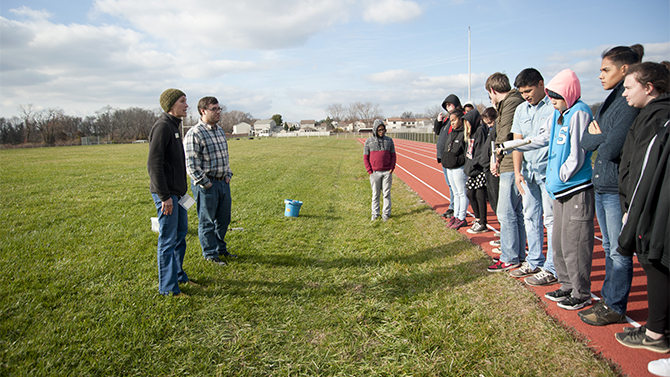 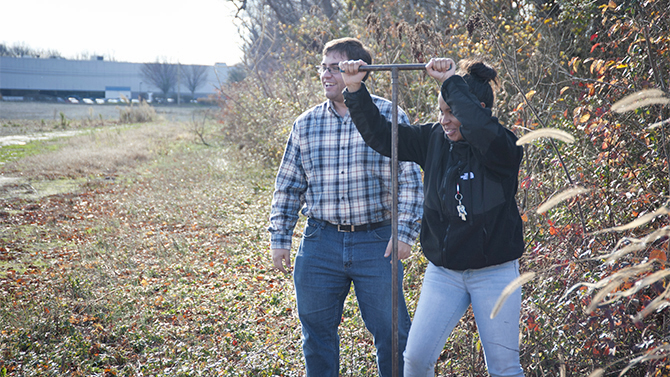 Donald Seifrit directs as a student takes a soil sample. 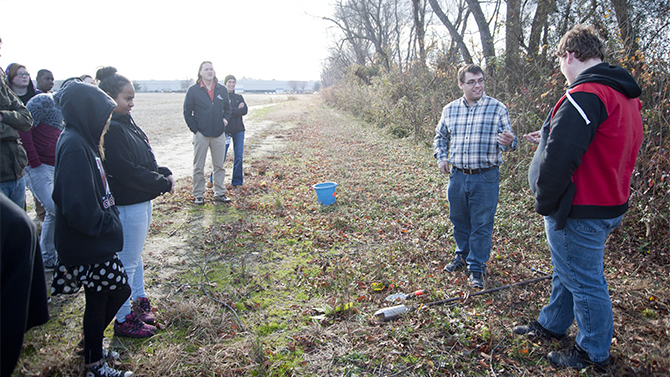 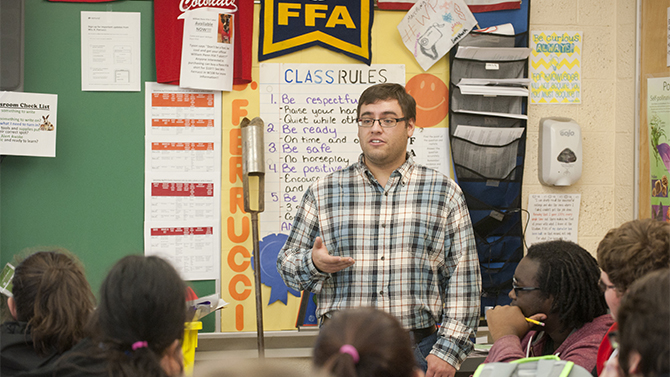 CANR teams up with William Penn High on agricultural education

Educating the next generation about where their food comes from and getting them to appreciate the process that allows food to go from farms to their tables is one of the most important challenges facing the agricultural industry today.

It is with that in mind that experts from the University of Delaware College of Agriculture and Natural Resources (CANR) and Cooperative Extension spent time at William Penn High School in New Castle, Delaware, teaching students in the Penn Farm class the ins and outs of agriculture — covering everything from plants to poultry — with hopes of reinforcing lessons they are learning as part of the course curriculum.

Carrie Murphy, extension agent and the lawn and garden program leader, and Donald Seifrit, a master’s degree student in CANR, visited the class on Dec. 5 and talked to the students about soil health. They also led an outdoor activity in which the students got hands-on experience working with soils, digging with spades and an auger — a tool with teeth at the bottom to break up rocks that can reach six feet down and pull up soil.

Murphy said the students had a lot of fun getting their hands dirty and was impressed at their willingness to embrace the learning activity.

“I handed out spades to everybody and they went ahead and started digging in the soil and we put it all into a couple of buckets and twirled it around and they got a closer look,” she said. “They were smelling it, rolling it around in their fingers, showing each other interesting things that they had found, and that helps us to have a real conversation with the kids.”

Murphy said the students were able to see soil in poor health — such as the compacted pathway that led back to Penn Farm — as compared to the healthy soil on the farm itself, which is better for growing crops.

“We could talk about the differences and help them understand why that might be important,” said Murphy.

Seifrit, who was an Extension Scholar with Murphy and hopes to one day be a teacher himself, said the students really responded to being outside and working in the field. He was eager to have the opportunity to engage with high school students, which is the age group he sees himself teaching and educating about agriculture.

“I want to show kids that it’s more than just corn and cows. For the next 50 years, when we’re supposed to hit 10 billion or so people in the world, it’s important that everyone can have good food. They should know where their food comes from and they should be involved in the process that gets people their nutrition every day,” said Seifrit.

Seifrit also said that the teachers had done a great job with the students in the class.

“They were vocal and active and it was really exciting. The three teachers we were there with have done a great job with those kids. They seemed engaged and they wanted to participate and that’s all you can ask for when you come in and present something,” said Seifrit.

At William Penn High, one of the programs in which students can study is agriculture and they are exposed to four years of sustainable agriculture both in the classroom and on Historic Penn Farm.

Through a partnership with Delaware Greenways, the school operates and manages four acres at the farm, where students grow a wide variety of vegetables. William Penn High agriculture students also plan and grow vegetables to be prepared for use in school cafeterias.

Kelly Vaughan, one of the teachers involved with the class, said it is important for the teachers to educate the students on where their food comes from.

“We don’t want them to say [the grocery store]. We want them to say a farm. Students should understand where food comes from and what goes into getting food from the farm to consumer’s tables. Farming is hard and many factors go into food production and where it comes from. We hope students gain that knowledge first hand here in our Penn Farm class,” said Vaughan.

Kathleen Pickard, a teacher at William Penn High who has been involved in the program since its inception, said that the class teaches students important skills to prepare them for college or future careers.

“Not only do students have to know how to apply what they’re learning in math class or science class to real life situations but they also need to know the soft skills such as working together as a team, getting along with others, being on time, being prepared and professionalism. Getting them college and career ready is really what the high school is all about,” said Pickard.

The students also visited the CANR campus last summer and interacted with professors from all across the college’s four departments.

Karen Ferrucci, a William Penn High teacher and a CANR alumna, said that it was great for the students to have a connection to UD.

“Being a UD alumna, I get excited because maybe it’s a professor I had or I can tell stories to the kids and make more of a connection for them so they don’t feel that college is so far off. We have such a cool connection that we’re building with Mike [Popovich] and with Carrie and a lot of the professors we meet with in the summer. A lot of the kids are like, ‘Wow. I didn’t know UD did this or UD did that.’ It’s just kind of closing the gap for the students,” said Ferrucci.

Pickard said that visiting UD and having professors and professionals come out to the class helps take the scare factor out of applying to college.

“A lot of the kids are reluctant to fill out that application or take that SAT because they’re afraid, and just walking around the campus, interacting with the students and with the professors, taking a mini-course, it just really was exciting for them,” said Pickard.