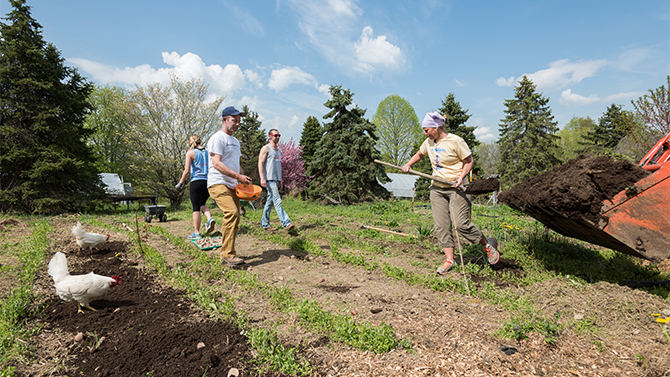 McKay Jenkins (in blue ball cap) and students working at a small organic farm near Newark in 2015. 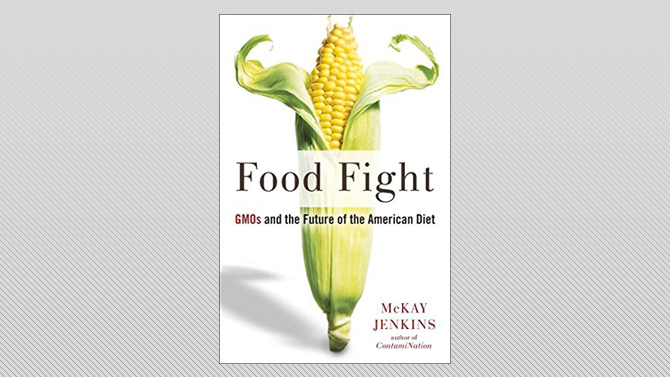 University of Delaware Prof. McKay Jenkins began researching the topic of genetically modified organisms — GMOs — in an effort to answer the same simple question that many Americans have about these controversial foods: Are they safe to eat?

But he found that the answer was far from simple. And in fact, he decided, that might not even be the right question.

In the new book Food Fight: GMOs and the Future of the American Diet, Jenkins first examines GMOs themselves and the process of genetic engineering, but he moves on to much broader issues involving the U.S. diet, food supply and agriculture industry.

The book, published Jan. 24 by Avery, contains his extensive research and interviews with scientists, farmers, activists and others with opinions on all sides of the GMO issue. Jenkins, who is Cornelius A. Tilghman Professor of English at UD, is a well-known journalist and author on environmental issues and a co-founder of the University’s environmental humanities minor.

“The book starts with GMOs, but it really addresses the industrial agriculture system,” he said. “GMOs can be used for very good things, like drought-resistant crops, but in the United States, they’re used almost exclusively to make industrial food. The GMO technology didn’t create the system, but it ramped it up.”

The genetically modified ingredients that make up much of the food sold in the U.S. may not directly harm the person who is consuming them — which is the consensus, though not a unanimous one, among scientists — Jenkins said.

Food Fight, however, explores associated issues that may be harmful to individual health and the larger environment. These include the herbicides that are sprayed on crops engineered to resist them and the increasingly centralized agricultural production system in the U.S., dominated by huge expanses of Midwest land devoted entirely to corn and soybeans, Jenkins said.

Those two crops are almost all genetically modified and are found throughout the American diet even in places where consumers may not be aware of the GMOs, he noted. For example, he said, corn syrup has largely replaced sugar in processed food, fast food is fried in soybean oil, and large amounts of corn are used as animal feed.

“Clearly, genetic engineering has the potential to help solve some of the world’s pressing food and nutrition problems,” Jenkins writes. “The problem is that this technology is mostly being used not to help small farmers or improve nutrition in the developing world but to create profits for companies selling poor-quality food in the United States.”

In researching the book, Jenkins traveled across the country visiting research laboratories and farms from the Chesapeake Bay to the Rockies. In Hawaii, he interviewed a man credited with single-handedly creating a genetically modified papaya seed that saved the industry and the livelihoods of thousands of Hawaiian farmers.

On the other side of the debate, also in Hawaii, he described experimental corporate farms and the nearby residents who are worried about chemicals being sprayed on those fields to test new agricultural products.

Jenkins presents the varying perspectives of everyone from plant scientists to small organic farmers and finds some moderate viewpoints in the often-polarized GMO debate.

“Not everyone agrees, but I think there is a possible middle path, where GMOs can be part of a sustainable agriculture system,” he said.

Food Fight also mentions some of Jenkins’ UD students who volunteered at a small organic farm while taking his environmental journalism and literature classes. The students almost universally described an experience that made them realize how little they had previously been connected to information about where their food originated.

“The feeling that I got every time I went to the farm is unexplainable,” one student wrote in her class diary. “I now think about everything I do, everything I see and everything I eat in a completely new perspective.”