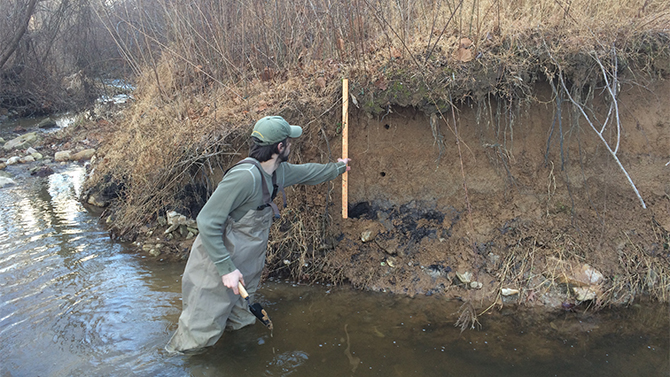 Incised and exposed stream bank highlighting the light-colored legacy sediments above the dark, pre-colonial horizon. The stream is a tributary of the Big Elk Creek in Maryland. 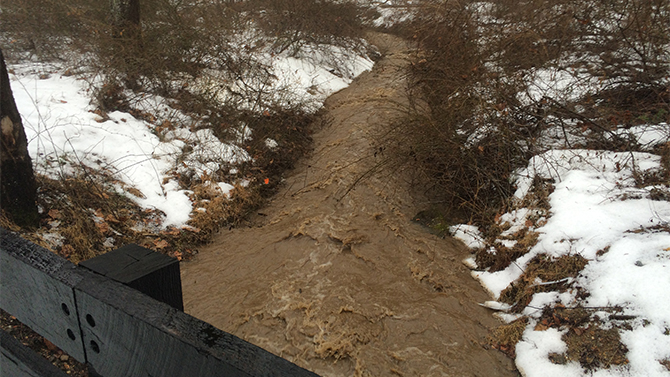 High sediment concentrations in a runoff in a second order Piedmont forested stream, a tributary of Big Elk Creek in Maryland, following an intense winter rainfall event, Feb. 16, 2016. The storm event followed a period of freezing conditions associated with the polar vortex dip in early February.

A University of Delaware researcher has been awarded a $499,500 grant from the United States Department of Agriculture (USDA) to determine if stream-bank legacy sediments are significant sources of nutrients to surface waters and investigate how they may influence microbial processes and nutrient cycling in aquatic ecosystems.

Shreeram Inamdar, professor in the Department of Plant and Soil Sciences (PLSC) in UD’s College of Agriculture and Natural Resources and director of the Water Science and Policy graduate program, will be joined on the project by Jinjun Kan, a microbial ecologist from the Stroud Water Research Center (SWRC) in Avondale, Pennsylvania.

The significance of legacy sediments was highlighted in a study published in 2008 in the prestigious journal Science by Robert Walter and Dorothy Merritts from the Franklin and Marshall College in Pennsylvania.

They brought attention to large stores of legacy sediments in the valley bottoms of the Mid-Atlantic and eastern U.S. which are visible along stream banks as a light-brown colored soil horizon — usually 1-3 meters in depth — underlain by a pre-colonial, dark, organic layer.

Walter and Merritts attributed the legacy sediments to a combination of widespread colonial era activities such as large-scale erosion from agriculture, forest removal and the construction of numerous mill dams on streams and rivers in the region.

Most of the dams have since breached and eroded, resulting in contemporary streams that are highly incised with exposed vertical stream banks that are vulnerable to erosion and collapse. Indeed, anomalously elevated sediment exports from Mid-Atlantic watersheds have already been reported by numerous researchers.

Work by Inamdar’s research group in predominantly forested watersheds in Maryland has found very high concentrations and exports of fine sediments in stream runoff following intense winter storms and tropical storms such as Irene and Lee in 2011.

However, how much of this runoff sediment load originated from streambank legacy sediments is unknown and is a crucial question that needs to be addressed, as recent studies also suggest that the stream-bank legacy sediments could be rich in nutrients such as nitrogen and phosphorus.

Taken together, these observations are fueling increasing concern that legacy sediments could be an important contributor of nonpoint source pollution to our surface waters and could pose a significant threat to the health of vulnerable downstream aquatic ecosystems such as the Chesapeake and Delaware bays.

• What is the contribution of stream bank legacy sediments to suspended sediment and nutrient exports from watersheds?

• What types of hydrologic and storm-event conditions are responsible for legacy sediment erosion and nutrient contributions to runoff?

• What is the fate of legacy sediments after they are deposited on the floodplains and/or in the fluvial network?

• What is the microbial community composition of stream-bank legacy sediments and how does it influence nutrient transformation and cycling in stream ecosystems?, and

• What is the bioavailability of legacy sediment/nutrients and what implications do these inputs have for aquatic ecosystems?

The study will be conducted in the Big Elk Creek watersheds in Maryland, where Inamdar has conducted research on various aspects of water pollution, watershed processes, and climate variability for the past 11 years.

The watershed has substantial deposits of legacy sediments along stream tributaries. Stream water sampling for sediment and nutrients will be performed continuously and all year round using automated runoff samplers and in-situ, high frequency electronic sensors that monitor water quality every 15 to 30 minutes.

Various forms of carbon, nitrogen and phosphorus in runoff sediments and water will also be analyzed. Much of the monitoring infrastructure is already in place in the watersheds.

Suspended legacy sediments in runoff will be identified using a combination of methods including chemical and isotopic tracers, novel biomarkers, and microbial fingerprinting and source tracking.

Chemical and biological fate of legacy sediments post erosion will be simulated using laboratory and field studies. Legacy sediment mesocosms will be subjected to a range of moisture and temperature conditions observed typically in the field and the release and sequestration of nutrients in runoff waters will be quantified.

In order to characterize and quantify the potential of nutrient transformation processes — such as nitrification and denitrification — the researchers will quantify certain functional genes that are involved in nutrient cycling in sediments.

Results from this study will be valuable for university researchers as well as watershed managers and natural resource agencies tasked to protect water quality.

Stream bank erosion is an increasing challenge in the northeast and mid-Atlantic and many stream restoration projects are currently being implemented at considerable cost to address legacy sediments.

Inamdar and Kan will connect with federal, state, and local agencies during and after the project to convey key results and lessons from this study.  Joining Inamdar and Kan on the project this summer and fall will be two new Water Science and Policy graduate students who will conduct this research as a part of their master of science or doctoral research.