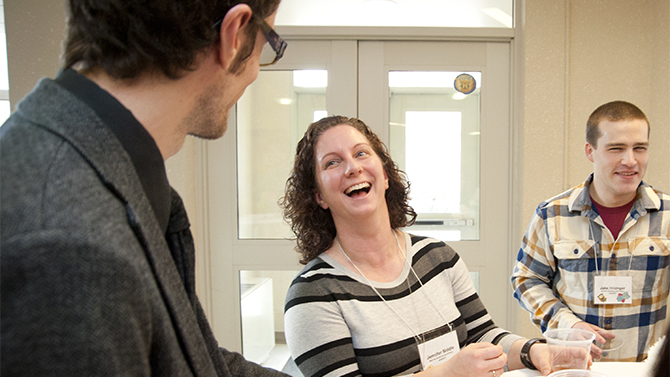 Microbiologists from around the University shared research and more than a few laughs during the Microbial Systems Symposium. Jen Biddle (center), a UD assistant professor who studies microbes in the depths of the ocean, savored some lunch-break humor before delivering the keynote address, "Deep Earth to Fish Guts."
Larissa Gaul (right), a University of Delaware undergraduate in civil and environmental engineering, talks to Lora Schell, a chemistry major at Susquehanna University, about her study of how drying methods affect the microorganisms in wastewater sludge and its potential as feedstock for production of biodiesel.
Connor Sweeney of the Charter School of Wilmington (right) was among the poster presentation award winners. The high school senior has been studying "screaming mustard" and its signal system in the lab of Harsh Bais, UD professor of plant and soil sciences.
Doctoral student Abish Regmi explains his study of how competing bacteria may gain strategic advantage in their hosts, factors that could have implications for the spread of cholera and other diseases.

You just never know what will happen at a research symposium – what new data you'll see, what sort of questions will arise or where connections will be made that produce new studies and new knowledge.

In that corner, you had a high school student explaining the ways plants may use microbes to warn their neighbors of danger. Across the way, there's a UD freshman talking about different ways of drying sludge for use in biofuels. From the podium, you get an expert's take on why it's complicated to learn about microbial communities at the bottom of the sea, how things differ at various depths and what sediment can tell you.

And from that same expert, UD marine scientist Jennifer Biddle, you get a belly-laugh question like this: Could a cow get so full of hydrogen that it blows up? No, researcher Megan Smith replied respectfully, after showing how some dietary changes affect the amount of methane gas cows give off and increase their hydrogen levels. But, Biddle replied – quoting a grad student from another lab – if that did happen, you could serve up an awful lot of Hindenburgers.

Such exchanges happen when researchers get out of their data and into each other's company. They connect over common interests, common problems and common objectives.

Soon – but not soon enough, if you ask Tom Hanson, marine scientist and interim associate director of the Delaware Biotechnology Institute – these researchers could be connected by another endeavor: UD's first microbiology graduate program. The development of this new program is supported by a grant from the Unidel Foundation, Inc.

Thousands of students with such interests graduate each year, Hanson said, looking for graduate-level study opportunities.

And why not? Microbiology is a vast and growing field and its significance becomes more apparent every day – in health, agriculture, engineering, marine science, public policy, chemistry, to name a few.

In a presentation about the new program, Hanson, a professor in UD's College of Earth, Ocean, and Environment (CEOE), said microbes outnumber humans and stars in the galaxy by orders of magnitude. Calculated another way – and he showed his work – the microbes outweigh humans by 4,945 to 1 carbon atom for carbon atom.

"Microbes ran the earth way before we got here," Biddle, assistant professor in CEOE, said in her keynote address titled "Deep Earth to Fish Guts."

Hanson said the new program would include about 40 faculty members, with concentrations in environmental microbiology, applied microbiology, physiology and genetics. Degrees will be research-based and the program will have an external advisory board from academia, industry and government to help equip students with skills and contacts to find careers in those arenas.

"There's lots of potential here," said Robin Morgan, professor and chair of the Department of Biological Sciences. "UD is in a great position with its sequencing capability and its very mature research environment."

Research is underway at every level of UD's academic endeavor and that, too, was evident at this symposium, which included students from five of the University's seven colleges. Some undergrads were discussing their research for the first time. Others were about to complete their doctoral studies. Some presenters were primary investigators with years of inquiry and experience behind them.

"My students are engineering students and there's not a lot of contact with other microbiologists naturally in our building," said Julie Maresca, assistant professor of civil and environmental engineering, who organized the symposium with Clara Chan, associate professor of geological sciences. "So this is a great place for them. They may have a problem and find someone here who has already solved it."

Fielding questions can be unnerving, but it is part of the scientific process. If UD freshman Larissa Gaul felt the pressure, it didn't show. Gaul worked in the research group of Daniel Cha, professor in the Department of Civil and Environmental Engineering, during UD's Winter Session, comparing methods for drying sludge that could be used in biodiesel production. There is plenty of feedstock for that fuel, she said, with 8 million tons of sludge produced in the United States in 2010 alone.

The problem is getting that sludge into usable condition in an efficient way. Some processes require several days' worth of low-temperature heat to treat a small amount of sludge.

As she stood beside her poster, Jean-Francois Tomb, a visiting scholar with no small amount of scientific credentials, approached. Tomb earned his doctorate in biochemistry at the American University in Beirut, Lebanon, did post-doctoral research in pharmacology and molecular biology at Johns Hopkins University, was an investigator at The Institute of Genomic Research and was a primary investigator in bioinformatics and computational biology for DuPont.

Now he had questions for her – questions about the sludge conversion process and whether the energy invested in that effort outweighed the return on investment.

"She did very well," he said later. "And I love what I'm seeing here. There is a lot of energy here. The greatness of the University – you see it here."

"We all do microbiology," said Rosa Leon-Zayas, a postdoctoral researcher who has been studying deep-sea microbial communities in Biddle's lab. "But when we're in our own little silos, we miss other perspectives."

"If you talk to the person who asked that question, you might say 'Let's work together.' That's how great collaborations are formed," she said.

• Best student talks: Kristin Yoshimura and Sean McAllister (both from the School of Marine Science and Policy).