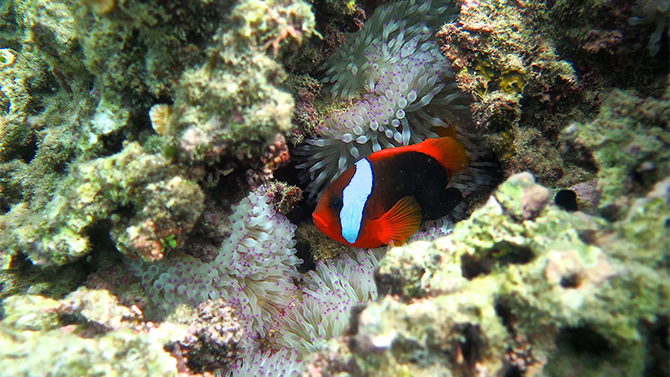 A clownfish at the Great Barrier Reef. 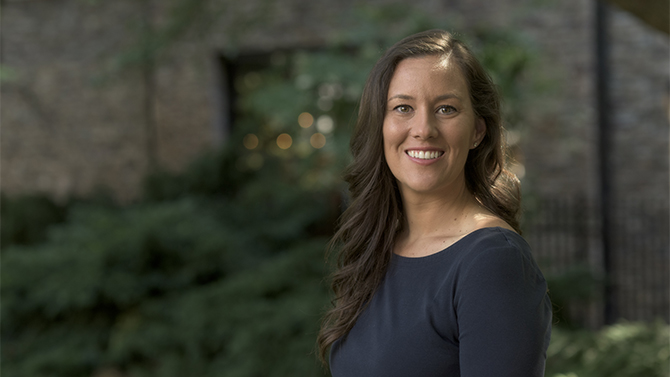 UD's Danielle Dixson has received funding from the Gordon and Betty Moore Foundation.

A $1 million grant from the Gordon and Betty Moore Foundation will allow the University of Delaware’s Danielle Dixson to further research aimed at understanding how larval marine organisms, including fishes, corals and other important invertebrates, select a coral reef habitat.

In particular, with the support of the Moore Foundation, Dixson will investigate the role chemical cues play in the decision-making process.

The new project builds on Dixson’s previous research on the sensory behavior of marine animals and how chemical cues can influence decision-making, particularly in habitat selection.

“We’re trying to gain a more complete understanding of the recruitment process, and how chemistry can be used to impact conservation,” said Dixson, an assistant professor of marine science and policy, which is housed in the College of Earth, Ocean, and Environment. If successful, the new work ultimately could lead to more effective marine management.

Collaborators on the work include:

• Valerie Paul, a natural products chemist and lead scientist at the Smithsonian Marine Station and director of the Carrie Bow Cay field station in Belize;

A 2014 paper published by Dixson in Science demonstrated that fish have the ability to tell the difference between a healthy and a degraded reef. Her research also suggests that cues on degraded reefs produce a chemical barrier to the recruitment of both fishes and corals, creating a negative feedback loop that suppresses recovery of degraded reefs.

“If we are to understand reef ecology, or to wisely manage threatened reefs, we need to recognize and understand the chemical cues promoting or hindering reef recovery,” Dixson said.

The researchers will conduct surveys during high recruitment periods at the Smithsonian Institution’s Carrie Bow Cay research station in Belize and record the composition of the benthic communities (coral, algae, sand), as well as what fish and other reef creatures — and their predators — recruit to these communities. This data will provide a picture of what is different on high recruitment reefs and low recruitment reefs.

Armed with this information, Dixson will run chemical tests on coral larvae from the high recruitment reef to determine whether the larval organisms are behaviorally responding to specific chemical cues from the benthic community. She also will test whether low recruitment reefs are giving off negative recruitment cues by placing larvae in a choice flume and recording which water the larvae prefer.

Fieldwork on low recruitment sites to remove the negative cues and to outplant the positive cues in side-by-side plots will complement the laboratory experiments and enable the research team to gauge which strategy is most effective at improving recruitment of target fish species on the reef.

An overlooked part of the story

According to Dixson, one often-overlooked part of the story may be the fact that fish recruit to coral reefs in high numbers at night. She theorizes that this is due to high predation during the day since fish larvae are essentially plankton and a high number of planktivores (fish that eat plankton) are generally diurnal, meaning they are awake during the day and sleep at night.

Recruitment levels are highest when light levels are lowest, around the new moon, so scientists typically do surveys the next day, but what if the data only includes fish that survived the night?

“The reef with low recruitment could have high recruitment but low survivorship and scientists just don’t know it because they surveyed at the wrong time,” she said.

Dixson also will perform a set of nighttime patch reef studies to evaluate whether fish settlement selection is affected by predators, the presence of fish of the same species, or the topography of the coral itself.

Information collected through the research will be used to develop more effective marine management strategies. Specifically, the research team will consider how the research can inform regional and marine spatial planning, conservation and restoration of coral reefs.

“If we can identify the cues that are important, especially for fish species that eat problematic algae, then hopefully we can develop strategies to improve reefs using the evolution of fish rather than marine protected areas that may not mean anything to the fish itself,” Dixson said.

To learn more about what inspires Dixson and her research focus, view the following Q&A.